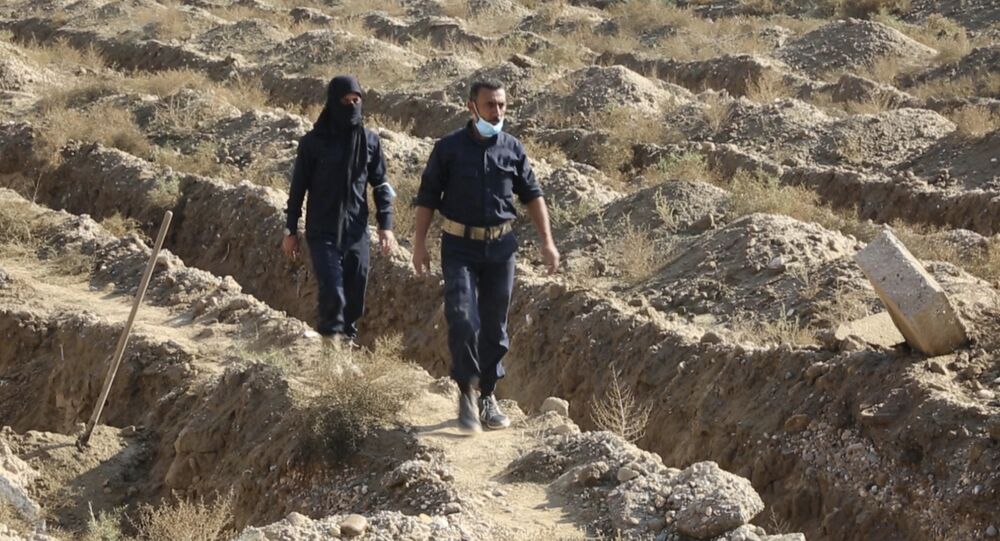 Mass Grave of 3,500 People Found Outside Former Daesh Capital is Largest Yet

Syrian authorities have uncovered a mass grave of 3,500 people outside the city of Raqqa, the former capital of the Daesh terrorist group. The find is by far the largest such site uncovered as Damascus reestablishes control over the country in the civil war that has raged since 2011.

The bodies lay in both a giant mass grave on a plot of farmland and also in individual graves: many are clothes in the orange suits Daesh robes its victims in before executing them.

"These are individual graves, but behind us, by the trees, are the mass graves of those executed by Daesh," said Asaad Mohammad, a forensic assistant at the site, gesturing to a group of exhumed pits.

Syrian authorities first learned of the site last month, in a suburb of the city called al-Fukheikha, AFP noted.

First seized from the Syrian government by the al-Qaeda affiliated al-Nusra Front in 2013, the city fell the following year to Daesh, a rival Islamist group seeking to establish what it called a new "caliphate" in the Levant. Daesh established the city as the de facto capital of its rogue state in eastern Syria and northern Iraq, but amid heavy attacks by Syrian, Russian, US and Kurdish forces that destroyed much of the city, the Kurdish-dominated Syrian Democratic Forces recaptured Raqqa in October 2017.

© AP Photo / Emrah Gurel
'What Kind of Alliance Is This?' Erdogan Blasts NATO Over Arms for Syria's Kurds

Since then, Syrian authorities have discovered at least eight mass grave sites around the city. One found in the Panorama area of Raqqa last October contained at least 1,400 bodies, Sputnik reported.

"These mass graves hold the answers to the fate of people who had been executed by Daesh fighters, who died in coalition air strikes or who have been missing," Sara Kayyali of Human Rights Watch told AFP.

It's unclear who exactly is in the mass grave site. Some are undoubtedly execution victims of Daesh, including the city's Shiite population, whom Daesh declared were not Muslims but apostates. The militant group destroyed the Uwais al-Qarni Mosque, a holy pilgrimage site for Shiite Muslims, shortly after establishing control over Raqqa in 2014.

Others buried could be casualties from the war, including the indiscriminate bombardments carried out by US forces, which have been heavily criticized by human rights groups like Amnesty International.

"It is deplorable that the US-led Coalition continues to ignore its responsibility over carrying out meaningful investigations into the hundreds of civilian deaths it caused in Raqqa and elsewhere — even as it starts to withdraw from Syria," Lynn Maalouf, Amnesty International's Middle East research director, said in a statement last month. "The Coalition is unashamedly ignoring the devastating legacy of its bombing campaign, adding insult to injury by making clear that it has no intention of offering survivors any form of remedy or compensation."

Daesh has been steadily pushed back under assault from multiple sides to an enclave on the Euphrates River near the Syrian border with Iraq. On Thursday, US Secretary of State Mike Pompeo said that the US-led coalition was "only hours away" from seizing Daesh's last stronghold, al-Baghuz Fawqani, Sputnik reported.

"The same thing that happened here will have happened there," Mohammad said. "Maybe it's even worse there, because the fighting is more intense, as they've got nowhere else to go."