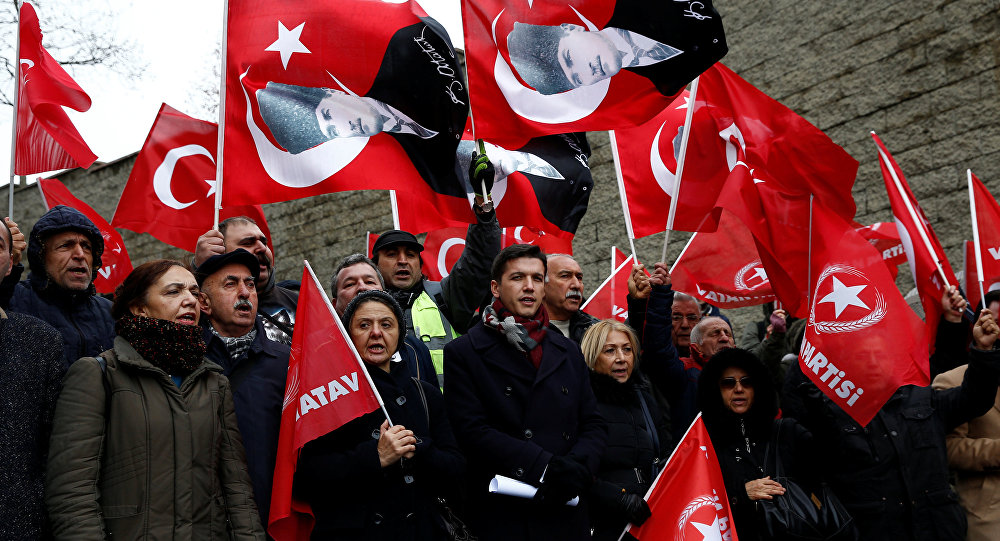 In Your Dreams! Pompeo Infuriates Turkish Netizens With Map of Divided Turkey

It's so far unclear why the map, published by the US Secretary of State on Twitter, has a border dividing Turkey in two. The State Department and other US officials haven't commented on the publication yet.

US Secretary of State Mike Pompeo shocked Turkish netizens in one of his latest tweets, where he showed the map of countries, supporting Juan Guaido, who recently proclaimed himself an interim president of Venezuela. But it was not the support for Venezuela's opposition that angered social media users, but the map that featured Turkey divided into two unequal parts with a border.

While the US State Department hasn't come up with an explanation for depicting Turkey in such a mannet, Twitterians have decided to unleash their outrage in the comments to the tweet. Most of them said that only in Washington's "dreams" Turkey will be divided.

The mark in Turkey’s🇹🇷 map may be dream of some, but exact country is our reality which is never altered!!!

You will never be able to divide Turkey! Every time you try to part us we will come back much stronger as ONE WHOLE STRONG and UNİTED NATİON!!!

Others suggested that Pompeo should go back to school for some geography lessons, since he doesn't seem to what modern Turkey's borders look like.

Do you need a basic geography education mr pompeo? I believe you ve made a ridiculous mistake on Turkish Republic map. 🇹🇷 Poor US people. With such politicians they have no future!

What about the Turkey’ map?

Many users were less polite in their outrage, suggesting the secretary of state should stick that map in place, where the sun doesn't shine.

"Shove that map up your a**, Pompeo", a user named ssssssss wrote.

"Stick that map of divided Turkey up your a**", a user named M.S. Akcay added.

US-Turkish relations have been tense since the latter announced plans for a military operation in Syria amid Washington's decision to withdraw its forces from the Arab Republic. Washington believes such an operation could threaten its Kurdish allies in the region while Ankara insists that it will target only terrorists East of the Euphrates.