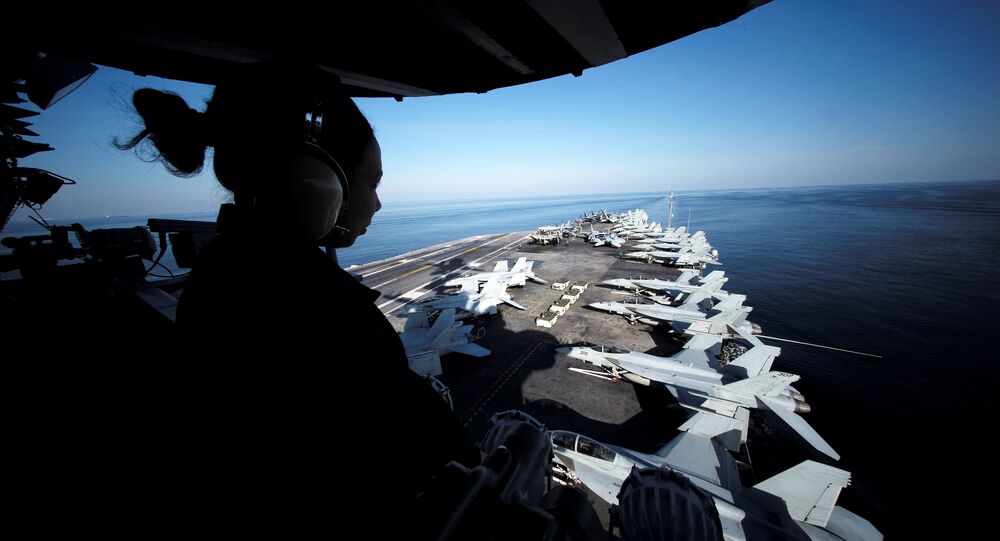 The coming arrival of the carrier group to the pivotal point of the world's oil exports was predicted by US media in early December. According to a media outlet's source the arrival of the US carrier would be "a show of force against Iran".

The USS John C. Stennis carrier strike group has arrived in the Persian Gulf, ending a long period of absence by US forces in the area. On its way to its new place of deployment, the US carrier was followed by Iranian Revolutionary Guard ships stationed in the region.

© AP Photo / Lolita C. Baldor
US to Resort to Use of Force if Iran Blocks Strait of Hormuz – Ex-CIA Officer

The arrival of the USS John C. Stennis was preceded by warnings sounded by Iran, which threatened to block the Strait of Hormuz — the only maritime exit from the Gulf and a corridor to a 1/3 of the world's oil exports.

According to an earlier report by The Wall Street Journal, the USS Stennis is expected to maintain a presence in the region for some two months to "provide a deterrence" against any potentially hostile Iranian activity in the waters and as "a show of force".

Relations between Iran and the US have deteriorated since US President Donald Trump announced Washington's decision to withdraw from the 2015 nuclear deal with Iran and to re-impose sanctions on the Islamic Republic. Iran's military leadership has consistently warned against limiting the country's energy exports, threatening to close the Strait of Hormuz, which serves as the strategic waterway between Middle East crude producers and key world markets.