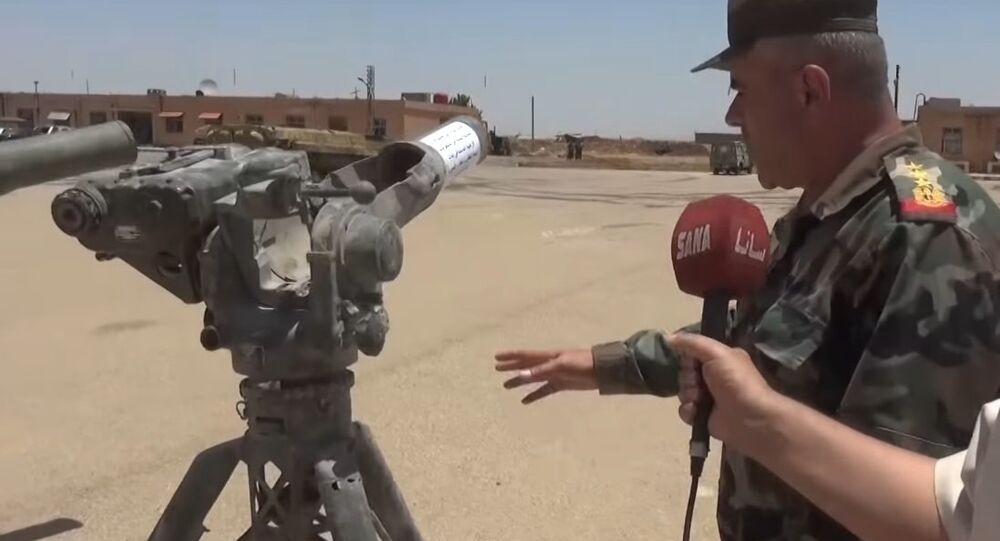 The Syrian Army has gotten its hands on another huge cache of weapons and ammunition, including US-made TOW anti-tank missile systems, chemical warfare, minesweeping and communications equipment and even armored vehicles. Some of the supplies appear to be brand new, as if militants did not get the chance to use them against government forces.

The weapons and equipment were surrendered to Syrian troops by militants in Daraa, southwest Syria, who handed over the haul in accordance with a recently signed reconciliation agreement.

The Syrian Arab News Agency posted a video report of the find, with footage showing everything from tanks and armored personnel carriers to RPG launchers, shells, gasmasks, minesweepers, mortars, heavy machinegun emplacements and TOW launchers, along with boxes which appear to be supplies for Free Syrian Army militants from the United States.

© Sputnik / Michael Alaeddin
Russian Military Resumes Talks With Armed Groups in Southern Syria - Reports
Over two dozen towns and villages in southwestern Syria accepted a surrender deal with Damascus following days of negotiations brokered by the Russian military. The deal saw militants from the Free Syrian Army giving up their fight against the government and siding with the army in their operation to mop up the remnants of Nusra Front* and Daesh* forces in the region. The Syrian military launched an offensive in southern Syria in recent weeks amid constant militant shelling of the cities of Daraa and As-Suwayda.

The Israeli military reportedly drew "red lines" on Sunday amid the fighting, demanding that Damascus stick to a 1974 disengagement agreement which provides for a buffer zone between the two countries. Israel has beefed up its presence near the Golan Heights with tanks and artillery, but promised to stick to a policy of non-intervention in the Syrian conflict.

*Terrorist groups outlawed in Russia and many other countries. Nusra Front is an offshoot of the al-Qaeda terrorist group.

Syria: The Drama in Daraa