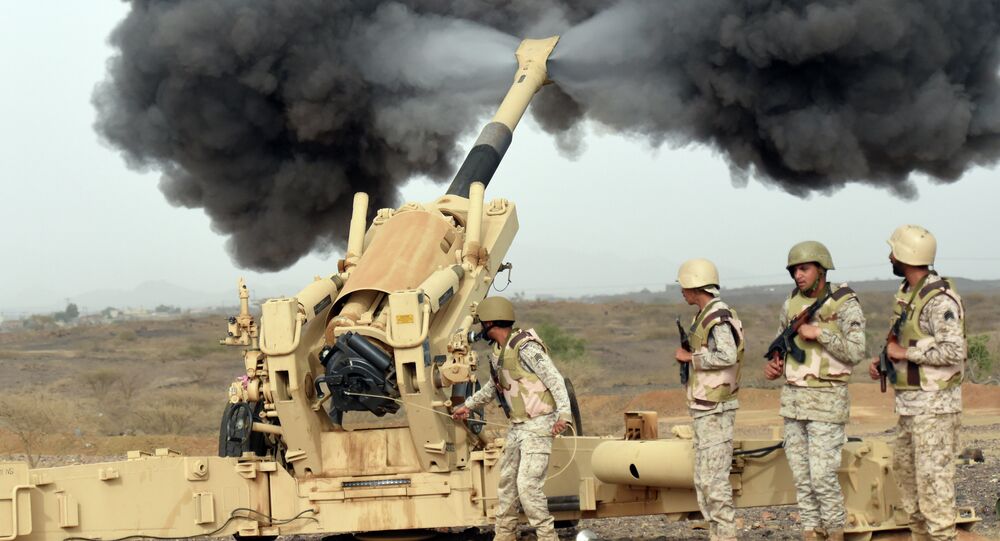 The prince, who describes himself as an “opposition member” and has been living in Germany for several years with no direct contact to the Saudi Royal Family, is used to being interviewed, providing provocative "insights" into the life of the Kingdom’s rulers.

A distant member of the Saudi Royal Family, Prince Khaled bin Farhan Al Saud, who hasn't set foot in his home country since 2013, has shared his stance on the situation in Saudi Arabia in an exclusive interview with the Middle East Eye on Monday.

“I would like to say to Europeans that the situation in Saudi Arabia resembles a volcano that is about to erupt. And if this volcano erupts, it will not only affect the situation inside Saudi Arabia or in the Arab region, but it will also have an effect on you too. This is because Saudi Arabia is diverse in terms of its make-up, whether it's tribal, societal or even generational,” Prince Khaled bin Farhan told the Middle East Eye.

He went on to explain that a coup in Saudi Arabia could “easily” make the Kingdom a hub for global terrorism, as there is a lack of intra-Saudi cohesion.

“So, if Saudi Arabia descends into a state of chaos, there will be global chaos, and it [Saudi Arabia] will be a source of terrorism for the entire world as it will support and sustain international terrorism,” he claimed.

The prince also warned that Europe and the US would have to “foot the bill” of the collapse of the Saudi state, which he said is the direction the country is headed.

Discussing last year’s anti-corruption campaign, which was believed to be led by Mohammed bin Salman, who has been hailed in his home country and abroad as a liberal due to major reforms aimed at liberalizing the Saudi society, including providing women with more rights, Prince Khaled bin Farhan said, “It was a shock for the entire family because prominent figures in the family were detained in a way that held a great deal of humiliation. It was a shock for the entire family. The family is now facing the undermining of its standing in the eyes of the people. And this will inevitably undermine its legitimacy.”

© AP Photo / AP Photo/Amr Nabil
Analyst Criticizes Arrests of Women Activists in Saudi Arabia: 'It Was Surprise for Some in West'
He proceeded to say that the princes and businessmen were lured to the hotel under the pretext of meeting the king.

“And [the authorities] records their conversations whether on the phone or directly with a person. So they are under personal, severe and humiliating surveillance inside Saudi Arabia and they are not allowed to leave,” Prince Khaled bin Farhan claimed.

Saudi authorities have not confirmed that they prevented any of the Carlton Ritz hotel ex-detainees from leaving the Kingdom as the exiled prince, who has had a turbulent relationship with the ruling family, said.

The prince heavily criticized Mohammed bin Salman’s major anti-corruption campaign, saying “Of course, the imprisonment of the princes created a state of psychological trauma within the entire family, which is represented by two things. Firstly, they fear for their own future as a ruling family in Saudi Arabia. And secondly, they are not happy with the policies being pursued currently, the policies being pursued now which are irrational, erratic and stupid.”

He did however applaud two of bin Salman’s reforms, specifically, his decision to grant women the right to drive and his attempt to curb the power of religious authorities in Saudi Arabia.

“The first thing, allowing women to drive cars. This isn’t generosity, it is a woman’s right to drive, it’s her basic right. Second, he restricted the influence of the Saudi religious authority. This religious authority is a government organization. It is supportive of it even in matters that violate Islamic law, if we’re talking about Islamic law.”

The prince said he believed that Salman didn’t implement the aforementioned reforms to benefit the Saudi population, but only to “gain popularity” with the US and Europe.

Bin Farhan – a self-proclaimed “opposition member” – has lived in exile in Germany since 2013, when he was given political asylum within two months of arriving in the country.

Since then, he has given several interviews to the media, providing what he presented as insights into the life of the Saudi Kingdom’s Royal Family.

The prince’s rift with the Royal Family reportedly began after Khaled’s father, who became known as the Red Prince, who was put behind the bars in the 1980s, advocated a constitutional monarchy. Khaled’s father is a descendant from a clan which has no access to power, with his family living in different Arab countries since. Khaled, who graduated in Egypt, isn’t believed to have any direct contact with the Royal Family at the moment. His sister, however, is currently living in Saudi Arabia, while, according to Sharia law, she is not allowed to leave the country unless she has permission from her father or brother.