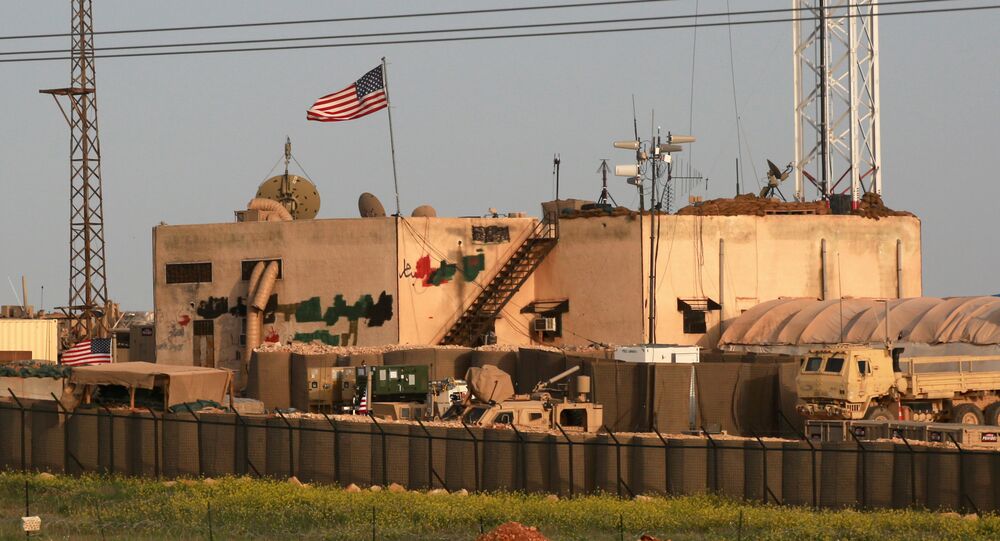 Manbij, a Syrian city in the northeast of the Aleppo governorate in northern Syria, remains the bone of contention between Turkey and its NATO allies, the US and France. Regardless of its earlier promises, the US has not only failed to force the Kurdish militia to leave the city, but has reportedly established new bases in the region.

The Syrian city of Manbij remains the only major settlement in northern Syria 30 kilometers west of the Euphrates River that is not under Turkish control.

Previously, in February 2017 the Turkish Armed Forces together with the Free Syrian Army (FSA) opposition group managed to clear the city of al-Bab from Daesh (ISIS/ISIL)* terrorists in the course of Operation Euphrates Shield which kicked off on August 24, 2016. The Turkish military campaign ended on March 29, 2017.

Later, in late March 2018 during Operation Olive Branch, launched by Ankara on January 20, 2018, the Turkish General Staff announced that it had established control over Afrin, which had been held by the Kurdish-dominated Syrian Democratic Forces (SDF).

It is the SDF and its backbone, the Kurdish People's Protection Units (YPG), who protect Manbij from a potential Turkish offensive.

© AFP 2021 / DELIL SOULEIMAN
Erdogan Vows to Continue Operation in Syria Until Kurds Leave Manbij
Ankara views the Kurdish Democratic Union Party (PYD) and its paramilitary group YPG as affiliates of the Kurdistan Workers' Party designated as a terrorist organization in Turkey. The Turkish leadership is seeking to prevent the Kurds from creating a stronghold at the Syrian-Turkish border, whatever it takes, citing national security reasons.

The Turks fear that the foundation of an independent Kurdish entity in northern Syria may prompt the Turkish Kurds who live in the southeast of the country, and comprise 20 percent of the Turkish population, to follow suit.

Thus, in March 2016 the Kurdish self-proclaimed administration declared the creation of the Democratic Federation of Northern Syria, which was denounced by Damascus as illegitimate.

Following the seizure of Afrin, the Turkish National Security Council signaled on March 28 that Ankara was ready to expand the operation further to Manbij, if the Kurdish YPG forces, supported by the United States, did not leave the region.

© REUTERS / Rodi Said
Fight Against Daesh at Stake: US vs. Turkey in Syria's Manbij
However, the US has repeatedly thrown sand in the Turkish gears by continuing to provide the Kurds, whom Washington regards as its major ground force in Syria, with arms and equipment regardless of its earlier promises to Ankara to cease this support.

On August 26, 2016, then-Vice President Joe Biden made it clear to the Kurds that they should return to the east of the Euphrates River after retaking Manbij if they want to receive further US support. Somehow, it did not happen.

Then in February 2018 US Secretary of State Rex Tillerson reiterated the US commitment to pull the Kurdish militia out of Manbij. However, as President Tayyip Erdogan's spokesman noted in mid-March, Tillerson's resignation could postpone the withdrawal of Kurdish forces from the city.

However, regardless of its earlier promises, the US reportedly sent additional troops, armored vehicles and construction equipment to Manbij on April 1. According to Anadolu Agency, the US has set up two new bases in the Manbij region and started patrolling the area on a daily basis.

Earlier, on March 29, President Trump announced that Washington may "very soon" withdraw its forces from the region.

@FuriousKurd
Trump's Vow to Pull Out of Syria is Yet Another Empty Promise – Academic
The statement has caught many by surprise, as it clearly contradicted the developments on the ground.

Meanwhile, French President Emmanuel Macron met with a SDF delegation on March 29 and pledged to provide the Kurds with military support in Manbij triggering a fierce response from Ankara, which dubbed the meeting "nothing short of hostility towards Turkey."

On April 3, the Kurdistan 24 news agency reported, citing Rezan Gilo, the joint chief of defense of Syrian Kurdistan, that an unknown number of French troops reportedly entered the border town of Tell Abyad and the city of Manbij. The newspaper claimed that the French deployment was coordinated with the US military.

For his part, the Turkish president announced on April 4 that Ankara would continue its operation in Syria until Kurdish forces leave Syria's Manbij region.

"I would like to repeat that unless we ensure security in all the regions controlled by the YPG [the Kurdish People's Protection Units] first of all, in Manbij, we will not stop," Erdogan said during a trilateral Russia-Turkey-Iran summit on Syria, which took place in Ankara on Wednesday.