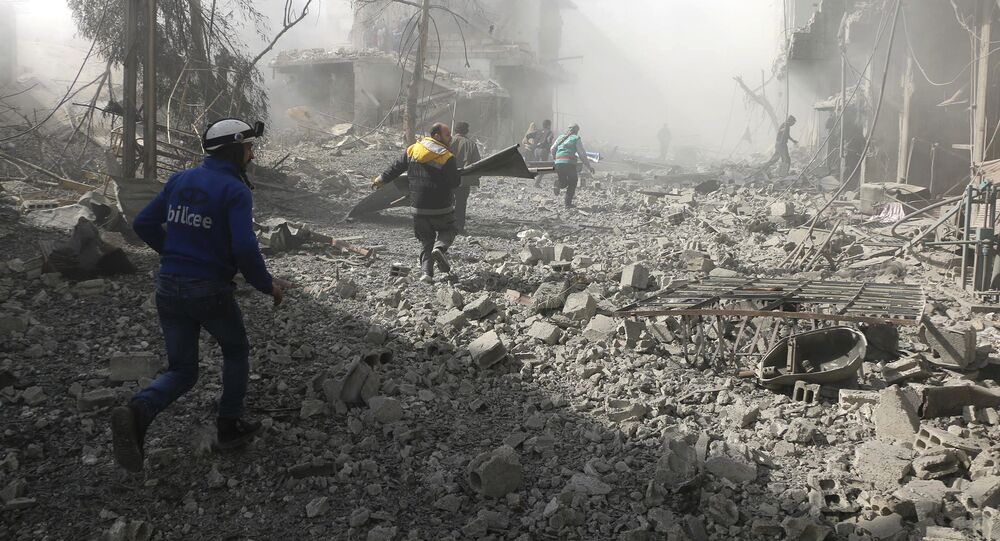 The Russian Defense Ministry assured that its Reconciliation Center in Syria guaranteed the security of civilians leaving Eastern Ghouta.

Meanwhile, the Russian Defense Ministry reported a new militant offensive against Syrian government forces, including mortar shelling on two occasions of the humanitarian corridor, with shells exploding some 500 meters from the checkpoint.

"During the humanitarian pause, militants of the armed groups [in East Ghouta] continued to attack the positions of government forces in the vicinity of the settlements of Khazram and Nawabiya, and after 13:00 they started an offensive and on other destinations. These actions were accompanied by intense artillery and small arms fire," head of the Reconciliation Center Maj. Gen. Yuri Yevtushenko told reporters.

Responding to the attacks, the head of the Russian Reconciliation Center called on all militant groups to observe the ceasefire and not prevent the exit of civilians to safe areas.

The general stated that a ceasefire would take place daily from 9:00 a.m. to 02:00 p.m., allowing all civilians to safely leave the regions of Eastern Guta.

Meanwhile, the International Committee of the Red Cross expressed its readiness to access Syria’s Eastern Ghouta and deliver aid jointly with the Syrian Arab Red Crescent, specifying, however, that it is impossible to bring in a convoy during a mere five-hour humanitarian pause.

"The ICRC, jointly with the Syrian Arab Red Crescent, is ready to access the area and deliver much-needed humanitarian aid to the people affected by the hostilities … It is impossible to bring a humanitarian convoy in five hours. We have a long experience of bringing aid across frontlines in Syria, and we know that it may take up to one day to simply pass checkpoints, despite the previous agreement of all parties. Then you need to offload the goods. In the past, we have had to spend the night in certain locations, despite the security risks to ourselves, as there was no other way to bring life-saving aid to those in need," Robert Mardini, ICRC's regional director for the Middle East Tuesday.

The humanitarian pause in Eastern Ghouta, scheduled today to last from 09:00 a.m. [07:00 GMT] until 2:00 p.m., was announced by Russian Defense Minister Sergei Shoigu on Monday, following the relevant order of Russian President Vladimir Putin. Security at the exit of the humanitarian corridor is provided by Russian military police and the Syrian army.

The pause comes in line with the UN Security Council's Saturday resolution 2401, calling on all parties to the conflict to promptly stop all clashes and adhere to a long-term humanitarian pause across the whole territory of Syria in order to guarantee the safe and unhindered supply of humanitarian aid as well as the medical evacuation of those injured.