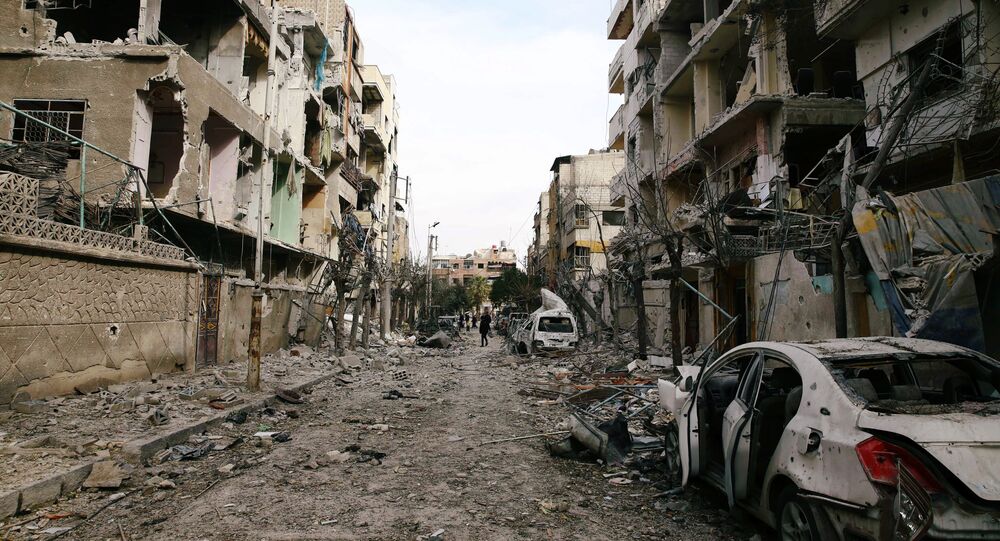 The humanitarian pause in the besieged rebel-held Eastern Ghouta area of Damascus has entered into force, according to a Sputnik correspondent.

"At 9 am on February 27, a humanitarian corridor was opened for the release of civilians from the zone of de-escalation. Currently, militants launched intense shelling and not a single civilian has come out," the general told reporters.

The Russian Reconciliation Center also added that militants had fired over 20 mines and continue to shell Damascus from Eastern Ghouta.

"Despite provocations Syrian government forces ceased fire starting from 9 a.m. and have not responded to the shelling, respecting the humanitarian pause. The Russian Reconciliation Center guarantees safety to all civilians and those injured, who are ready to leave Eastern Ghouta and urges armed groups to cease fire and not to hinder the evacuation," the reconciliation center stated.

According to Kremlin spokesman Dmitry Peskov, the time frame of the humanitarian pause in Eastern Ghouta will depend on actions of terrorist groups.

"It depends on how the terrorist groups act, depends on whether they will fire, whether their provocations will continue. It depends mainly on these factors," Peskov told reporters on Tuesday when asked about the possibility of extending the terms of humanitarian pause.

Peskov went on by saying that Russia would continue working persistently on implementing the UN Security Council resolution on Syria's Eastern Ghouta.

"Overall, quite intense work is underway, but it is regrettable, speaking about the situation in Eastern Ghouta, that out counterparts ignore the atrocities and the situation there which is provoked by terrorists who hide there and hold civilians hostage. Without doubt, Russia will continue its purposeful work on implementation of the resolution adopted by the UN Security Council, as well as on defending its position," Peskov told reporters.

On Monday, Russian Defense Minister Sergei Shoigu said that a new daily humanitarian pause in Eastern Ghouta would start on Tuesday from 09:00 [07:00 GMT] until 14:00, following the relevant order of Russian President Vladimir Putin. Security at the exit from the humanitarian corridor is set to be provided by the Russian military police and the Syrian army.

On Saturday, the UN Security Council unanimously adopted a resolution calling on all involved parties to cease fire and adhere to a long-term humanitarian pause on the entire territory of Syria in order to guarantee the safe and unimpeded supply of humanitarian aid as well as the medical evacuation of those injured. However, resolution 2401 does not apply to the fight against groups designated as “terrorist” by the UNSC.

The Russian Defense Ministry had previously stated that despite the agreement the rebels from Jaysh al-Islam continued the shelling.

"Despite reconciliation statements made by Jaysh al-Islam, insurgents continue mortar shelling from the controlled territory targeting the city of Damascus … Four people lost their lives, more than 50 were injured, including 16 children [in a week]," the ministry’s statement read.

According to the Ministry, the illegal armed groups have also targeted the Syrian army at various sites on the line of contact, while Damascus’ positions near the settlements of Hazrama and Nashabiyah were attacked by car bombs.

© REUTERS / Bassam Khabieh
Terrorists Fire US-Made Weapons at Syrian Army in Eastern Ghouta - Reports
"Despite the UN Security Council resolution on the establishment of a 30-day ceasefire in Syria, the situation in Eastern Ghouta continues to worsen," the Russian reconciliation center's spokesman Maj. Gen. Yuri Yevtushenko said at a daily briefing on Monday.

Previously, Moscow warned that militants in the region were preparing to launch a provocative chemical attack which they plan to blame on the Syrian government, according to a report released by the Russian Reconciliation Center for Syria on Sunday:

The Russian military has noted that the terrorist groups were trying to undermine the ceasefire, attempting to provoke a backlash from the Syrian army.