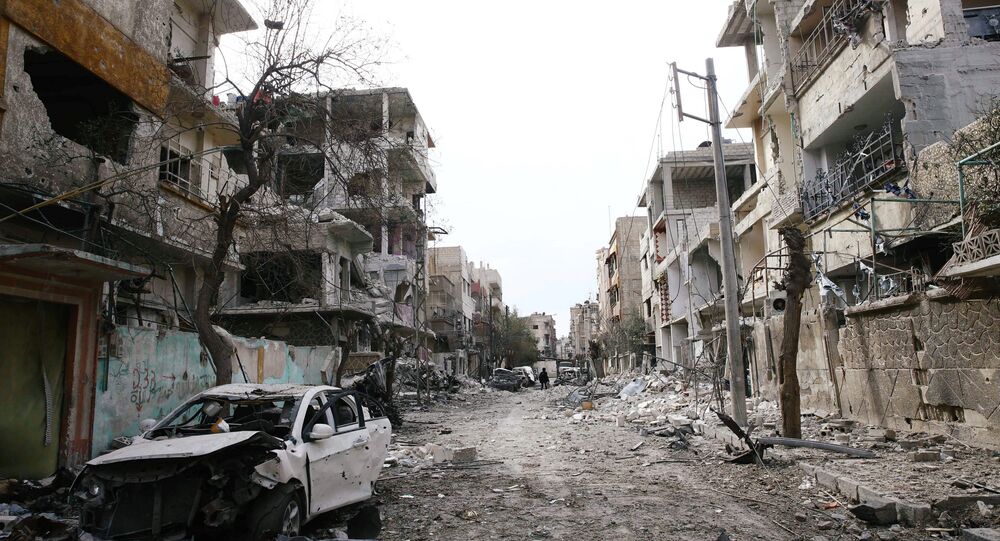 The former Al-Nusra’s missile attack on the Syrian army's positions in Eastern Ghouta, a vast area around Damascus, occurred nearly at the same time as the UN Security Council was attempting to completely implement a US-lobbied ceasefire in Eastern Ghouta , including the areas controlled by the terrorists. The latter never happened, though.

Tahrir al-Sham Hay'at, which goes by the name Levant Liberation Committee and grew out of the  Al-Nusra Front in January 2017, targeted a Bulldozer of the Syrian army Monday in Eastern Ghouta with a US-made TOW missile from the Harasta district northeast of Damascus, sources close to the terrorist groups reported, cited by Fars news outlet.

On Saturday, the United Nations Security Council unanimously approved a resolution stipulating a 30-day ceasefire across Syria to form a "humanitarian corridor" and thus facilitate aid access to civilians. Yet, the UN resolution has excluded  Daesh, Al-Nusra and other Al-Qaeda groups from the ceasefire, thus subjecting Eastern Ghouta to an even worse military confrontation.

"Eastern Ghouta cannot wait, it is high time to stop this hell on earth," UN Secretary-General Antonio Guterres told the UN Human Rights Council in Geneva, calling for implementation of the ceasefire.

Eastern Ghouta has been besieged by the rebels since 2013, with the government forces striving to drive militants out of the stronghold in an operation codenamed "Damascus Steel."

Saturday’s UN resolution appears to have changed nothing, since another 21 people were reportedly killed two days later, on Monday, including seven little children.

Russia, which backs the Syrian army in the conflict along with Iran, announced Monday a decision to establish a humanitarian corridor and implement a five-hour — from 9 a.m. to 2 p.m.- daily truce in Syria’s Eastern Ghouta to make it possible for civilians to leave the war-torn zone. Russia also warned Sunday that militants in Eastern Ghouta were preparing to launch a provocative chemical attack which they plan to blame on the Syrian government, a report released by the Russian Reconciliation Center for Syria on Sunday:

The Russian military earlier said that the terrorist groups in the region were struggling on purpose to escalate the situation in East Ghouta, preventing civilians from leaving the area and thus staging provocations against the Syrian government.