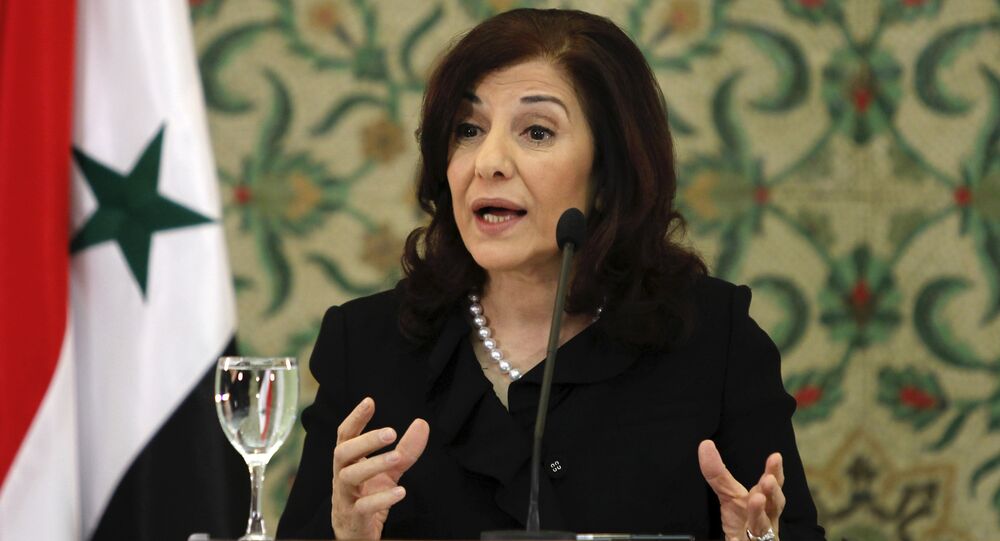 Syria should continue fighting the US, Turkish and Israeli "invaders" who attacked the country right after it got rid of terrorists, Bouthaina Shaaban, an adviser to the Syrian president, said Monday.

"We should go on fighting any foreign invaders on our land, whether it's Israeli, American or Turkish," Shaaban said at the Valdai Discussion Club's Middle East Conference.

She noted that those countries launched an attack against Damascus right after it managed to free the country of terrorists.

"When we are able to liberate most of our land from terrorism, Israel, Turkey and the United States start to attack our land," the adviser stressed.

According to Shaaban, Ankara does not implement the Astana agreements on the settlement of the Syrian crisis but uses it as an excuse "to invade the country."

"Turkey facilitated the arrival of all these mercenaries and when it felt that these terrorist mercenaries were loosing the ground, it invaded the Syrian territory in full cooperation with terrorists. Turkey invaded our land in full violation of the international law and used Astana Agreement as a cover for invading the Syrian territory on an unexpected pretext," Shaaban said at the Valdai Discussion Club's Middle East Conference.

Ankara has been carrying out "Olive Branch" operation in Syrian northern district of Afrin since January 20, saying that its offensive was aimed at clearing the Turkish border with Syria from terrorist presence. Turkey considers the Kurdish People's Protection Units (YPG) and the allied Democratic Union Party (PYD) to be linked to the Kurdistan Workers' Party (PKK), listed as a terrorist organization by Ankara.

Turkey has said that around 1,500 militants have been killed or captured as a result of the ongoing operation.

Speaking further, the Shaaban noted that Russian army had no presence in Syria, while all the Russia's support to Syria comes from the country's air force.

"There is no Russian army in Syria. There is only air force. All other reports in the western media are just propaganda," Shaaban told reporters.

Earlier in the day, Moscow began hosting a two-day conference covering a whole range of Middle Eastern issues, which is being attended by high-ranking officials, such as Russian Foreign Minister Sergey Lavrov and his Iranian counterpart Mohammad Javad Zarif.

US, Russia Discuss Steps Toward Syrian Peace After End of Fighting – State Dept.