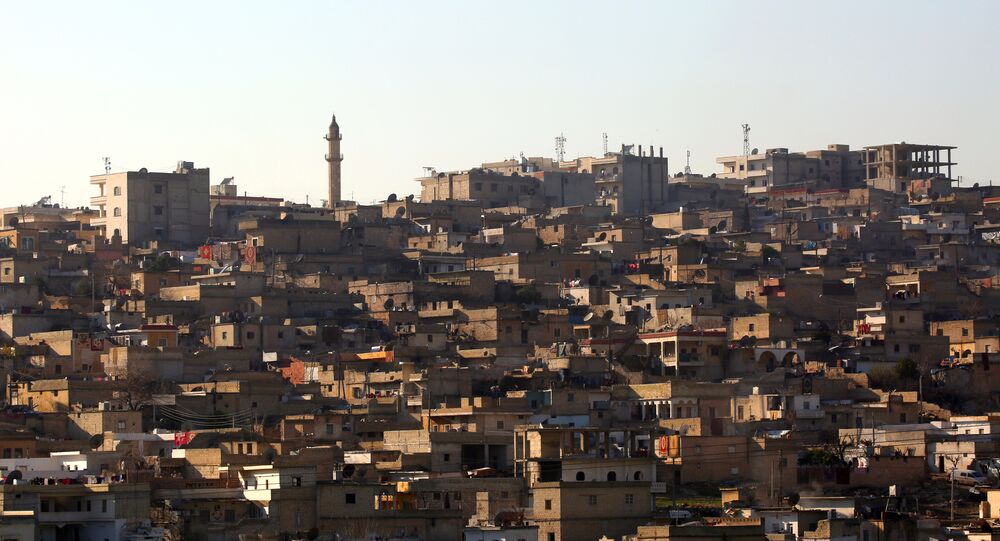 As Turkish forces continue to pound the Kurdish militias entrenched in Syria’s Afrin, the latter refute claims about making arrangements with the Syrian government in order to solve their current predicament.

Rojhat Roj, commander of the Kurdish People’s Protection Units (YPG) in Afrin debunked reports about Kurdish militias making an agreement with Damascus to have Syrian armed forces deployed in the province to protect it from Turkey.

"The information about Syrian government army preparing to enter Afrin is not true. We did not conduct negotiations with the Syrian government on this issue and did not make any agreements pertaining to this matter," Roj told Sputnik.

© AFP 2021 / Ahmad SHAFIA BILAL
Drone Captures Syrian Kurdish Militants Hit by Airstrike in Afrin (VIDEO)
Earlier Lebanese broadcaster Mayadeen reported that Damascus and the Kurdish militias have reached an accord, and that Syrian army units are about to be deployed to the beleaguered Afrin region, apparently as a deterrent against the advancing Turkish forces.

A source familiar with the situation also told Sputnik that the deployment "of the Syrian Armed Forces at the Syrian-Turkish border in Afrin" is expected to occur in the next few days.

Syrian officials condemned the operation, characterizing it as an assault on Syria's sovereignty.

While Kurdish militias do clash from time to time with the Syrian government forces in Deir ez-Zor province, YPG representative Nuri Mahmoud insisted that the Kurds have no intention of waging war against Damascus.

According to him, the YPG alliance with the US was brokered purely against Daesh, while the Kurdish forces fight “for the stability of Syria” and strive to bring about “an early resolution of the Syrian conflict within a united Syria.”

At the same time, YPG commander Sipan Hemo insisted that the Syrian army should take most of the responsibility for the defense of Afrin against what he described as a Turkish invasion, urging Damascus to “immediately send in reinforcements to the border region with Turkey.”

Turkey began its military campaign against the Kurdish militias in Afrin on January 20 this year. Codenamed Olive Branch, the goal of the operation is to strike a blow against the US-backed People's Protection Units (YPG) which Ankara regards as an affiliate of the Kurdistan Workers' Party (PKK) that was branded as a terrorist organization by Turkey.

According to a statement issued by the Turkish General Staff on Friday, the Turkish troops have neutralized 1,551 militants belonging to the Kurdish People's Protection Units (YPG), the Democratic Union Party (PYD), and Daesh (ISIL/ISIS) since the start of the campaign.

Meanwhile, Turkish President Recep Tayyip Erdogan declared that the US’ plans in Syria are aimed against "Turkey, Iran and maybe Russia", claiming that the vast amounts of military hardware and munitions being shipped by the United States into the region are not meant to be used against Daesh alone.