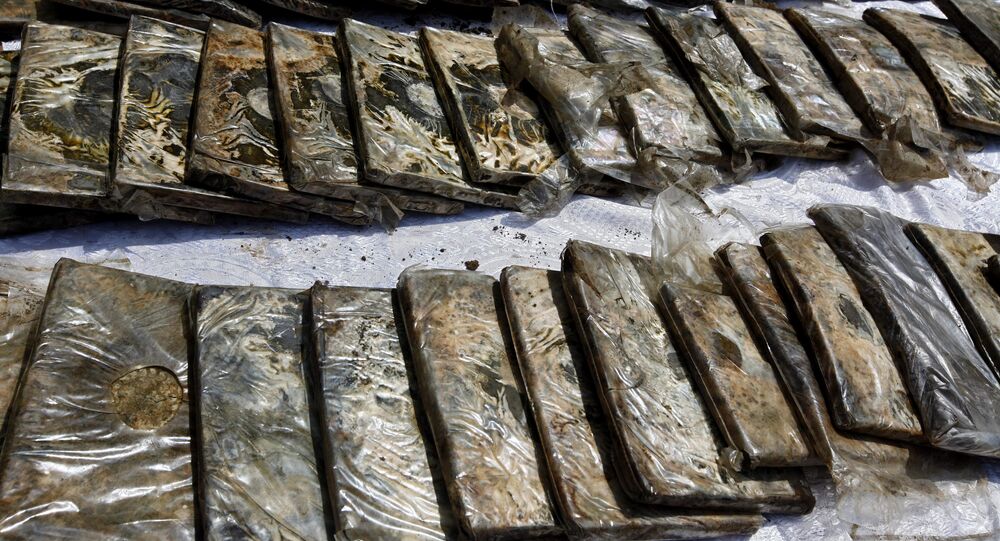 Hashish Becoming Main Source of Income for the Taliban

Cannabis resin has joined opium as an export of choice for Islamist terrorists fighting the Afghan government for control of the country, which has been ravaged by war for decades.

According to a recent report released by the NATO Special Operations Command, 34 metric tons of cannabis and 300 kilograms of processed hashish were seized in Afghanistan in a raid carried out jointly with the National Interdiction Unit of the Afghan police force. NATO said that these raids were an attempt to block the sources of income of the Taliban.

In January, commandos from the Afghan army’s 7th Special Operations in Kandak conducted a night raid on a Taliban “Red Unit” compound in Nahr-e Saraj district, Helmand province. As a result,  more than 1,000 kilograms of hashish worth $3.4 million was seized and destroyed.

© RIA Novosti .
Russian Deputy FM: Western Coalition Not Doing Much to Curb Drugs in Afghanistan
Both Afghanistan and the world community have been conducting a large-scale battle against the production of narcotics in recent years, but this battle hasn't lead to any significant results. A few years ago, the UN recognized Afghanistan as the world's largest narcotics producer.

The war, which has lasted for almost four decades in Afghanistan, has destroyed all the country's infrastructure. To survive, villagers are forced to grow poppies for opium. According to the latest UN data, about 70,000 hectares of land is used for growing cannabis. Annually, the country produces between 1,500 and 3,500 metric tons of hashish.

Sputnik spoke to General Najibullah from the Kabul special police force and Seyed Mehdi Kazemi, spokesman for the anti-drug department of the Ministry of Interior Affairs of Afghanistan, about who controls the narcotics business in the country, as well as the growth in production and smuggling of drugs in Afghanistan.

Seyed Mehdi Kazemi told Sputnik that the Taliban controls the production of drugs, as it is an essential source of their income: “The Taliban need money to maintain their military equipment and buy weapons. That's why they took control of factories that produce drugs into their own hands.”

© AP Photo / Rahmat Gul
Washington, Kabul Losing War on Drugs in Afghanistan - US State Department
While General Najibullah, talking about his experience in the fight against drug trafficking, noted an increase in production and drug smuggling: “I have worked in various crimes units for the last 20 years. Part of my duty was to fight narcotics. There are drugs in Afghanistan, and this is the reality. Special bodies were created that bravely fight against them. Of course, there is a drug mafia all over the world, as drug smuggling brings a huge illegal income. Now in Afghanistan there are drug dealers who operate in the center of the country and in the provinces. It should be noted that international drug dealers are also involved here, they encourage the cultivation of drugs by farmers, and as a result  drug smuggling in our country is growing. We cannot deny this. Yes, drug trafficking in Afghanistan has increased.”

Kazemi said that the Taliban are forcing Afghan farmers to grow drugs in areas under their control: “They force the villagers to grow cannabis and poppies and openly tell them that they will ensure their safety in exchange for growing narcotic plants. Of course, the Taliban are involved in this, and are engaged in the smuggling of drugs into Iran and Pakistan.”

According to Kazemi, the cultivation, production and smuggling of drugs is taking place in the southern and south-western provinces of Afghanistan — Oruzgan, Helmand, Qandahar; in the east — in Badakhshan, Baqlan and other areas where power is in the hands of the Taliban.