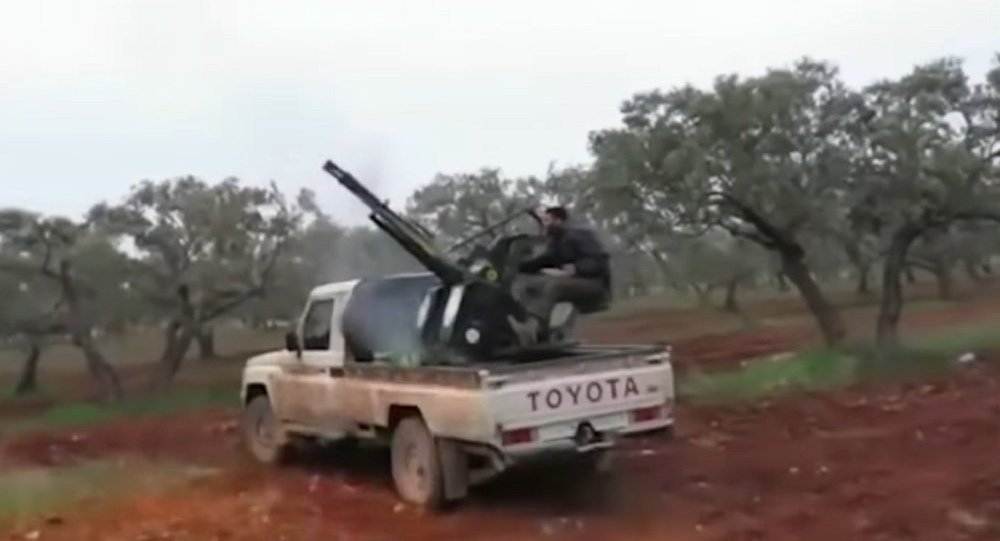 Two new videos have surfaced online, one allegedly showing jihadist militants firing on what is thought to be the Russian Su-25 strike fighter that was downed over Syria on February 3. The other shows an interview with the militant who claims to have shot the plane down. The Russian MoD has yet to comment on the authenticity of either clip.

The two clips were released by Directorate 4, a Telegram channel monitoring terrorist activities which had earlier released footage of what appeared to be the downed Russian pilot's fight with the jihadists shortly after ejecting from his doomed aircraft.

The first video shows militants firing on the Russian plane from a pickup-mounted heavy machinegun, as well as the purported moment when the Su-25 appeared to have been struck by what the Russian military has said was a shoulder-carried SAM missile. The jihadists can then be heard yelling 'Allahu Akbar' in the background.

The second video shows an interview with Mahmoud Haj Ismail, a fighter from the Jaysh Idlib Hur militant group, for Northern Syria Observer, which positions itself as a collection of independent Syrian journalists.

In the interview, the jihadist claims that his group shot down the Russian plane, and not with a MANPAD, but using their Zu-23-2 anti-aircraft twin-barreled autocannon. The militant goes on to claim that this was the fifth aircraft destroyed by the group, including one helicopter, two unspecified warplanes and an Ilyushin (an aircraft brand which has not actually suffered any losses in the Syrian campaign).

The second video can be found on Directorate 4's Telegram channel.

The Russian Ministry of Defense has yet to comment on the authenticity of either clip.

© AFP 2019 / OMAR HAJ KADOUR
Slain Russian Pilot’s Wingman: 'When MANPAD Took Out His Jet, All Bets Were Off'
Earlier, Directorate 4 released video of a group of jihadists rushing toward Major Roman Filipov, the pilot of the fated Su-25, as he fired at them before activating a grenade and blowing himself up to avoid being captured. In that video, Filipov can be heard yelling "This is for our guys!" before pulling the pin on a grenade, after which the jihadists can be seen running for cover, followed by an explosion.

On Monday, the Russian Defense Ministry confirmed that Filipov, who has been posthumously conferred the title of Hero of Russia, had blown himself up after being surrounded by terrorists.

On Wednesday, Krasnaya Zvezda, the official newspaper of the Russian Defense Ministry, provided new details on Filipov's wingman's desperate efforts to protect his commander, covering him from the ground until his own plane was close to running out of fuel.

Tahrir al-Sham, a militant group linked to the Nusra Front, the Syrian offshoot of al-Qaeda, has claimed responsibility for Saturday's shoot down. Russian air power has responded to the attack with a precision strike on the area where the MANPAD missile was thought to be launched, eliminating over 30 militants.