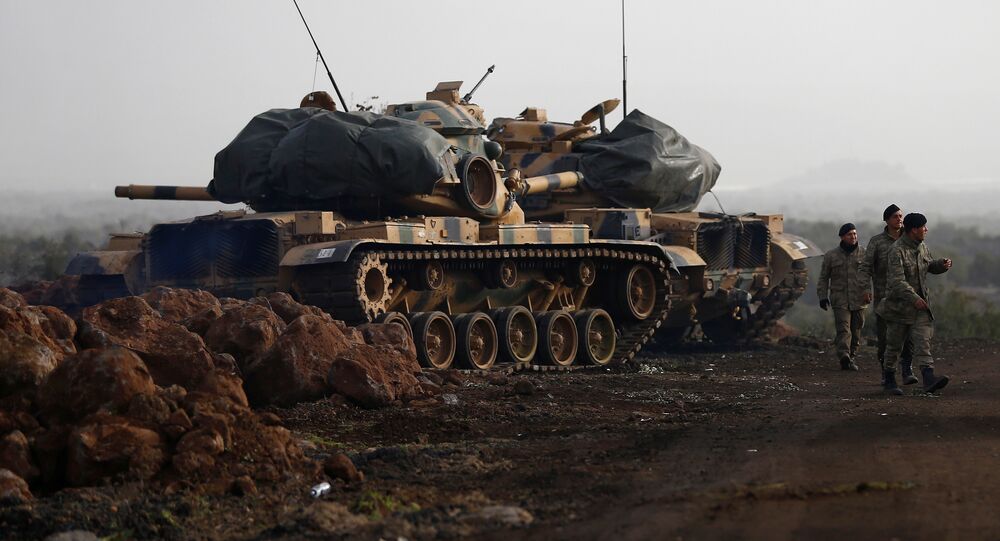 Earlier, Turkish President Recep Erdogan said that Ankara was going to "thwart games" along its borders amid the ongoing Olive Branch Operation.

According to the TV channel Al-Mayadin, the armored column entered the southern part of the Aleppo province to crush the Kurdish fighters in the Afrin area.

At the same time, the Firat news agency reports that Kurdish militants in one of Afrin's districts had repelled attacks by the Free Syrian Army, a militant group backed by Ankara. The reports said that the militants shot down three Turkish tanks and forced the forces to retreat.

It was also reported that fierce clashes are ongoing in the region.

The development comes shortly after Turkish President Erdogan said that Ankara will not limit its military actions in Syria to the Afrin operation that has entered its fifth day on Wednesday. The president warned that the country's military will "thwart games" on the Turkish borders, starting from Manbij.

Ankara announced the start of the Olive Branch Operation on Saturday amid reports that the US was going to create a security force in the north of Syria, which would largely consist of militants from the Kurdish armed organizations, such as People's Protection Units (YPG). The news has prompted the rage in Ankara, with the president promising to "nip in the bud" those forces.

© REUTERS / Khalil Ashawi
A Closer Look at Why Turkey Has a Problem With the Kurds
The People's Protection Units (YPG) were created in northern Syria in 2014 to defend Kurds in Afrin and Manbij from Daesh (ISIs) terrorists. During the fights with Daesh, the YPG managed to capture large swaths of Syrian territory that borders Turkey, to the discontent of Ankara. The Turkish leadership has deemed that YPG is linked to the Kurdistan Workers Party (PKK) that it has been fighting for decades.

The PKK was formed to start a fight for the creation of an independent state; however, they later demanded autonomy. Kurds live in parts of southeastern Turkey, Syria, Iraq, and Iran.