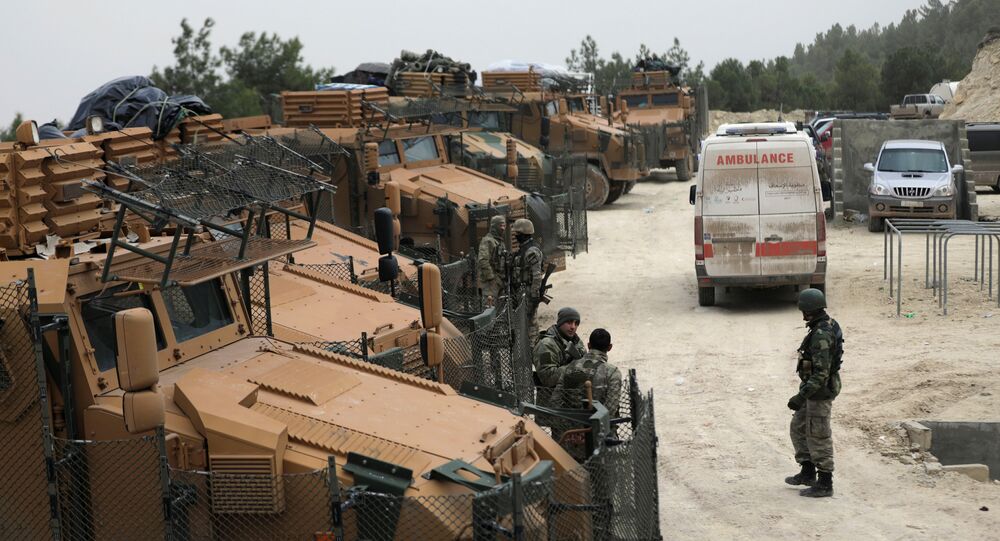 The police have detained people in 31 provinces of the country, with 11 suspects arrested, seven people released, and an investigation into 132 detainees ongoing, the Anadolu news agency reported, citing a law enforcement source.

Accounts on social media are constantly monitored by the police, and all users who spread the propaganda of terrorist groups will be held accountable, the source noted.

#middleEast Middle East Eye Turkey arrests scores for 'terror propaganda' as it presses Afrin assault Middle East Eye He suggested Turkey could widen its assault on Afrin to Manbij, a town to the east of held by the US-aligned SDF, to… https://t.co/pkkDQ3TpfH via #hng #news pic.twitter.com/2ATDwzBUAd

© AP Photo / Emrah Gurel
Erdogan: Turkey Will 'Thwart Games' Along Borders Starting From Manbij, Syria
On Saturday, the General Staff of the Turkish Armed Forces announced the launch of the Olive Branch operation against Kurdish forces in Afrin. The operation has been conducted jointly with Free Syrian Army forces. The offensive began after Ankara had repeatedly threatened to intervene in Afrin as the US announced its intent to start training a border protection force, which would include the US-backed Syrian Democratic Forces (SDF), an alliance of militias with the dominant role of the Kursdish People's Protection Units (YPG) group. Ankara has for decades deemed YPG was affiliated with Kurdistan Worker's Party (PKK), which operates in Turkey and is considered as a terrorist group there.

Damascus has firmly condemned the operation as an assault on Syria's sovereignty. Moscow, in its turn, has urged all parties to exercise restraint and called for respect for Syria's territorial integrity.

Afrin is an area controlled by the US-backed Kurdish YPG militias, which Ankara recognizes as affiliates of the PKK. The latter has been designated as a terrorist organization by Turkey as well as the United States.