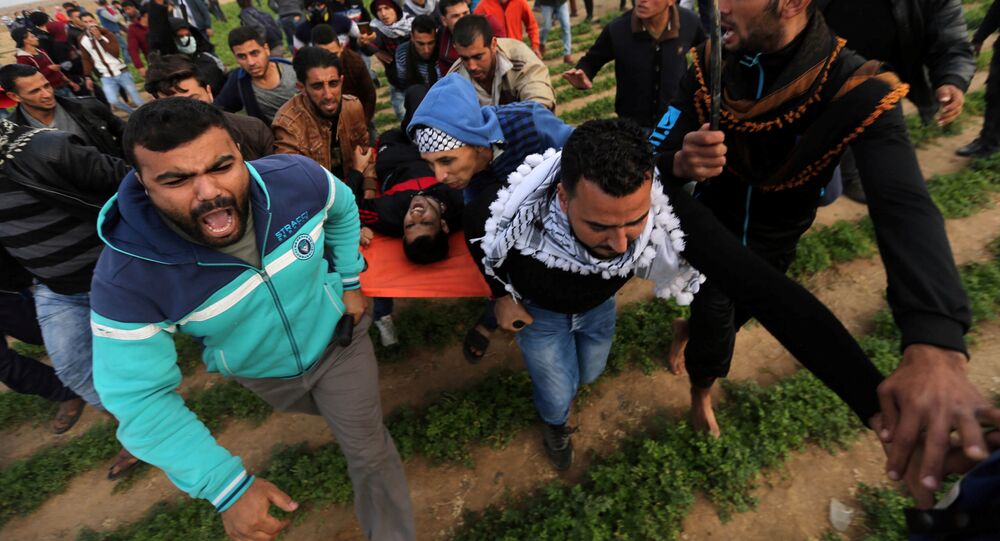 GAZA STRIP (Sputnik) – A Palestinian, who was injured during clashes with the Israeli army, has died in the hospital, Ashraf Qedra, Gaza Strip's Health Minister, told Sputnik on Saturday.

"The 22-year-old Palestinian who was injured on Friday during clashes between Palestinians and Israeli army has died," Qedra said.

According to the minister, at the hospital, there were four more Palestinians with heavy injuries.

Earlier, during the suppression of protest actions of Palestinians, a disabled person in a wheelchair was killed.

The number of Palestinians injured during clashes with the Israeli army in the Gaza Strip, the West Bank and Jerusalem, has reached 303.

READ MORE: Over 100 Palestinians Injured in Clashes With Israeli Army in Gaza — Ministry

On December 6, US President Donald Trump officially recognized Jerusalem as the capital of Israel. He instructed the State Department to begin preparations for the transfer of the US Embassy from Tel Aviv to Jerusalem. The move triggered protests across the Middle East and criticism worldwide.

The history of the conflict between Israel and Palestine has been dragging on for more than a decade. The confrontation has many reasons: geopolitical, religious, economic and ideological.

According to the UN resolution of November 29, 1947, the territory of Palestine was divided into two independent states — the Arab and the Jewish one. Separately, as planned, an international zone was established in the territory of the city of Jerusalem.

The war, known as the "six-day", began on June 5, 1967. Egypt, Syria, and Jordan moved their troops to the borders of Israel, expelled UN peacekeepers and blocked the entrance of Israeli ships to the Red Sea and the Suez Canal. Israel launched a preemptive attack; for one day, the Israeli Air Force completely destroyed Egypt's military aircraft and most of the Syrian aircraft. Having lost 679 people, Israel acquired the entire Sinai peninsula, the Golan Heights and took control of Judea and Samaria. The whole of Jerusalem belonged to Israel.