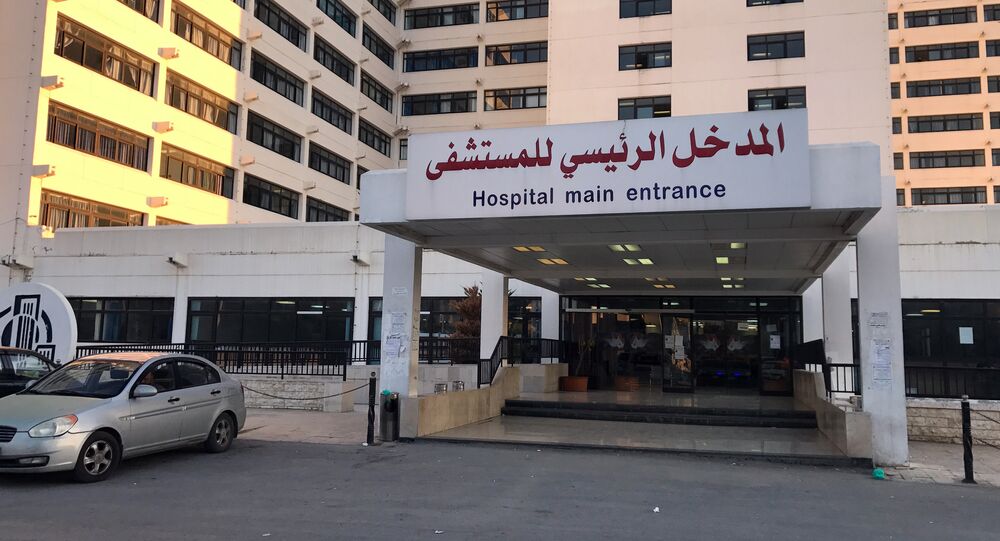 Syrian Children Suffer From Shortages of Medicine Due to Western Sanctions

Medical personnel in the largest hospital in Syria's Latakia have voiced alarm over sanctions imposed by the West that have been blocking imports of lethal drugs in the war-devastated country.

LATAKIA (Sputnik) — Maria, a young doctor who was born in the Russian city of Khabarovsk and spent her whole life in Syria, has shared with Sputnik her concerns about the treatment of babies in Syria and has explained why the mortality rate among premature babies and in the children's oncology department has increased in the last few months.

The children's ward at the largest hospital in Syria's Latakia is almost empty, with only a weak cry of a child able to be heard at the end of a corridor.

On this floor, children are hospitalized with burns and various injuries. Parents sit next to their beds, wondering if their babies will survive.

Seven years ago, the Syrian government was providing its hospitals with all the necessary medicines using the state budget. But after the war erupted and Western countries imposed sanctions on the import of medicine to the crisis-torn country, the lack of basic medicines, such as antibiotics and insulin, sometimes has resulted in tragedies.

Prior to the war, medicines were not only imported, but were also produced by local Syrian factories, which were destroyed in the course of hostilities.

"You know, it is inhumane — to impose sanctions on drugs, to solve political ambitions at the expense of people's lives. Syria cannot buy the necessary medicine today because of these sanctions, and in the first years of the war, many pharmaceutical enterprises that produced most of the necessary drugs, were destroyed, and there are shortages of the most elementary ones, what to say about medicines for children with cancer, including those who have leukemia," the doctor said.

"Following the tragic death of Doctor Liza, her work was continued by Natalia Avilova. Owing to their help, the doctors managed to save hundreds of children's lives. Every month, an ambulance delivers to the hospital up to 100 premature babies with various diseases. They need these medicines, as without them, the mortality rate reaches 90 percent," the doctor said.

Following the recent batch of aid, delivered by the fund in the summer of 2017, the lives of 250 children were saved.

The children's oncology department in the Latakia hospital today is crucial for the whole country. In peacetime, there was a large center in Aleppo and another one near Damascus. The one in the capital is now close to a territory seized by the terrorists, and the Aleppo hospital has not yet been restored to function properly.

"In all seven years of the war, a real help to our hospital came only from Russia. In oncology, because of the high cost of drugs that the state provided before, parents cannot buy the necessary medications. Therefore, the infant mortality rate is very high – 10 children per month. At the moment, 70 children are undergoing chemotherapy. Only in pediatric cardiology, over five children a month need surgery. … Children with such diseases, as a rule, die, as a surgery could not be performed here. In particular, due to the fact that there are no necessary drugs to stimulate the cardiac activity," Doctor Maria continued.

The doctor's face reflects sadness and despair, but the expression changes as soon as she approaches the next child with thinned hair and asks him with a smile which toy to bring him tomorrow.

"Children should not be deprived of childhood because of the whims of adults," Maria whispered.

The hospital’s nurse agrees with the doctor that the main obstacle the medical personnel is facing is the lack of necessary medicines, noting, however, that there are myriads of other issues that the Syrians face in the treatment of children.

"Maria is right, the problem is with the medicines, because the specialists and everything else are present. However, there is a problem with money shortages among the children’s parents. Sometimes they do not even have enough money to come here from the other province or to pay $100-$300 for tests and initial procedures. Some parents sell their land and homes for the sake of saving their child. But if there are no medicines, this money is just an empty piece of paper, you understand it. Therefore, it is impossible to say how many children die in Syria due to diseases or due to cancer in particular. Most die in their villages, without having any hope," a nurse said.

A few days later, at an informal meeting in Beirut, a representative of an international organization was briefed about the problem of the Syrian children and the shortage of medicines. The representative clarified that Syria did not receive assistance in the treatment of oncology because such medicines were very expensive and by sending essential medicine for the same amount more people could be saved.

If Western countries lifted the sanctions on the import of medicines to Syria, the country’s government, perhaps, would be able to supply medicine to treat oncology as it did before, however, while the restrictive measures remain intact, it leads to further deaths among the Syrian children.

The situation in the country has been aggravated by EU sanctions, which have been extended until June 1, 2018, called by Syrian President Bashar Assad even more dangerous than terrorism, as they have damaged the country more, despite EU foreign policy chief Federica Mogherini's claims that they didn't affect the country's civilians.

Along with the EU, the US has also imposed economic sanctions on the country over allegations that it sponsored terrorism, although Washington scaled them down after the 2011 uprising against Assad to provide support to rebel groups. However, Washington keeps restrictions in place for US investment into Syria and has frozen the Syrian government's property in the United States, taking steps to isolate Syrian businesses internationally and prevent it from selling crude oil abroad.

Current sanctions against Syria include, in particular, the oil embargo, restrictions on certain investments, the freezing of the Syrian central bank's assets inside the EU and restrictions on the supply of equipment and technologies that can be used for internal repression and for surveillance and interception of internet traffic and telephone conversations.