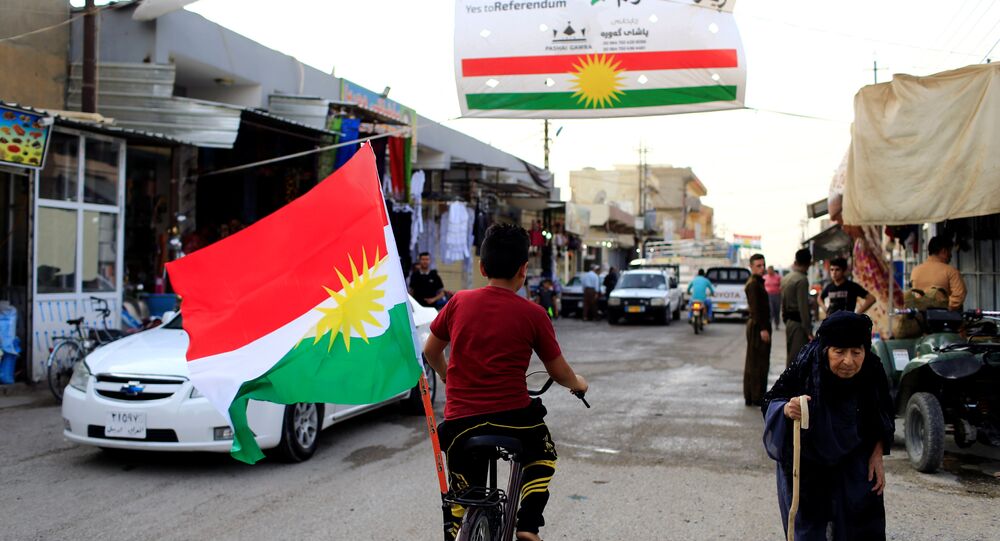 Commenting on the results of last month's independence referendum in Iraqi Kurdistan during an interview with Sputnik, Hossein Sheikholislam, an advisor to the Iranian Foreign Ministry, pointed the finger at Israel, which he claimed initiated the referendum.

He said that the idea of Iraqi Kurdistan's independence was floated by Israel, which "wants to achieve the disintegration of a number of states through their fragmentation on a national basis."

"This plan stipulates that part of the territories in the Middle East should go to maroons and druses, while other territories should be taken by Jews. One of the first steps in implementing this plan was a referendum on the independence of Iraqi Kurdistan," Hossein Sheikholislam said.

As for President of Iraqi Kurdistan Masoud Barzani, he is most likely supported by Israel, according to Sheikholislam.

"Israel is doing its best to exacerbate tensions in the region and now that the fight against Daesh is coming to a close, Tel Aviv he wants to play a national card to create new conflicts and destabilization," he pointed out.

Sheikholislam said that all of the countries in the region should unite in order to prevent this scenario.

He described Iraqi Kurdistan's independence referendum as an illegal event which is out of line with Iran's constitution and international law.

Sheikholislam reiterated that the referendum was endorsed by Israel and fully meets its geopolitical interests in the region. He also warned of far-reaching consequences for the referendum.

"This pertains to all neighboring countries and taking into account what happened, Iran, Syria, Iraq and Turkey should join their efforts to prevent ethnic separatism and attempts to split the Middle East," he concluded.

Late last week, Israeli Prime Minister Benjamin Netanyahu said that his country has no links to the referendum on Iraqi Kurdistan's independence but sympathizes with the Kurds' independence drive.

Earlier, Turkish President Recep Tayyip Erdogan claimed that Israel was the only country that supported and recognized the Kurdish referendum in Iraq, adding that the Israeli intelligence services had allegedly helped the organizers of the referendum.

According to the official results of Kurdistan's Independent High Elections and Referendum Commission, 92.7 percent of the voters cast their ballots in support of Iraqi Kurdistan's independence from Baghdad.

The vote has been harshly criticized not only by Iraq itself, but also by a number of other countries, including Iran and the United States.