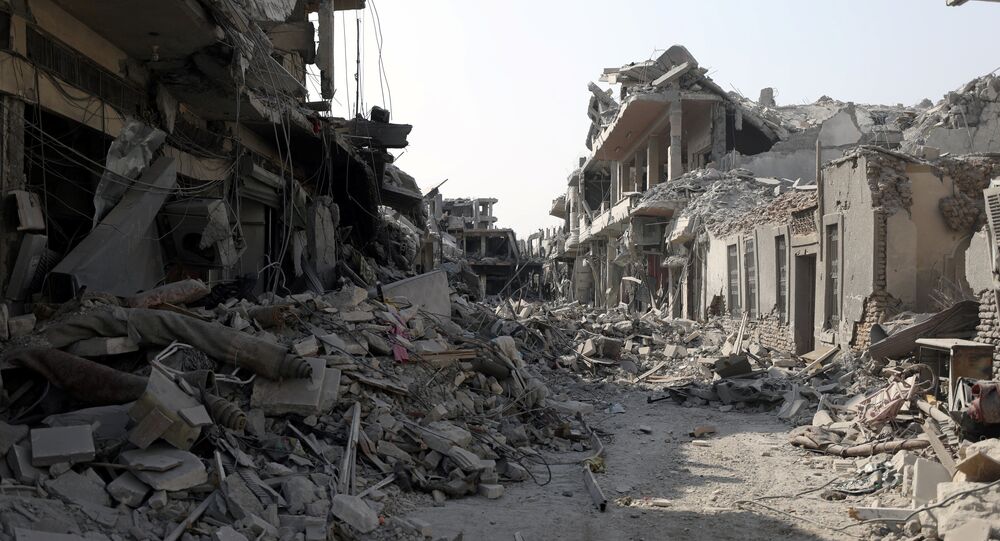 According to the Russian deputy foreign minister, numerous mistakes by US planes, as well as the lack of humanitarian aid, have led to a humanitarian catastrophe in Syria’s Raqqa.

MOSCOW (Sputnik) – Numerous “chronic” mistakes of the US planes, such as strikes against civilian objects, and the lack of humanitarian aid led to a humanitarian catastrophe in Syria’s Raqqa, Russian Deputy Foreign Minister Oleg Syromolotov has said.

“We are registering a humanitarian catastrophe in Raqqa (and in Mosul before this), caused by the lack of urgent measures to deliver humanitarian aid and to create corridors to evacuate civilians, not to mention  the multiple ‘chronic’ mistakes of the US planes, including strikes on civilian objects,” he told RIA Novosti.

The official added that the US strategy to fight Daesh had proven to be fully inefficient.

“We are pointing out to Washington the complete inefficiency of US anti-ISIL [Daesh] strategy,” he told RIA Novosti.

According to the minister, the Russian side has been deflecting and will deflect the US attempts to hamper the eradication of the terrorist hotbed in Syria.

"In this context, we will continue to emphasize extremely clear that we have harshly deflected and will continue to deflect the US attempts to hinder the quick and final elimination of the terrorist hotbed in Syria, slow down the offensive of the Syrian government troops," he told RIA Novosti.

Moreover, the Russian minister also slammed as absurd "the situation where an external force which is in Syria illegally, without the permission of the Syrian government, starts defining geographical boundaries for the actions of the Syrian army which is carrying out the operation to liberate its own country of terrorists."

"The command of the Russian group in Syria has notified its US partners in advance regarding the borders of its operation in Deir ez-Zor against the Islamic State [Daesh], Russian Deputy Foreign Minister Oleg Syromolotov has said.

“The dialogue is maintained on the level of military experts. In particular, the command of the Russian group in Syria notified via a special channel of communications its US partners regarding the borders of the anti-ISIL [Daesh] operation in Deir ez-Zor,” he told RIA Novosti.

Thus, it seems that the United States simply wants to prevent the Syrian government troops from defeating Daesh, Syromolotov added.

"It seems as if our US partners simply do not want to allow the defeat of ISIL [Daesh] by government forces acting with support of the Russian Aerospace Forces," he told RIA Novosti.

According to the Russian diplomat, the situation when the external force present on the Syrian territory without the consent of the Syrian government starts to determine the geographical scope for the actions of the Syrian army, which is carrying out an operation to liberate its own country from terrorists, is absurd.

"We openly tell our US partners: we are offering you coordination and cooperation in the fight against terrorists in Syria but you refuse. Who wins? IS," Syromolotov stressed.