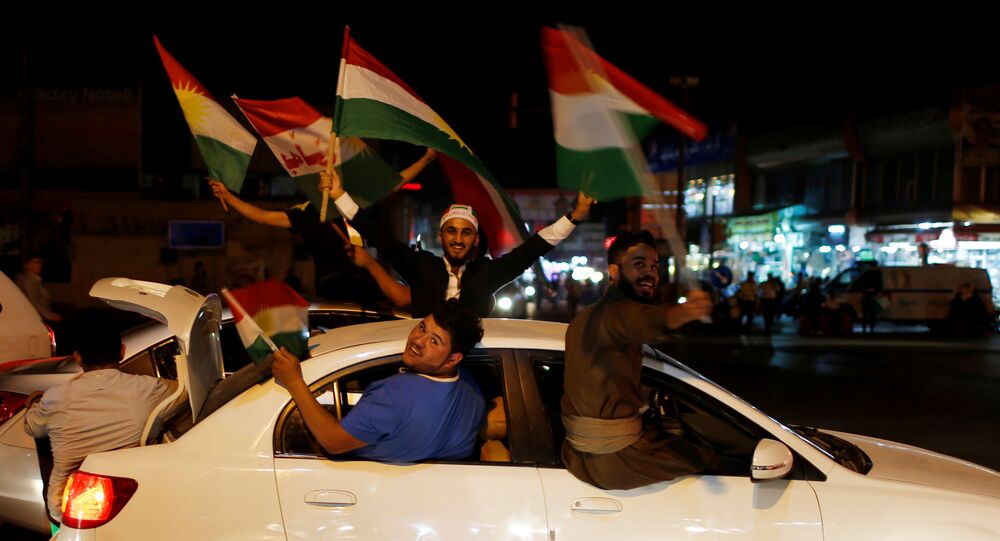 Iraqi Kurds are overwhelmed with joy at the notion that independence, which they have been struggling to obtain for over 40 years, might finally be in sight: the preliminary results of the referendum suggest that it was definitely a "yes" vote.

Member of the Politburo of the Kurdistan Democratic Party (KDP) of the Kurdish autonomy in northern Iraq, Ali Avni told Sputnik Turkiye that the Iraqi Kurds are celebrating the results of the referendum with great inspiration. Their longstanding dream has finally come true.

On Tuesday, the referendum commission announced that it counted 3.4 million ballots which showed that 91.83 percent of voters supported independence from Baghdad. The final results are expected on Thursday.

"We had to live through slaughter in Halabja and Anfal for our strife for an independent Kurdish state. We had to shed blood for our independence on the territories of four countries. Iraqi Prime Minister Al-Abadi, Daesh and other forces have been threatening us, trying to force us to abandon our dream. But we do not surrender to any threats," he told Sputnik Turkiye.

The Kurdish politician then commented on the results of the Monday vote.

"We had expected such an outcome. We have been able to fulfil our task: Kurdish people have made the right decision. The turnout was very high and many have voted for independence," he said.

© AFP 2020 / SAFIN HAMED
Independent Kurdistan: ‘We Expect Russia to Support Our Referendum’
Ali Avni, however, noted that the number of those who supported independence was considerably higher in the territories which are controlled by the KDP than in the districts which are under control of another Kurdish party, Goran, or the Movement for Change.

"The turnout and the level of support for independence were considerably higher in Dohuk, Erbil and other regions where the positions of KDP are strong. In Sulaymaniyah, for example, where Goran is stronger, the turnout was low and more than half of the residents have voted against," he said.

The politician acknowledged that there have been serious discrepancies between Goran and a number of other Iraqi Kurdish political parties over the voting. Some politicians were afraid that all of the international community would turn against Iraqi Kurdistan over the referendum. However it did take place and nothing prevented the Kurdish authorities from accomplishing their duties, he stated.

Iraqi Kurds 'Pose No Threat' to Anyone

The politician specifically stressed that Iraqi Kurds pose no threat, not to their neighbors nor to anyone else. They do their best to facilitate peace and stability around the world.

Ali Avni said that the authorities of Iraqi Kurdistan are now launching a negotiation process with Iraq. They have no intention to separate from Iraqi territory by force. Their choice is a dialogue and peaceful talks with the Iraqi leadership.

© Sputnik / Sputnik, Dmitry Vinogradov
Why Iraqi Kurdistan Has Little Chance of Becoming Independent
The establishment of the Kurdistan Region dates back to the March 1970 autonomy agreement between the Kurdish opposition and the Iraqi government after years of heavy fighting in the First Iraqi-Kurdish War (1961-1970).

However, that agreement failed to be implemented and by 1974 the Iraqi government began a new offensive against the Kurds, the Second Iraqi-Kurdish War (1974-1975), which eventually led to the quick collapse of the Kurds, who were lacking advanced and heavy weaponry.

The war ended with the exile of the Iraqi KDP party and between 7,000–20,000 deaths from both sides combined.