Will Turkish Kurds Follow Iraqi Kurdistan in Pursuit of Independence? 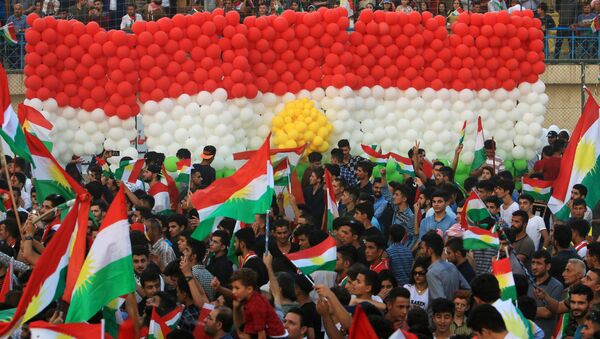 © REUTERS / Ari Jalal
Subscribe
When asked whether an upcoming independence referendum in Iraqi Kurdistan will become a precedent for Turkish Kurds, a Kurdish Regional Government spokesman told Sputnik that it largely depends on Ankara.

In an interview with Sputnik Turkey, Mustafa Shafik, adviser to Prime Minister of the Kurdish Regional Government Nechirvan Barzani, gave his thoughts on the probability of Turkish Kurds following the example of Iraqi Kurdistan, where an independence referendum is due to take place later this month.

"This issue does not depend on the decisions that Kurds will make in the course of the referendum in Iraq. It directly depends on the policy pursued by Ankara, although, of course, the results of the referendum will have an impact on the region as a whole," Shafik said.

Will the World Follow Israel in Recognizing Iraqi Kurdistan's Independence?
He referred to the complicated situation facing Kurds residing in Turkey, something that he said has persisted for forty years. According to him, clashes are under way, which indicates that "this problem requires a solution."

"Turkey does not deny the existence of the Kurdish question, but it should not be resolved with the help of weapons and brute force. I think that Turkey will adhere to a different strategy in this matter," Shafik said.

Touching upon a possible postponement of the Iraqi referendum, he said that it is "out of the question" because there is no alternative.

Noting that the independence referendum in Iraqi Kurdistan has already become a pressing international issue, Shafik regretted the fact that "the tragedy of the Kurdish people continues in Iraq."

"Kurds have been living on Iraqi territory for a hundred years now. If you look at the history, you will see nothing except bloodshed, conflagrations and destruction in the region where the Kurdish population lives," he said.

According to Shafiq, if the rights of Kurds living in Iraq, Turkey, Iran and Syria were not violated, they would not be considering independence.

As far as Iraq is concerned, "the struggle for the proclamation of [Iraqi Kurdistan's] autonomy has lasted 40 years," he added.

"As of 2003, we expect the implementation of the 140th article of the Constitution, which is specifically due to determine the status of Kirkuk. Let Turkey, Iran, Iraq and the US help resolve this issue instead of calling for a delay of the referendum," Shafik pointed out.

On Monday, Iraq's Federal Supreme Court mandated a halt to preparations for the independence referendum in Iraqi Kurdistan, slated for September 25.

Iraqi Kurdistan 'Has No Plans' to Create Kurdish States in Iran, Turkey
In June, Masoud Barzani, president of the Iraqi Kurdistan, set September 25 as the date for an independence referendum which has been widely criticized by a number of countries, including Russia, Turkey, Iran and the United States.