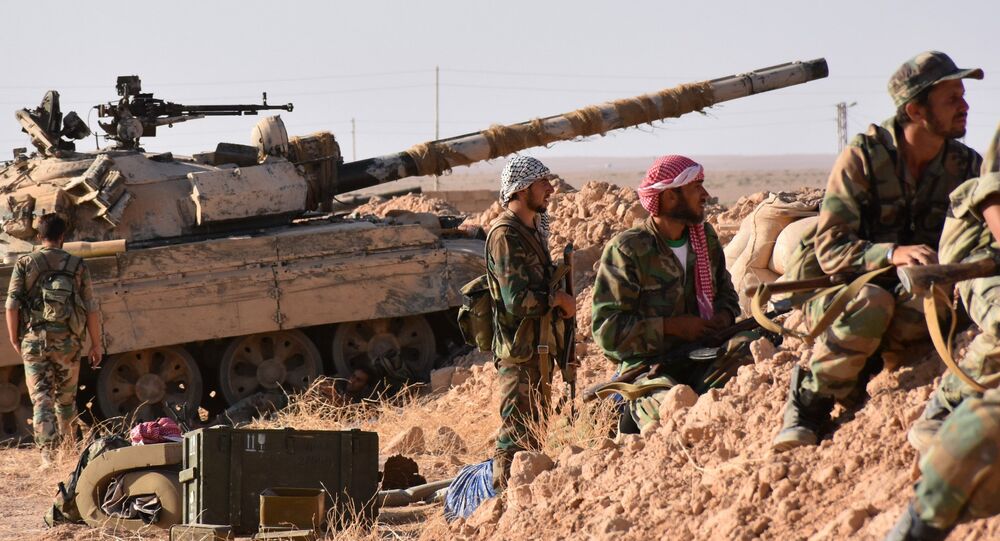 According to reports, Syria's Armed Forces and the Republican Guard began clearing the area around the airfield in the east of the Syrian city of Deir Ez-Zor from Daesh terrorists.

DEIR EZ-ZOR (Sputnik) – Servicemen with the Syrian Armed Forces' elite Tiger Forces and Republican Guard on Sunday began clearing the area around the airfield in the east of the Syrian city of Deir Ez-Zor of jihadist militants from the internationally-condemned terrorist group Daesh (ISIS), a Sputnik correspondent reported.

The troops in the vanguard are destroying fortifications and equipment, and attacking militants to the north of the airbase. At the same time, other units and allied forces have moved to the southern border of the city.

On Saturday, a vanguard unit broke the siege of the airfield, where 1,000 Syrian troops have been pinned down since January this year.

© AFP 2021 / George OURFALIAN
Syrian Army Breaks Daesh Blockade of Airbase in Deir ez-Zor
The lifting of the blockade in the west of the city helped the Syrian Armed Forces move further, as they were able to bring in supplies.

On Tuesday, the Syrian army brought an end to the three-year terrorist siege of Deir ez-Zor. According to Russian Defense Minister Sergei Shoigu, the efforts of the Syrian government forces were backed by Russian airstrikes and cruise missile strikes.

Syria has been in the grip of a civil war for over six years. Government forces are fighting against Syrian opposition groups, who strive to overthrow President Bashar Assad, as well as numerous extremist and terrorist groups, such as the Daesh and Jabhat Fatah al Sham, which are also outlawed in Russia.

Deir Ez-Zor, Syria to Be Liberated From Terrorists in Coming Days – Army General