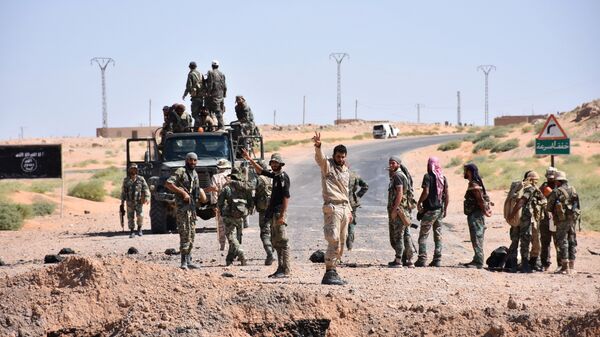 The Syrian armed forces broke the siege of an airbase in the city of Deir ez-Zor, a Sputnik correspondent reported on Saturday, saying that the clashes continue.

The elite units of the Syrian army supported by artillery and aviation recaptured a number of hills near Deir ez-Zor and reached the airbase located in the eastern part of the city.

The troops have destroyed Daesh's (a terrorist group banned in Russia) equipment and defensive constructions during the offensive, a Sputnik correspondent noted. The fights are continuing along the perimeter of the airbase.

The Syrian military started an operation to break the siege of the airbase on Friday, having captured a strategic hill in the vicinity of the facility. It was reported that the troops broke into the area near the airbase from the direction of the city's graveyard.

Deir ez-Zor, located 140 km south east of Daesh's self-proclaimed capital city of Raqqa, has been under siege for over three years. On September 5, Syrian troops unblocked the city with Russian air support.

The operation to lift the bockade had been developed since the liberation of Syria's eastern city of Aleppo in January. It ended rebel activity in western Syria, paving the way for the Damascus forces to move towards the east across the country's desert region into Daesh heartlands.