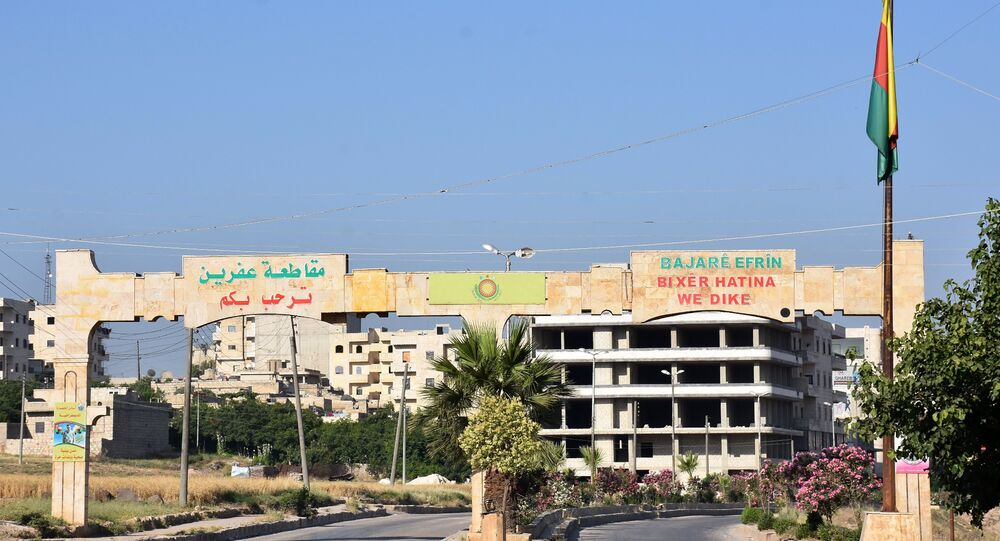 Commenting on recent media reports in the US that their troops came under fire from a group of Turkey-backed rebels while on patrol in northern Syria, Turkish military expert Soner Polat explained to Sputnik the real reason for these reports, while a commander of Turkey-backed forces said that they were actually targeting the Syrian Kurds.

On Tuesday, CNN reported that US troops exchanged fire with Turkish-backed Syrian opposition forces last week. The forces apparently " oppose the presence of Kurdish groups allied with the United States." The incident resulted in no casualties on either side.

Commenting on the report, Turkish military expert, Retired Rear Admiral of the Turkish Armed Forces Soner Polat explained to Sputnik Turkiye what the US is trying to accomplish through this.

© AFP 2021 / DELIL SOULEIMAN
Totally Wasn’t Us: Turkey Denies Role in Map Outlining Secret US Presence in Syria
"The news, which American mass media outlets such as CNN have given excessive attention, are aimed at considerably limiting Turkey's field of activity in the north of Syria," he told Sputnik.

The recent incident is purely of a private character, he said. Many media sources have not given it much attention. However American mass media, such as CNN, interpreted it in such a way that the fighters of the Turkey-backed Free Syrian Army (FSA), which participated in the Turkey's Operation Euphrates Shield, unexpectedly opened fire on the US troops.

"I think that by covering of the developments on the ground in this way, the US wants to convince the international community that 'Turkey is attacking the American servicemen' and thus indirectly exert pressure on Turkey," Soner Polat said.

He further suggested that such an attempt might be aimed at preventing Turkey's possible operation on the territory of Afrin, a district and a city in northern Syria.

"The US wants to put up a psychologic barrier to prevent Turkey's possible steps in the region. I guess there is no other military or tactical rationale behind this incident. This is part of the US strategy of a psychologic warfare," the Turkish military expert said.

© REUTERS / Rodi Said
Turkey Reproaches US Over Arming Kurdish YPG in Syria
Soner Polat however ruled out that the US would resort to any open confrontation with Turkey in the region.

"The US does not have any particular trump cards there, thus it won't resort to a confrontation with Turkey. A certain US' freedom of actions in this region is based on the lack of a unified strategy of the Eurasian bloc of countries in this area," he explained.

He further elaborated that the countries of the Eurasian bloc continue finding an agreement on the issue, which plays a key role in the developments in the north of Syria. Such players as Turkey, Iran, Russia and Syria's government are doing the utmost to reach a consensus and work out a unified strategy on the settlement of the Syrian crisis.

In a separate comment on the issue, one of the commanders of the Sultan Murad Division, fighting alongside the FSA and who exchanged fire with the US servicemen, told Sputnik Turkiye that they have been targeting not the [US-led] coalition forces, but the Kurdish-led People's Protection Units (YPG).

"We have been shooting at YPG positions in the area of Manbij in response to artillery fire of the Kurdish units on the settlement of Mare and southern territories of the city of Azaz," the commander, who preferred not to reveal his name, told Sputnik.

© AP Photo / Hammurabi's Justice News
US-Backed Rebels Sell Guns to Daesh - Former Security Head of Base in Syria
The US troops arrived at the site of the clash to defend the YPG positions, he further explained. There were no victims or casualties, he said, as the US forces remained in armed vehicles.

The US servicemen opened retaliatory fire from heavy armament on the territories under control of the Sultan Murad Division in the north of Manbij and in the area of Ayn Dedet in the south of Jarabulus.

The commander further said that there have been no air strikes and no victims and casualties among FSA fighters. The clash did not last for long.

"In order to prevent such incidents in future, FSA and Sultan Murad fighters should set up contacts with Turkish troops," he concluded.