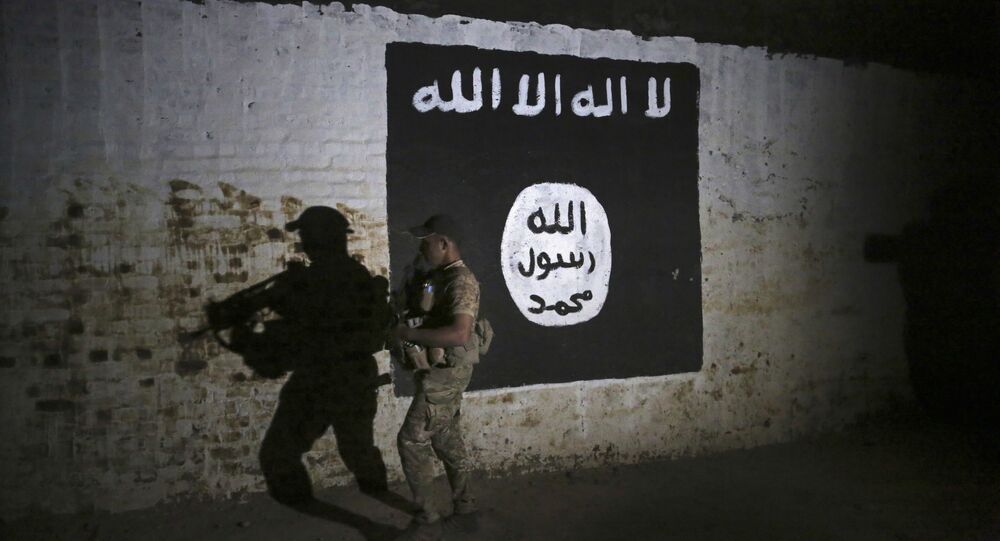 In June, 2014, the terrorist group Daesh accomplished the unthinkable when they took Mosul, a city of over a million people, hostage. Their hold over Mosul was funded by an elaborate money laundering network, a local source told Sputnik.

During its two-year hold on the Iraqi city of Mosul, the terror group struck fear into the local population and destroyed much of the city's infrastructure.

Since the Iraqi army liberated Mosul from Daesh on July 9, the army and allied militia have been working to destroy the last pockets held by the terrorists in and around the city, and to remove mines and bombs left by the Islamist militants.

© Sputnik / Said Tzarnaev
Kadyrov Posts Video on Russian Kids in Iraqi Orphanages After Mosul Liberation
The Daesh campaign of terror was enabled by a steady flow of financing from abroad. A source in Iraq who has investigated Daesh financing told Sputnik of three main ways in which the terror group received funding.

The first way was to send the money to a fake company in Baghdad, which then transferred the money to the city of Zakho in Iraqi Kurdistan, then to Erbil, to Turkey, back again to Erbil, and only then to Mosul.

"Money was also provided via the Turkish city of Gaziantep, where all money transfer agents were willing to cooperate with terrorists. The scheme works something like this: the client comes into the transfer office and says, 'I am returning money to this person,' which is a kind of password for transfers to Mosul. The employee takes the money and transfers it to the 'owner,' who then sends it to the final recipient in Daesh," the source told Sputnik.

© REUTERS / Youssef Boudlal
DAESH signs are pictured in Bad el Beid area during a battle between Iraqi forces and DAESH militants, in the city Mosul, Iraq March 18, 2017.
Finally, Daesh terrorists also send money via Erbil. The money is send on to Baghdad, then back again to Erbil, then to Gaziantep in Turkey, then to Zakho, Erbil again and finally Mosul.

The source said that all those paths of financing worked in parallel, giving the terrorist group a constant income of up to $3 million per day. On one day in particular, investigators counted $12 million in financial operations aimed at funding the terror group.

At the end of 2016 and beginning of 2017, the amount of transfers to Daesh decreased considerably, to no more than $80-100,000 per day. This is a relatively small amount in comparison to earlier financing. However, it should be noted that the money nevertheless continued to arrive regularly right until the end of Daesh's reign of terror in Mosul.

© REUTERS / Youssef Boudlal
Iraqi Aircraft Crush Daesh Strongholds in Tal Afar as Part of Offensive on Mosul
A large proportion of the money was payment for oil and other natural resources sold by the terror group. In addition, Daesh is suspected of profiting from people smuggling from the Middle East and Africa to Europe.

In 2016, it was reported that Daesh had been forced to cut the pay of Iraqi and Syrian fighters by half due to financial difficulties, as a result of falling oil prices and a loss of territory.

Some Middle Eastern states such as Saudi Arabia, Qatar and Turkey have been accused of financing the terror group, as have transnational companies. The French-Swiss cement giant LafargeHolcim paid jihadists in Syria in exchange for the security of its plant located to the north of Aleppo.

US Building Base in Near Daesh-Held Tal Afar - Iraqi Military