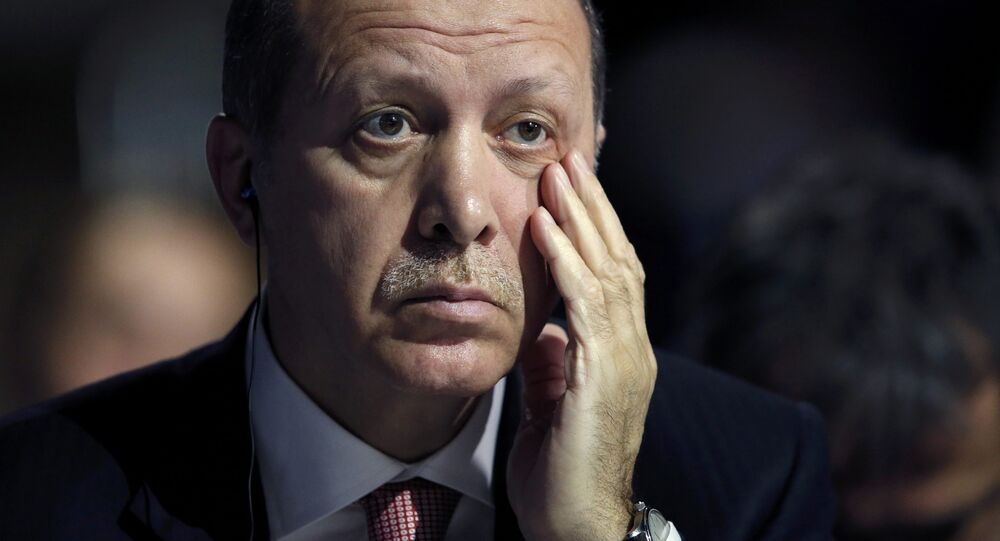 Recep Tayyip Erdogan has dramatically vowed to leave office if any proof is provided that Ankara has been buying oil from the terrorist group Daesh (ISIL/IS). But does the Turkish leader really believe that President Putin is going to make a statement unsupported by evidence? Here’s at least some of the evidence Erdogan has hastily asked for.

“I’ve shown photos taken from space and from aircraft which clearly demonstrate the scale of the illegal trade in oil and petroleum products,” Vladimir Putin told reporters in November on the sidelines of the G-20 summit in Antalya.

“Car convoys stretching for dozens of kilometers, going beyond the horizon when seen from a height of four-five thousand meters," added the Russian president.

The real thing is that President Putin actually got up in front of the world's largest economic powers and told them, right to their faces, that Russia knows exactly where the oil is going.

The Guardian’s investigation on the Daesh oil flow into Turkey:

The British newspaper has posted a number of articles on the Daesh oil business based on its own investigations.

“After a US attack on the compound of a Daesh (ISIL) leader in Syria in May, direct dealings between the terrorist organization and Turkey became undeniable,” the newspaper wrote back in July, referring to documents seized at the compound.

© AP Photo / Kevin Frayer
Turns Out, Russia Was Right: ISIL Oil is Going to Turkey – German Media
“Following the killing of Abu Sayyaf, an ISIL official responsible for oil smuggling in May, a senior Western official familiar with the intelligence gathered at Sayyaf's compound said that direct dealings between Turkish officials and ranking ISIL members were now “undeniable.”

“From mid-2013, the Tunisian fighter [Abu Sayyaf] had been responsible for smuggling oil from Syria's eastern fields, which the group had by then commandeered. Black market oil quickly became the main driver of Isis [ISIL] revenues — and Turkish buyers were its main clients,” the daily then said.

In a follow up of the President Putin’s remarks on the issue, the newspaper has published another article with the reference to a “long list of evidence of Turkish support for Daesh (ISIL) in Syria, compiled by The Institute for the Study of Human Rights at Columbia University.

© AFP 2021 / ACHILLEAS ZAVALLIS
A picture taken on November 25, 2013 shows oil rigs in the Kurdish town of Deriq (al-Malikiyah in Arabic), in the northeastern Hasakeh governorate on the border with Turkey and Iraq

Based on the evidence of a variety of international sources including The New York Times, The Washington Post, The Guardian, The Daily Mail, BBC, Sky News, as well as Turkish sources, CNN Turk, Hurriyet Daily News, Taraf, Cumhuriyet, and Radikal among others, the document confirmed that:

Zero Hedge, a financial blog that aggregates news and presents editorial opinions from original and outside sources, presented its own selection of related articles on the issue.

Their paper, entitled "ISIS Gateway To Global Crude Oil Markets," looks at tanker charter rates from the port of Ceyhan in an effort to determine if Daesh (Islamic State) crude is being shipped from Southeast Turkey.

500 Oil Trucks in Syria meant for Turkey were blown to bits by Russia and Putin is not answering Erdogan's calls 😂😂 pic.twitter.com/La7FxjZh2E

​“The tradesmen/smugglers responsible for the transportation and sale of the black gold send convoys of up to thirty trucks to the extraction sites of the commodity. They settle their trades with ISIS on site, encouraged by customer friendly discounts and deferred payment schemes.  In this way, crude leaves Islamic State-run wells promptly and travels through insurgent-held parts of Syria, Iraq and Turkey,” the paper says.

© AFP 2021 / DOD
This November 18, 2015 image from a US Department of Defense Twitter site of the Spokesman for Operation Inherent Resolve (OIR), the US military operation against ISIL, shows a leaflet warning civilians of upcoming airstrikes

“Since allied US air-raids do not target the trucks lorries out of fear of provoking a backlash from locals, the transport operations are being run efficiently, taking place most of times in broad daylight. Traders lured by high profits are active in Syria (even in government-held territories), Iraq and south-east Turkey.”

Ceyhan is a city in south-eastern Turkey, with a population of 110,000 inhabitants, of whom 105,000 live in the major metropolitan area. It is the second most developed and most populous city of Adana Province, after the capital Adana with a population of 1,700,000. It is situated on the Ceyhan River which runs through the city and it is located 43 km east of Adana. Ceyhan is the transportation hub for Middle Eastern, Central Asian and Russian oil and natural gas (Municipality of Ceyhan 2015).

The same investigation took a closer look at exactly who is facilitating the transport of the stolen crude and where it ultimately ends up.

© Sputnik / Alexey Nikolsky
Putin: Russia Has Evidence Su-24 Shot Down to Protect Daesh Oil Deliveries
“The quantities of crude oil that are being exported to the terminal in Ceyhan exceed the mark of one million barrels per day and given that ISIS has never been able to trade daily more than 45,000 barrels of oil, it becomes evident that the detection of similar quantities of smuggled crude cannot take place through stock-accounting methods.” In other words, if Daesh oil was being shipped from Ceyhan, it would essentially be invisible.

The blog then reveals how the suppliers can hide its crude shipments by, selling off the coast of Malta via ship-to-ship transfers and helping to disguise the final buyers.

​“It turns out, Bilal Erdogan (the third child of Recep Tayyip Erdogan) owns a Maltese shipping company. The BMZ Group, a company owned by President Recep Tayyip Erdogan's son Bilal alongside other family members, has purchased two tankers in the last two months at a total cost of $36 million," the blog quotes Today's Zaman as reporting back in September.

All the above only supports the argument presented by President Putin: "We have every reason to believe that the decision to shoot down our aircraft was dictated by the desire to ensure the safety of supply routes of oil to Turkey, to the ports where they are shipped in tankers."