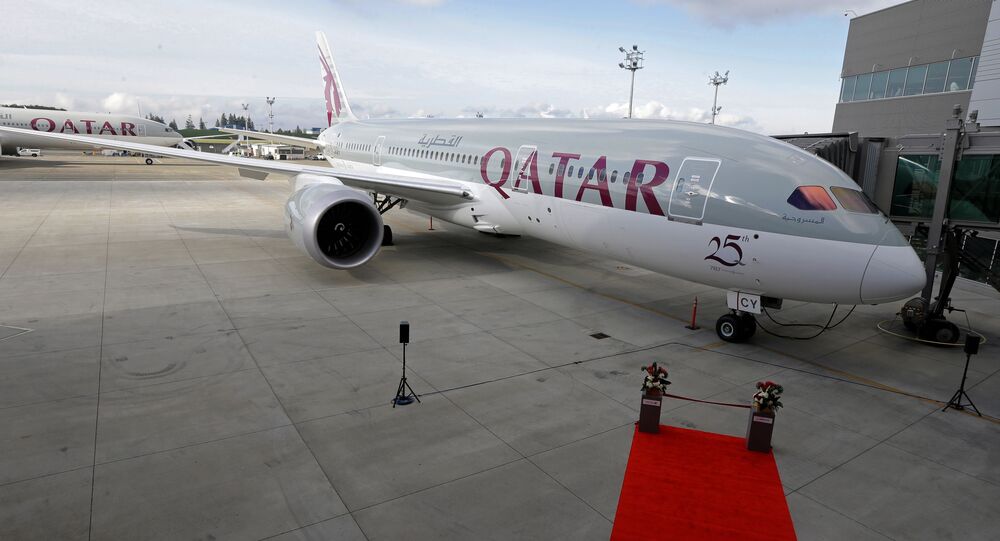 In a surprise move, Bahrain and the United Arab Emirates have agreed to allow Qatar Airways planes to fly through their airspace. Qatar, which has faced more than two months of blockade by a Saudi-led coalition of countries, called the move a "great success."

The announcement follows an August meeting behind closed doors in Canada between the three countries and the Montreal-based International Civil Aviation Organization (ICAO).

The air blockade was one of a number of measures introduced by Saudi Arabia, Bahrain, the United Arab Emirates, Egypt and Sudan amid allegations that Qatar was supporting terrorism.

© REUTERS / Mohamed Nureldin Abdallah
An image of a Qatar Airways plane is seen near an employee working at a travel agency in Khartoum, Sudan January 28, 2017

The move is understood to have been linked to the regional power struggle between Saudi Arabia and Iran, which has cordial relations with Qatar.

Before the ban on Qatar Airways flights was imposed, the majority of Qatari aircraft heading to Europe, North Africa and North America used to enter the airspace of Saudi Arabia, Egypt and Bahrain.

Got a question and need a fast answer? Now you can tweet to our dedicated 24/7 @QRSupport account. https://t.co/6lvE5cFDkM pic.twitter.com/IU9fcKS2zK

But that still meant a large detour for plans heading to and from Qatar, which is a piece of land which juts out into the Persian Gulf from the Arabian peninsula.

The air traffic restrictions mean longer flying times for the 2.4 million residents of Qatar, 90 percent of whom are foreigners.

"Some existing air route availability has been assured, and some new temporary or contingency routes have also been developed," said ICAO spokesman Anthony Philbin on Tuesday, August 8.

"The ICAO and the states involved are continuously monitoring related air route suitability and air traffic management measures, which may still be subject to further modification if necessary, by mutual agreement," said Mr. Philbin.

But it is not clear if Saudi Arabia have agreed to allow Qatar Airways planes to fly through their airspace.

"The State of Qatar’s airports and airspace remain open, and its maritime ports continue to operate at full capacity". #ICAO #UAE #KSA pic.twitter.com/R52PDy0aVu

If not, planes heading to and from Doha will have to take large detours over Jordan and Iraq or over Oman and war-torn Yemen.

"It bodes well for a longer-term solution that may provide much-needed breathing space for Qatar Airways," Mr. Ahmad said.

The restrictions on flying over the United Arab Emirates had meant Qatar Airways planes had had to fly further north, over Iran, when they were heading to Australia, India and the Far East.

Under international law, each country is entitled to decide which nation's planes it will accept in its airspace.

© AP Photo / Hussein Malla
Qatar Battles to Keep Calm and Carry On as Saudi-Led Blockade Ravages Economy
There have been several occasions in the past where countries have imposed restrictions on flights through their airspace for various reasons.

US planes are banned from using North Korean airspace, but in reality no airlines — even Chinese airlines — risk flying over North Korea, preferring to fly over Russia or South Korea instead.

In 2014, the US Federal Aviation Administration (FAA) temporarily banned flights to Tel Aviv's Ben Gurion airport because of fears that planes would be hit by incoming rockets during the war with Hamas in Gaza.

But sometimes the air is the only way around a land blockade.

Between 1948 and 1949 the Soviet Union cut road and rail links through eastern Germany after the US, Britain and France merged their zones of control to create the Federal Republic of Germany, or West Germany as it became known.

US and British planes flew supplies into West Berlin's Templehof airport for the next 318 days until the Soviet leader, Stalin, relented.

The German Democratic Republic, or East Germany, was set up soon afterwards.