Khaled Alkhateb, a stringer working for the RT Arabic broadcaster, who was killed in an anti-tank missile attack carried out by militants from the Daesh terrorist group (banned in Russia), is a hero who lost his life for "a righteous cause," Syrian Ambassador in Moscow Riad Haddad said on Tuesday.

MOSCOW (Sputnik) — On July 30, RT reported about the death of Khaled Alkhateb, a journalist working for RT Arabic, near As Sukhnah town in Homs.

"Today at this sad event we are talking about… a journalist, who worked in many hot spots [around the world], helped the children of his native city, a journalist who lost his life for the righteous cause. This is our lost hero Khaled Alkhateb," Haddad said during a memorial ceremony, as quoted by RT.

The ambassador stressed that there was no difference between those who shelled the RT film crew and those who introduced sanctions against the broadcaster and Sputnik news agency.

"In the case of the death of our friend Khaled Alkhateb, these [people] are the henchmen of the IS [Daesh]. And in the case of attempts to impose a blockade and sanctions against RT and Sputnik — they are the sponsors of the IS and other [terrorist] groups," Haddad noted.

Earlier in the day, RT Editor-in-Chief Margarita Simonyan said RT would establish an annual international award for reporters to honor the memory of Alkhateb. 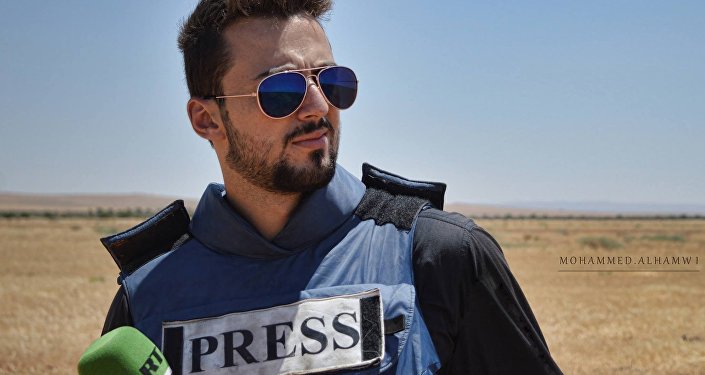 © Photo : Mohammed AL.Hamwi / facebook
Mother of RT Stringer Killed in Syria: 'His Dreams Were Wiser Than His Age'
According to Alkhateb's social media accounts, he was born in 1992 and began working for the RT Arabic in June this year. He worked at the Arabic website of the Sputnik news agency for two years, then switched to the Syrian state television channel Al-Ekhbariya before taking the job with RT.

In November 2016, the European Parliament voted in favor of a resolution on countering alleged Russian anti-EU propaganda and media, including Sputnik and RT. Commenting on the adoption of the resolution, Russian President Vladimir Putin stressed that it indicated an apparent degradation of the concept of democracy in Western societies.