Mother of RT Stringer Killed in Syria: 'His Dreams Were Wiser Than His Age' 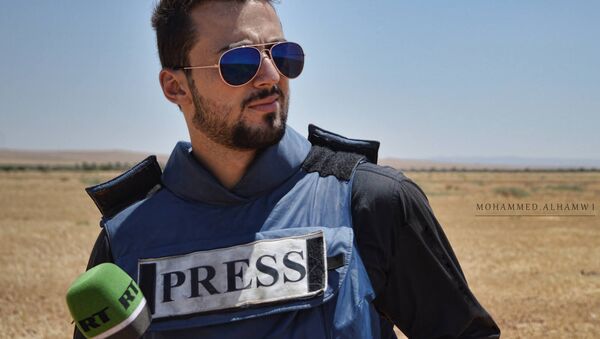 MOSCOW (Sputnik) — Earlier in the day, Khaled Alkhateb, a journalist working with the RT Arabic, was killed in shelling carried out by the Daesh (outlawed in Russia) terrorist group in Syria's western province of Homs. Cameraman Muutaz Yaqoub, who was working with Alkhateb, was injured in the shelling and was sent to a hospital in Homs with minor injuries.

"Khaled loved life and helped the residents of the area [where he lived], helped orphans — the children of those killed in the area of Salamiyah [the stringer's native city]… I was very worried every time he was on air and prayed for him, but this time, the fate was stronger than all my prayers… The thoughts that appeared in his head were unique, his dreams were wiser than his age, that is why it was his fate," the mother of the deceased told in a telephone conversation with Sputnik.

Syrian Soldier Killed Along With RT Stringer in Homs - Broadcaster
Im-Khaled noted that her son had always sought to obtain what other journalists could not get. He had been working for two years on the Arabic site of the Sputnik agency, then switched to the Syrian state television channel Al-Ekhbariya, and then he took the job for RT.

"The ones who know Khaled are aware of his passion for his work. He prepared reports quickly. He had big dreams and he loved his motherland and, despite his young age, was able to combine his work with studies," Im-Khaled, the mother of two sons, added.

Earlier in the day, Dmitry Kiselev, the director general of the Rossiya Segodnya International Information Agency, and Margarita Simonyan, Sputnik and RT editor-in-chief, expressed their condolences to relatives, friends and colleagues of the killed journalist.