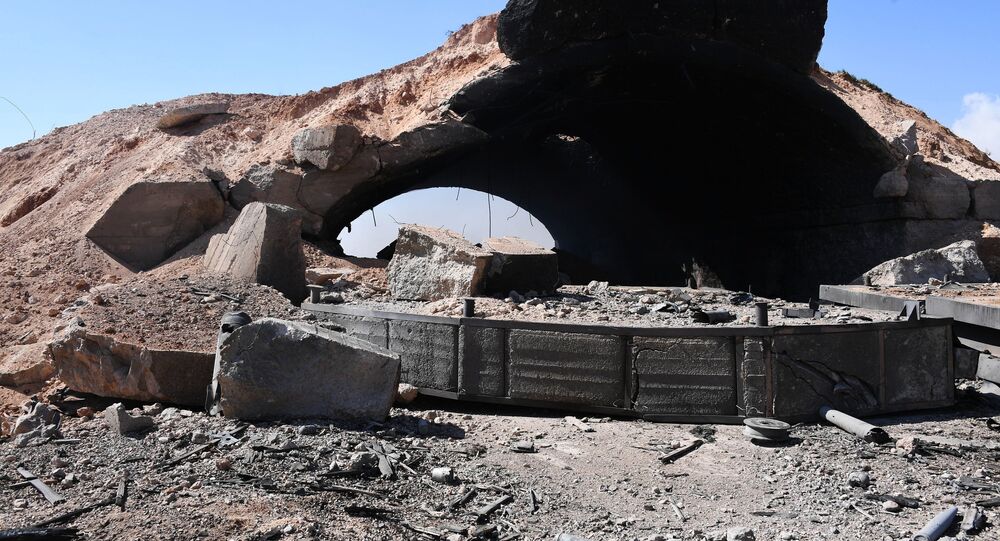 The US attacks on the Syrian army are doing "nothing more than aiding terrorism." Thus the US is helping Daesh, the al-Nusra Front and other terrorist groups. It is an established fact that if the US takes such action, another attack will follow, political commentator and former adviser to the Iranian Foreign Minister Sabbah Zanganeh told Sputnik.

© AP Photo / Ford Williams/U.S. Navy
Why US Should Be 'Brought to Trial' For Missile Attacks on Syrian Army
The US missile attacks on the Syrian army support the terrorists; this is what political commentator and former adviser to the Iranian Foreign Minister Sabbah Zanganeh told Sputnik Persian.

"It is known that any unilateral actions that lack the approval of the UN Security Council are regarded as crimes and are strongly condemned," he said.

"Such unilateral actions are nothing more than aiding terrorism. By conducting these attacks, the US is helping Daesh, the al-Nusra Front and other terrorist groups. It is an established fact that after such actions by the US, more terrorist attacks will follow,” he said.

The political analyst further explained that during a similar situation, the terrorists were able to recapture the city of Palmyra.

"The persons responsible for the air base attack must be brought to trial and those countries that are able to pave the way for the suspension of such arbitrariness on the part of the US should take all possible measures to prevent such actions by the Americans in Syria," he told Sputnik.

In a separate comment on the US missile attack, Major General of the Syrian army Muhammed Abbas told Sputnik that all the US attacks in Syria come in accordance with the program worked out by the US strategic and research centers. The purpose of this program is to maximally expand and firm up US hegemony in the world.

© Wikipedia
Assad: 'Premeditated' US Airstrike on Syrian Army in Deir Ez-Zor Supports Daesh
"According to this program, the 21st century should become explicitly an age of US domination. And all US operations are directed at achieving this purpose," he told Sputnik.

The US only "gives the impression" of the attacks, which, in reality, do not affect the terrorists, whom the US continues to supply with heavy weapons, he said.

Earlier on Friday, an informed source told Sputnik that Daesh (ISIS) terrorist fighters had attacked the Syrian armed forces at the same time and in the same vicinity as the US missile strike on its airfield near Homs.

The source said the terrorists launched an attack on a stretch of the Homs-Sha'irat highway and held their territory for over an hour until the arrival of reinforcements. He wondered whether it was a coincidence that the IS [Daesh] fighters attacked one of the defensive positions along the Homs-Palmyra route at the same time the US attacked the Sha'irat airbase.

The US launched 59 Tomahawk cruise missiles at the Syrian military airfield in Ash Sha'irat near Homs late Thursday. US President Donald Trump said the attack was a response to the alleged chemical weapon use in Idlib Province on Tuesday, which Washington blames on Damascus.

Back in November, Syrian President Bashar Assad accused Washington of conducting a "premeditated attack", which supported Daesh, on September 17, when the US-led coalition's aircraft bombed government troops in the city of Deir ez-Zor, killing over 80 people.

© AFP 2021 / Ford Williams/U.S. Navy
Сoincidence? Daesh Militants Attacked Syrian Army Positions Simultaneously With US Strike
"It was premeditated attack by the American forces, because ISIS [Daesh] was shrinking because of the Syrian and Russian and Iranian cooperation against ISIS [Daesh], and because al-Nusra, which is an al-Qaeda-affiliated group, had been defeated in many areas in Syria, so the Americans wanted to undermine the position of the Syrian Army; they attacked our army in Deir ez-Zor," Bashar Assad told the Serbian newspaper Politika at the time.

US warplanes hit Syrian government troops near the eastern city of Deir ez-Zor on September 17. The Pentagon said initially that the airstrike was a mistake and the intended target was Daesh militants, while a number of Syrian officials stated that the attack was intentional.