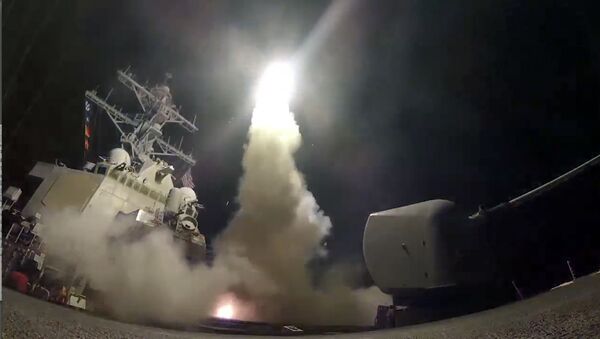 © AP Photo / Ford Williams/U.S. Navy
Subscribe
Sabbah Zanganeh, a political commentator and an ex-adviser to the Iranian Foreign Minister spoke to Sputnik Persian in an interview about the missile attack by the US on the Syrian Arab Army.

Iran Calls for Setting Commission to Investigate Alleged Syria Chemical Attack
“If the US president's statements boil down to the point that air attacks were conducted from Ash Sha’irat air base to use the chemical substances on the city of Khan Shaykhun, it means that this should be confirmed by an ad hoc group of independent experts. However, this did not happen!” Zanganeh said.

He further said that if the US is so confident in their accusations, they could call for an early investigation so that what they were saying can be confirmed.

“However, they took unauthorized unilateral measures without any consultations and permissive sanctions against all possible international rules and norms,” the ex-adviser said.

Zanganeh further said that it is known that any unilateral actions without the approval of the UN Security Council are regarded as crimes and are strongly condemned.

“Such unilateral actions are nothing more than aiding terrorism. By conducting these attacks, the US is helping Daesh, al-Nusra Front and other terrorist groups. It is an established fact that after such actions by the US, another terrorist attack will follow,” he said.

He added that the terrorists were able to capture the city of Palmyra once again.

In his opinion the persons responsible for the air base attack must be brought to trial and those countries that are able to pave the way for the suspension of such arbitrariness on the part of the US should take all possible measures to prevent such actions by the Americans in Syria.

Russian Foreign Minister Accuses US of Not Providing Proof of Idlib Attack
Earlier this week, the Pentagon carried out a massive airstrike involving 59 Tomahawk cruise missiles targeting the Ash Sha’irat airbase, operated by the Syrian Arab Army (SAA). The operation was carried out as a response to President Bashar al-Assad using chemical weapons against civilians on the outskirts of Khan Shaykhun, a town in the rebel-held province of Idlib.

However, US officials have not provided any evidence proving that Damascus was complicit. For its part, the Syrian leadership and the SAA command denied using chemical weapons against civilians, as they were destroyed in mid-2014, as confirmed by international organizations.

Moscow and Damascus condemned the attack as an “aggression against a sovereign state” and as a unilateral move which had not been authorized by the UN Security Council.

Is it because I am black?
8 April 2017, 20:43 GMT6
000000
Syria is not at war with the USA. The killing of seven Syrians by the Americans is definitely a crime. Donald Trump, who ordered the attack, is the criminal. He must be tried.
Tolerance
8 April 2017, 21:46 GMT6
000000
Newsfeed
0
New firstOld first
loader
LIVE
Заголовок открываемого материала
Access to the chat has been blocked for violating the rules . You will be able to participate again through:∞. If you do not agree with the blocking, please use the feedback form
The discussion is closed. You can participate in the discussion within 24 hours after the publication of the article.
To participate in the discussion
log in or register
loader
Chats
Заголовок открываемого материала
Worldwide
InternationalEnglishEnglishMundoEspañolSpanish
Europe
DeutschlandDeutschGermanFranceFrançaisFrenchΕλλάδαΕλληνικάGreekItaliaItalianoItalianČeská republikaČeštinaCzechPolskaPolskiPolishСрбиjаСрпскиSerbianLatvijaLatviešuLatvianLietuvaLietuviųLithuanianMoldovaMoldoveneascăMoldavianБеларусьБеларускiBelarusian
Transcaucasia
ԱրմենիաՀայերենArmenianАҧсныАҧсышәалаAbkhazХуссар ИрыстонИронауОssetianსაქართველოქართულიGeorgianAzərbaycanАzərbaycancaAzerbaijani
Middle East
Sputnik عربيArabicArabicTürkiyeTürkçeTurkishSputnik ایرانPersianPersianSputnik افغانستانDariDari
Central Asia
ҚазақстанҚазақ тіліKazakhКыргызстанКыргызчаKyrgyzOʻzbekistonЎзбекчаUzbekТоҷикистонТоҷикӣTajik
East & Southeast Asia
Việt NamTiếng ViệtVietnamese日本日本語Japanese俄罗斯卫星通讯社中文（简体）Chinese (simplified)俄罗斯卫星通讯社中文（繁体）Chinese (traditional)
South America
BrasilPortuguêsPortuguese
NewsfeedBreaking
00:25 GMTNo New Date Set for Resumption of Pretrial Hearings of 9/11 Case in Gitmo, Spokesperson Says
00:06 GMTUS Closes Del Rio Port of Entry on Texas-Mexico Border Due to Influx of Migrants
00:03 GMTNew Research Sheds Light on How to Tackle Obesity
YesterdayWhite House Confirms in Touch With France Over Envoy's Recall, Will Work to Resolve Issues
YesterdayTop Senate Defense Panel Republican Says Biden Ultimately Liable for Kabul Drone Strike
YesterdayGantz: Israel Could Accept Return to JCPOA if US Has ‘Plan B’ for Iran’s Nuclear Program
YesterdayUS Judge Denies Giuliani’s Request to Return, Destroy Seized Evidence, Reports Say
YesterdayFrench Court Finds Man Guilty of Cartoons Portraying Macron as Hitler Over COVID-19 Policies
YesterdayAustralia's Great Emu War: How a Nation Declared War on a Bird and Lost
YesterdayBlinken Vows to ‘Keep Normalization Marching Forward’ on One-Year Anniversary of Abraham Accords
YesterdayEx-Algerian President Abdelaziz Bouteflika Reportedly Dies Aged 84
YesterdayAct of Sabotage Results in Power Outage in Damascus, Energy Minister Says
YesterdayOld Friends Are Not the Best?
YesterdayMilley Assured Pelosi That US Military, Not Trump, Controlled the Nukes, Vice Chairman Says
YesterdayFed. Chief Powell Orders Sweeping Ethics Review Amid Trading Scandal at Federal Reserve
YesterdayBiden to Convene COVID-19 Summit on Margins of UN General Assembly
YesterdayFootball Legend Pele 'Rushed Back' Into Intensive Care Days After Colon Cancer Surgery
YesterdayRussia Possesses ‘Unbelievable Military Power’ After Transforming Forces, US General Says
Yesterday‘Irony of Historical Proportions’: Iran Ex-FM Zarif Muses on US Deal to Sell Australia Nuclear Subs
YesterdayPrince Andrew Has a Week to Challenge Court Ruling to Serve Papers Amid Procedure Disagreements