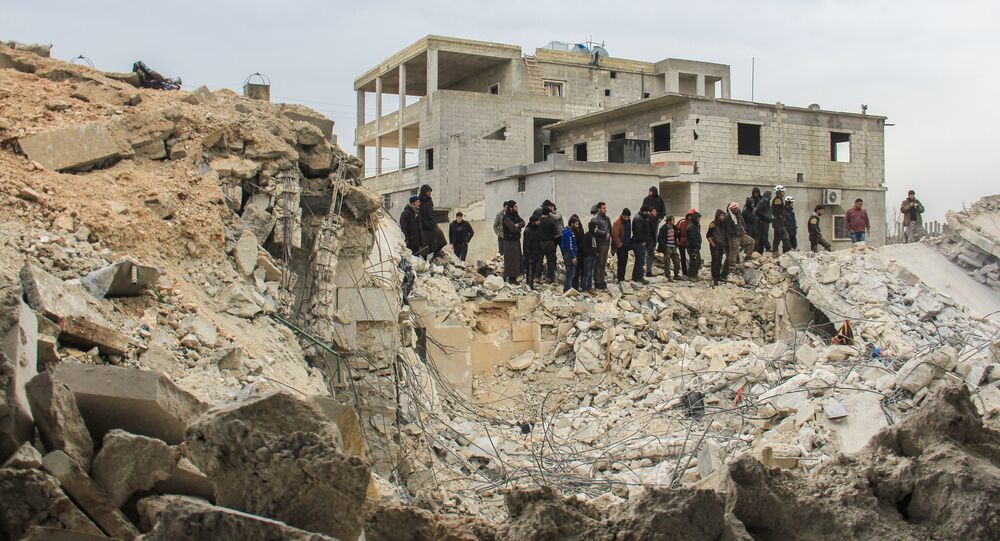 The Russian Foreign Ministry spokeswoman said during her weekly press briefing that the US and other countries submitted a draft resolution on Syria which is "completely" based on fake reports.

© Sputnik / Mikhail Voskresenskiy
Kremlin on Chemical Attack in Idlib: Russia Will Continue Supporting Assad in Anti-Terror Fight
Syrian opposition claimed Tuesday forces loyal to President Bashar Assad had used a chemical gas on people in the northwestern province, killing nearly 80 and injuring 200. Assad argued his government has no chemical weapons after agreeing to have them destroyed in 2013. He also ruled out having used chemicals against own people.

"On April 4, the Syrian Air Force aircraft carried out airstrikes on the extremists' positions on the eastern outskirts of Khan Shaykhun as part of the liquidation of consequences of the recent breakthrough of terrorists in the Hama province. Military equipment and ammunition depots were targets [of the airstrikes]. Workshops producing landmines filled with poisonous substances were located on the territory of the facility," Maria Zakharova said.

According to her, "reports about alleged use of chemical weapons by the Syrian government against own people immediately appeared in the Internet and biased media sources."

"These facts together with soil samples were recorded and handed over to the Organization for the Prohibition of Chemical Weapons (OPCW). Unfortunately, without taking any action, guided solely by fake information, the United States, France and the United Kingdom once again… submitted a draft resolution to the UN Security Council that is of obvious anti-Syrian nature and is capable of igniting an already difficult internal political situation in Syria and the region as a whole."

Russian Foreign Ministry spokeswoman Maria Zakharova said that White Helmets and the Syrian Observatory for Human Rights (SOHR) cannot be considered to be reliable sources as they have been repeatedly caught spreading fake reports on the situation in the war-torn country.

"Currently, the main goal is to objectively figure out what happened. So far, I want to emphasize that falsified reports on this issue come only from the notorious White Helmets and the Syrian Observatory for Human Rights that has already become infamous. Neither the White Helmets, nor the SOHR can be trusted. They have repeatedly undermined trust by [making] fake footages and [reporting] information later denied by all parties."

© AFP 2021 / Msallam ABDALBASET
Syrian President Assad Accuses White Helmets NGO of Being Part of Al-Qaeda
Zakharova said that same images as were used to illustrate situation in Aleppo are now used to allegedly prove the chemical attack in Idlib.

The ministry spokeswoman said that the reports by the White Helmets and the SOHR are conflicting as the White Helmets constantly changes its version of what happened. "First they speak about bombings from a helicopter or a warplane. Then they tell about the use of chlorine, then about sarin, change data about the number of victims. According to photos and videos spread on social media, representatives of the White Helmets are providing the victims with help while they [the NGO] have no reliable means of protection and act extremely unprofessionally."

Video footages from Khan Shaykhun seem to be staged, she said, adding that this fact points at the "provocative character" of the reports.

She added that the Idlib province has been controlled by terrorists since 2014.

Russia categorically rejects the draft resolution on chemical weapons in Syria, Maria Zakharova said. She added that the West-proposed resolution is of "anti-Syrian nature" and risks making negotiations process impossible.

"I wanted to note that the presented text [of the resolution] is categorically unacceptable. Its main problem — and its a fundamental one — is that it anticipates the results of the probe and immediately finds those to be blamed."

© Flickr / The U.S. Army
US Invasion of Iraq: Operation Iraqi Freedom in Details
Moscow believes that the US, France and UK-proposed resolution on the alleged chemical attack in Idlib is a fake reminding a test-tube presented by Colin Powell in 2003, Zakharova said.

"The document is completely falsified, completely based on fake information. Colin Powell number two. Later, you will be ashamed  for the actions of your authorities in the UN Security Council, stop your representatives, I am speaking to the Western audience," Zakharova said at the briefing.

The Foreign Ministry spokeswoman said that Moscow calls for a full-fledged investigation into the alleged use of chemical weapons in Idlib.

She added that resolutions which had been approved earlier are enough to conduct a thorough investigation into the incident. If some of the UNSC members believe that a new resolution is neededm it should look differently; and we have proposals."