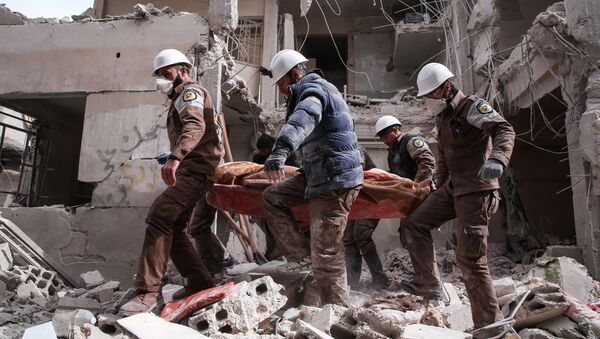 Oscar for White Helmets: Hollywood Gave Credibility to 'Terror-Affiliated' Group
DAMASCUS (Sputnik) — Assad noted that the same members of the organization, who were considered to serve for humanitarian purposes, were engaged in killings.

"White Helmets are al-Qaeda, they're al-Qaeda members and that's proven on the net," Assad said.

"The same members are killing or executing or celebrating over dead bodies, at the same time they are humanitarian heroes, and now they have an Oscar as you know," Assad said.

Top 3 Most Notorious MSM Fake News Tactics From the Syrian War
White Helmets' activities in Syria have repeatedly been questioned. However, mainstream media and even Hollywood praised the organization, which suspiciously worked only in areas controlled by al-Nusra Front terrorist group, which used to be affiliated with al-Qaeda.

One of the most controversial decisions at this year's Oscar ceremony was the fact that The White Helmets, a movie produced by digital giant Netflix, won Best Documentary Short. For the company, it was their first-ever Oscar at the prestigious ceremony.

The Russian Defense Ministry has repeatedly raised the issue of White Helmets' controversial activity in Syria.

However, a number of videos emerged in the Internet revealing that the rescue operations were staged with the "victims" wearing make-up and given instructions what to say. The rescue workers were allegedly seen on some videos with arms and in military uniform.