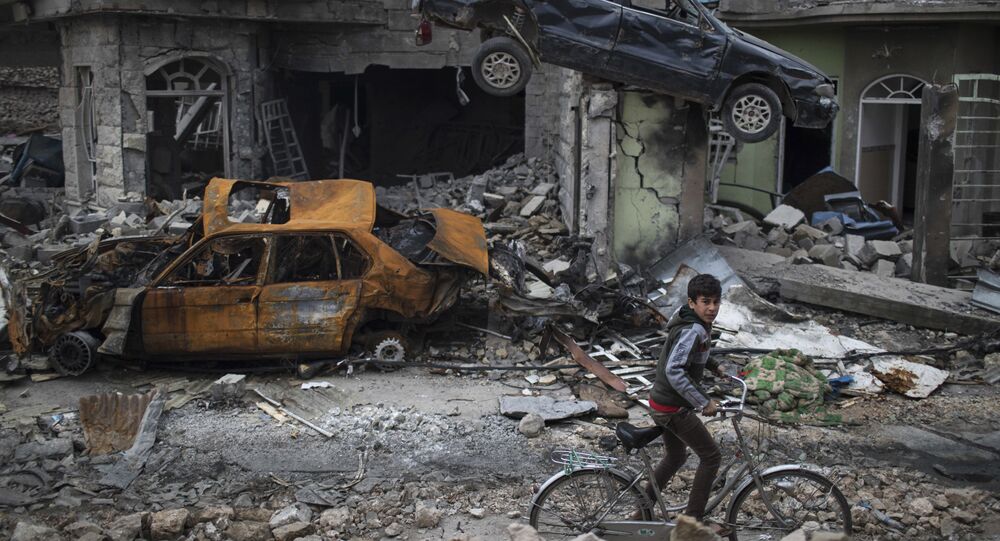 Iraqi government forces continue to liberate the city of Mosul from Daesh militants block by block, and the terrorists are forcing civilians to act as human shields, the city's residents told RIA Novosti.

© REUTERS / Andres Martinez Casares
Daesh Leader Baghdadi May Be in Iraqi Mosul Surrounded by Government Forces
Daesh (ISIS/ISIL) fighters are terrorizing residents in Mosul, preventing them from fleeing areas under jihadist control and forcing them into buildings under attack from government forces and the US-led coalition, the city's residents told RIA Novosti.

Civilians trying to flee terrorist-held areas are regarded as "defectors," by Daesh, who shoot them in the back as they flee.

"We lived on the outskirts of the city and when government forces approached our district, Daesh came to us and demanded that we move to the center of the city. They brought us here by force in order to use us as human shields," Vaad Abbasi, an elderly Mosul resident, told RIA Novosti.

He said that terrorist snipers often fill buildings with innocents before using the windows to fire at Iraqi helicopters and ground forces.

"After they shoot at a helicopter or a soldier, a few minutes later military aircraft appear in the sky and the house is bombed or hit by a missile. Civilians are dying," Abbasi said.

In October, an Iraqi-led operation was launched to recapture Mosul from the terror group. The Iraqi army is working with Shiite militia, Kurdish Peshmerga forces and federal police, with aerial backing from the US-led coalition.

In January 2017 the Iraqi government announced it had retaken eastern Mosul from the terror group, which had controlled the city since 2014. However, Daesh fighters remain entrenched in western Mosul, where they are attacking civilians and using them as human shields.

© AFP 2020 / AHMAD AL-RUBAYE
Battle Heats Up: Iraqi Forces Approaching Daesh-Seized Al-Nuri Mosque in Mosul
On Tuesday, UN High Commissioner for Human Rights Zeid Ra'ad al-Hussein said that between February 17 and March 22 at least 307 civilians had been killed and 273 wounded in western Mosul. The terrorist group is forcing civilians into houses from which they attack government forces and shooting residents in the back as they try to flee.

"This is an enemy that ruthlessly exploits civilians to serve its own ends, and clearly has not even the faintest qualm about deliberately placing them in danger. It is vital that the Iraqi Security Forces and their Coalition partners avoid this trap," al-Hussein said.

Iraqi and US forces have been criticized for not doing more to avoid civilian deaths.

According to Amnesty International, hundreds of civilians have been killed by airstrikes inside their homes or in places where they sought refuge after following Iraqi government advice not to leave during the anti-Daesh offensive.

Last month it was reported that more than 200 civilians had been killed in an airstrike carried out by the US-led coalition in the neighborhood of Mosul al-Jadida, where Iraqi and coalition forces are battling Daesh militants.

Local residents reported that the airstrike hit an explosive-filled truck used by Daesh, causing a massive explosion that collapsed nearby residential buildings.

Daesh Behind Deaths of Civilians in Mosul, Not US-Led Coalition Strike