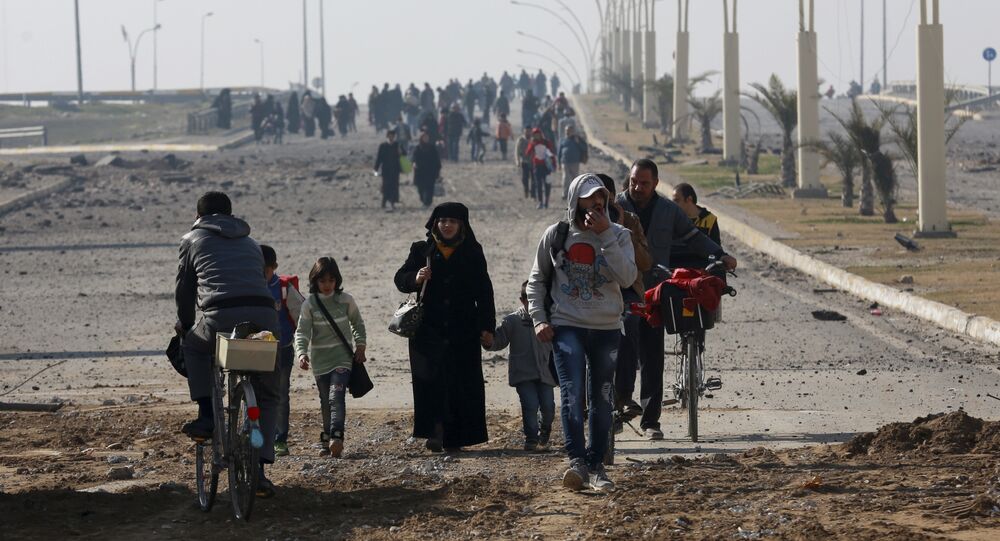 Humanitarian Disaster in Mosul 'Not Getting International Coverage It Deserves'

More than a million civilians in Mosul face a catastrophic humanitarian situation which is not receiving the media attention it deserves, Becky Bakr Abdulla of the Norwegian Refugee Council told Radio Sputnik.

On Wednesday the Iraqi military announced they had retaken control of east Mosul from the terrorist group Daesh (ISIS-ISIL) after months of fighting.

In October the Iraqi army, with support from Shiite militia, Kurdish Peshmerga forces and federal police and the backing of the US-led coalition, launched an offensive to liberate Mosul from the jihadist terror group, which has occupied the city since July 2014.

Mosul, Iraq's second-largest city, had a population of around 2.5 million before it was captured by Daesh. Between one and 1.5 million people are believed to still reside in the city and the UN Refugee Agency has warned that up to one million Iraqis could flee Mosul during the course of the offensive to regain government control.

According to a UN report published January 15, more than 148,000 people are currently displaced as a result of the conflict in Mosul city that began on October 17 2017, including an increase of nearly 12,500 people in the last week.

Becky Bakr Abdulla of the Norwegian Refugee Council told Radio Sputnik that there are increasing concerns for the people who remain trapped in the west of the city.

"We are increasingly concerned for around 750,000 people who are still trapped in the western part of Mosul, they're still trapped under ISIS (Daesh) control, as the fighting is advancing toward that side of the city," Abdulla said.

© AFP 2021 / THOMAS COEX
Iraqi Military Releases Footage of Foreign Daesh Militants’ Docs Found in Mosul (VIDEO)
Since access routes were cut off several months ago, people in western Mosul have not had proper access to food, drinking water, medicine or electricity. Humanitarian groups have not entered that part of the city for more than two years.

Last week the UN said that almost half of all the casualties in the offensive to retake Mosul have been civilians. Families arriving at refugee camps reported that Daesh snipers are targeting civilians as they try to leave the city.

"The families we are meeting who are managing to come out are completely traumatized, they've got nothing left. No homes, no nothing; their children have not attended school for over two years. In addition to that they've lost many of their loves ones and there are many, many examples of people who have actually died on their way out, they've actually not made it to safety," Abdulla said.

The supply of clean water in western Mosul is under Daesh control, and according to anecdotal reports the water supply for residents is limited.

© REUTERS / Alaa Al-Marjani
Some Don't Want Full Liberation of Mosul 'So That Many Things Can Remain Buried'
In eastern Mosul, where around 700,000 people have returned to their homes in areas which have been retaken by Iraqi security forces, conditions remain extremely difficult. The rebuilding of the city will require a lot of time and investment.

"The supplies of food and water and other items you need to survive are very irregular, and the buildings and infrastructure are damaged – many of these people don't even have homes to go back to. There are still a lot of explosive hazards, even in the eastern part of the city," Abdulla said.

The aid worker compared media coverage of the humanitarian situation in Iraq with reports about the military situation there.

"We see that the military and the political narrative in Iraq get quite a few media hits and a lot of attention, but when it comes to the civilian situation and how this brutal, ongoing crisis in Iraq which has been going on for decades now is affecting families, that's definitely not getting the coverage and the support that it needs from the international community; a lot more needs to be done."