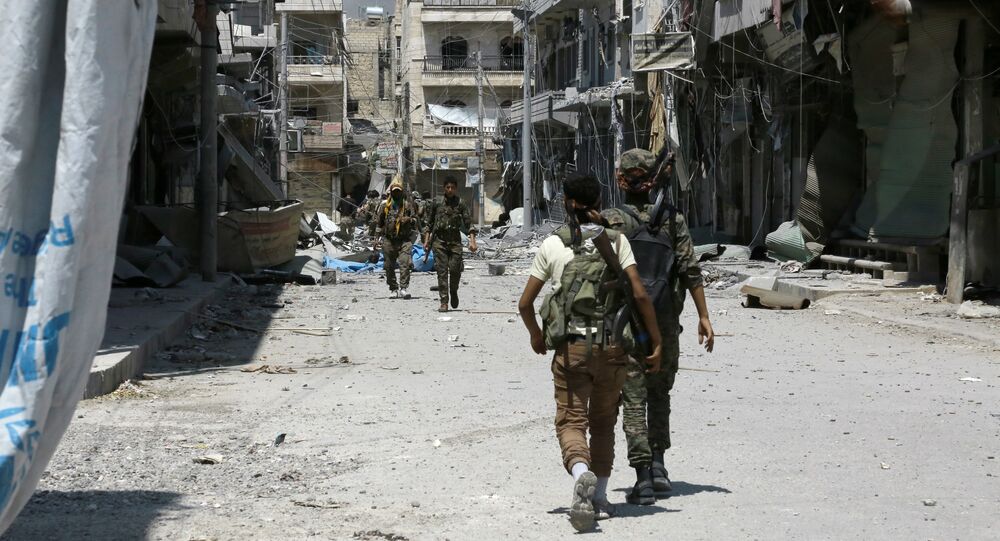 A high-ranking representative of the Syrian Democratic Forces, who wished not to disclose his name, has told Sputnik Turkiye that the US is "taking all necessary measures" to defend the Syrian city of Manbij from an attack by the Turkish military. It has set up a military base in the city and hung up its flag as a "warning sign" to Ankara.

The US is "taking all necessary measures" to defend the Syrian city of Manbij in the Aleppo Governorate, 30 kilometers west of the Euphrates, which is currently under control of the Syrian Democratic Forces (SDF), from an attack by the Turkish Armed Forces and fighters from the Free Syrian Army (FSA), the SDF representative told Sputnik Turkiye.

In particular, he said, US servicemen have set up a military base in the city and are sending an additional contingent there. They are also deploying heavy weaponry and armored vehicles to the area.

Alongside setting up the military base in Manbij, the US is deploying servicemen and armaments to the northern and western parts of the city.

"Turkey and the Turkey-backed Free Syrian Army (FSA) are getting ready for an attack on Manbij, and so we are getting ready to defend the city and are in constant talks with our ally, the US," the SDF representative told Sputnik.

He further explained that last week they had a meeting with Joseph Votel, the commander of the US Central Command (USCENTCOM), during which they discussed a security threat to Manbij coming from Turkey.

© REUTERS / Khalil Ashawi
Turkey's Move Against Kurds in Manbij to Impact Coalition Campaign - Commander
"We [SDF] have said that in case of an attack on the city will be forced to halt the operation to liberate Raqqa and will redeploy our forces to Manbij," he told Sputnik.

"In his turn, Votel assured us that the American side will take all necessary measures to prevent an attack by Turkish forces on the city," he added.

The SDF representative further noted that US servicemen will be holding talks with representatives from Turkey and added that the US intends to increase its contingent in Manbij, sending heavy weaponry and tanks there in order to shore up the city's defenses.

Just two days after their meeting with Votel, the US set up a military base in the city to be able to defend it from an attack by Turkish armed forces. The US flag was flown above the base.

Flying the flag, he said, is a message, a warning to Turkey that the city is under the defense of the US.

© REUTERS / Khalil Ashawi
Syrian Kurds Pledge to Mount 'Fierce Resistance' if Turkish Army Moves to Manbij
The US servicemen will also take part in round-the-clock surveillance and patrols in the west and the north of the city to be able to prevent any possible attack.

In addition, he said, armored vehicles under the US flag have been deployed in the north of the city. US servicemen have been also deployed to its western areas. On Tuesday they sent more tanks and armored vehicles to Manbij and promised that the city will also be under the defense of the US-led coalition forces.