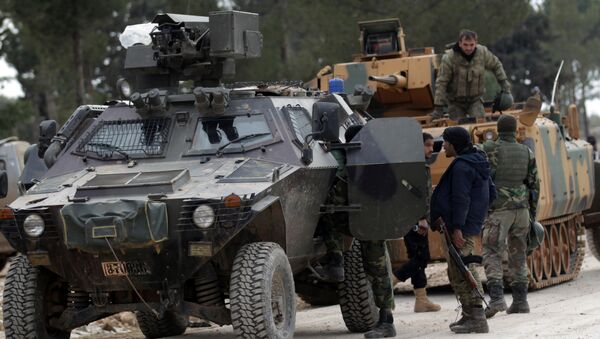 Turkish military move against the Kurdish forces in the Syrian city of Manbij could interfere with the US-led coalition campaign against the Daesh terror group (banned in Russia), US Central Command head Gen. Joseph Votel said on Tuesday.

The move could "have an impact on the coalition campaign plan," Votel said in an interview with Foreign Policy.

The commander noted that the United States is "fully engaged" with Turkey and is trying to work out a solution for northern Syria to make sure that US-backed and Turkish forces do not fight each other.

Safe zones in Syria could operate successfully in the areas that have already been taken under control, Votel said.

The idea of creating safe zones in Syria is "a viable concept," Votel said as quoted by Foreign Policy.

Why 'Syrian Talks Likely to Reach a Dead End if Kurds Not Involved'
The commander noted that the safe zones could operate successfully in "areas that have already been secured where we already have humanitarian and stabilization activities ongoing."

Votel underscored, however, that creation of safe zones would not be easy, according to the magazine.

The US general explained that it would demand "all of the resources" in place, including ground troops which would be used to hold the area.

Turkish chief presidential adviser Ilnur Cevik told Sputnik on Tuesday that Ankara would be against the creation of safe zones in Kurdish areas in Syria because they might be used by Kurdistan Workers' Party (PKK), considered a terrorist organization in Turkey.

The US Department of Defense has sent civil affairs teams to Syria to assess humanitarian situation in the country, Votel said.

US military teams are assessing the needs on the humanitarian front, but a "broader international effort" is needed to resolve the problem, he added.

Second Explosion in One Day Occurs Near Al-Bab Amid Turkish-Led Op Victory
On August 24, the Turkish army launched Operation Euphrates Shield against militants of the Daesh group, which is outlawed in Russia and many other countries. Since then the Turkish-led forces have driven Daesh from a number of settlements in northern Syria. The Turkish forces, with assistance from Syrian opposition fighters, occupied the city of Jarablus in northern Syria.

Turkish President Recep Tayyip Erdogan said that the aim of the operation is to clear the territory of 5,000 square kilometers (1,930 square miles) in Syria as part of the operation and create a safe zone for refugees.

Syria's six-year civil war has displaced around 10 million people, according to the United Nations. Approximately 6 million of them are internally displaced. Some 13 million people are in need of humanitarian assistance in the country.