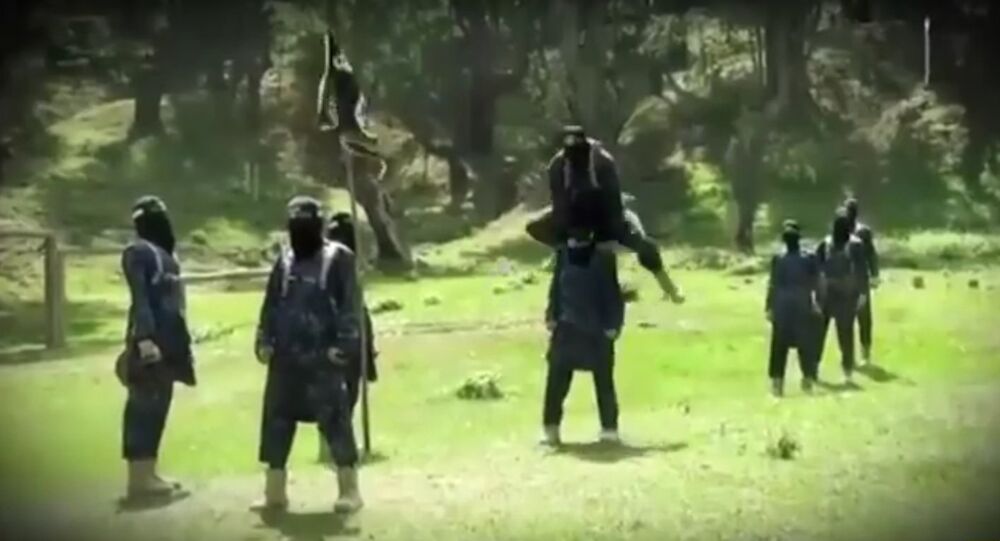 During a meeting with his Afghan counterpart Salahaddin Rabbani on Tuesday, Russia’s Foreign Minister Sergei Lavrov said Moscow was worried by Daesh’s growing presence in Afghanistan. In an interview with Sputnik, Turkish expert on Central Asia, Esedullah Oğuz, commented on the situation.

© AFP 2021 / NOORULLAH SHIRZADA
Daesh Abducts 13 Religious Scholars in Eastern Afghanistan – Province Official
Esedullah Oğuz said that, hard hit by the antiterrorist operations in Syria and Iraq, the terrorist group was now trying to open a new front in northern Afghanistan were it has seen a great number of militants from Central Asia joining its ranks over the past few years.

Describing Turkey as the primary route used by terrrosists on their  way from Central Asia to Afghanistan, Oğuz underscored the need for Turkey to tighten its border controls.

“The Turkish border has become a transit point where [terrorists] from Afghanistan and Central Asia have no problem getting in for just 500 dollars,” Esedullah Oğuz told Sputnik Turkey.

He added that the Turkish authorities have recently been working hard to toughen border controls.

“During an operation in Istanbul’s Zeytinburnu neighborhood, police arrested 400 people who had illegally crossed the Turkish border. The area is often used by jihadists from Central Asia on their way to Syria and Iraq.”

Esedullah Oğuz  also said that after the US started helping Islamist radicals during the 1980s, jihadist organizations began popping up in Afghanistan thus providing an ideological background for Daesh activity in the region.

“In 2001 the US vowed to turn Afghanistan into a terrorism-free region. Fifteen years on, Afghanistan still remains a source of terrorist threat.”

“Afghanistan’s state and military structure was modeled on the one they have in the United States – a contract army and a presidential system. As a result, the country got a weak and unstable system vulnerable to terrorist attacks."

© Photo : Youtube/PressTV Documentaries
Daesh Leader Suspected of Major Kabul Attacks Killed in Afghanistan
"Right now the Afghan government has some 350,000 soldiers on its payroll. What the country really needs, however, is a conscription army, not a contract one like in the US,” Esedullah Oğuz emphasized.

Afghanistan is suffering from the activity of Taliban, a militant group formed in the 1990s, seeking to establish strict Sharia law in Afghanistan and Pakistan.

The crisis in the country prompted the emergence of local cells of other extremist organizations such as Daesh, which is outlawed in Russia and numerous other countries.