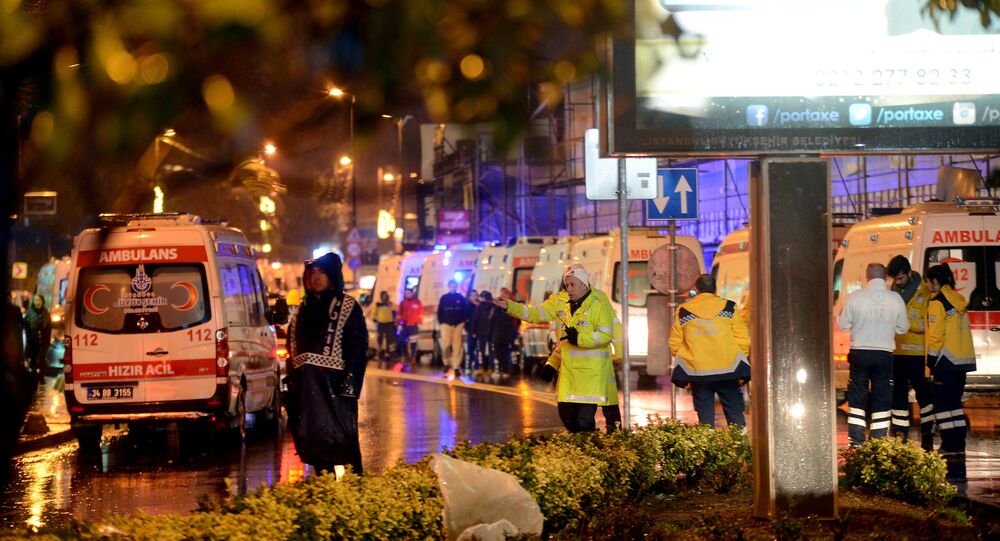 An unidentified gunman, who still remains on the loose, attacked Reina club in Turkey's Istanbul during New Year's celebration, killing at least 39 people and wounding another 69 visitors.

MOSCOW (Sputnik) — Fifteen or 16 of the victims of the attack on the club, located on the Bosphorus Embankment in the European part of Istanbul, were foreigners.

According to the media reports, several men talking in Arabic got inside the club with 700-800 people and fired the crowd. The visitors jumped in the Bosphorus Strait in an attempt to save themselves.

Turkish Prime Minister Binali Yildirim rejected the reports the attacker was dressed like a Santa Claus. He said that the shooter left his gun at the scene of the attack.

According to media reports, the suspect behind the attack took a taxi to the scene. The taxi driver, who gave a lift to the attacker, is being questioned by police.

Turkish President Recep Tayyip Erdogan condemned the terrorist attack and said that the perpetrators sought to create chaos in the country.

Turkish Family and Social Policies Minister Fatma Betul Sayan Kaya said that Saudi Arabian, Moroccan, Lebanese, and Libyan nationals are among the victims of the attack.

Four Lebanese and three Moroccan were wounded in the shooting.

The Israeli Foreign Ministry that its national, Leanne Nasser, 19, also died in the attack.

The Jordanian Ministry of Foreign and Expatriate Affairs official spokesperson said that three Jordanian citizens were killed and four others wounded in the attack.

Two Tunisians are also among the victims.

Belgian Foreign Minister Didier Reynders posted in his official Twitter account that one Belgian citizen was likely to be among those killed in the shooting.

​Indian Foreign Minister Sushma Swaraj confirmed that his two compatriots were killed in the club.

I have a bad news from Turkey. We have lost two Indian nationals in the Istanbul attack. Indian Ambassador is on way to Istanbul. /1

​The victims are Mr.Abis Rizvi son of former Rajya Sabha MP and Ms.Khushi Shah from Gujarat. /2

Leaders from across the world, including Russia, France, Germany, the United Kingdom and Italy condemned the terrorist attack.

"It is hard to imagine a more cynical crime than the murder of innocent civilians in the midst of New Year's holiday. But the terrorists are absolutely alien to the concept of human morality. Our common duty is to respond decisively to the terrorist aggression," Putin said.

He added that Russia was and would remain Turkey's ally in the fight against this evil.

The Belorusian Foreign Ministry said that Minsk stood in solidarity with Ankara in that difficult moment.

"The news of the terrorist attack in Istanbul in the New Year's Eve, which killed and injured dozens of innocent civilians from different countries were net in Belarus with deep sorrow. The Belarusian side strongly condemns all acts of terrorism and reaffirms solidarity with the friendly people of Turkey," the message read.

1/2 We are deeply moved by the terror attack in #Istanbul. Our thoughts are with the families of the victims.

​EU foreign policy chief Federica Mogherini expressed condolences over the deadly terror attack and noted that the work on preventing such tragedies would be continued.

2017 starts with an attack in #Istanbul. Our thoughts are with victims and their loved ones. We continue to work to prevent these tragedies

"Once more, Turkey has been shaken by the scourge of terrorist violence. I condemn in the strongest terms this brutal and perfidious attack against innocent people celebrating the beginning of the New Year. Together, we stand with our Turkish friends in these hours of mourning," Kurz said.

Zanier added that the attack was another attempt to instill fear in society and said that the response would be to intensify joint efforts and build a strong common front against terrorism.

"The tragedy in Istanbul reminds us that the fight against terrorism has no pauses, no holidays, no countries and no continents. The unity is necessary at any cost," Alfano said on Twitter.

"The President of the [French] Republic [Francois Hollande] strongly condemns the terrorist act, which claimed lives of at least 39 people at the New Year’s party at the nightclub in Istanbul," a statement by the Elysee Palace read.

German Foreign Minister Frank-Walter Steinmeier said he was "appalled by the news about the New Year’s Eve on the Bosporus."

"At these difficult times we are on the side of Turkey," Steinmeier said as quoted in a statement by the German Foreign Ministry.

"China strongly condemns the incident, firmly opposes any form of terrorism, intends to strengthen together with the Turkish side and the international community the coordination and cooperation and defend global and regional peace and security," Hua said as quoted in the ministry’s statement.

The Kazakhstan’s Foreign Ministry said the attack was a "heinous crime."

"The world has experienced yet another manifestation of terrorism in the form of such a heinous crime, the organizers and inspirers of which must be detected and punished in the framework of a fair trial," the country’s foreign ministry said in a statement.

Putin Expresses Condolences to Erdogan Over Terrorist Attack in Istanbul