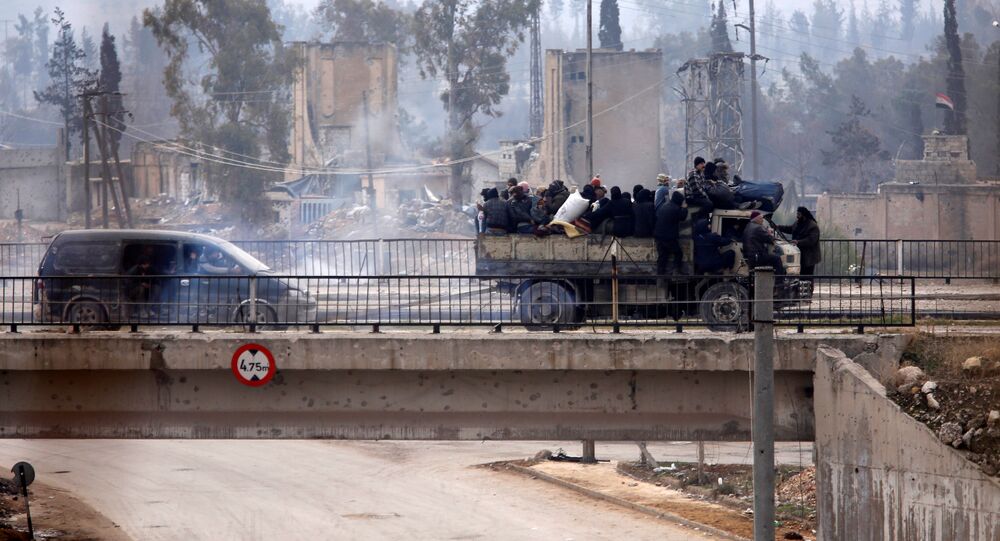 The liberation of Aleppo has not brought the devastating Syrian conflict to an end, but the victory offers hope that the crisis which has lasted since March 2011 will be resolved, Syrian journalist and international relations scholar Abbas Juma told Radio Sputnik.

"The situation has clearly become better. The liberation of eastern Aleppo marks a major breakthrough," he said. "There are still many challenges. The situation is far from being stable. But [the victory in Aleppo] has brought hope that the conflict will be resolved."

© AFP 2021 / KARAM AL-MASRI
'It's Shame and Disgrace' to Claim Aleppo Has Fallen Instead of Hailing Its Liberation
These comments came in response to Tuesday's meeting, involving foreign and defense ministers of Russia, Turkey and Iran who discussed ways to put an end to fighting in the war-torn Arab country. The three countries said that they were ready to "facilitate" the upcoming agreement which is currently negotiated between the Syrian government and the opposition. They also noted that they were ready to provide guarantees that this deal will be fully implemented.

"We have to remember that there is diplomacy and there is reality. Sadly, these two do not always overlap," Abbas Juma warned, adding that he was optimistic about Syria's future. "I share the view expressed by many experts that the situation [in Syria] will no longer remain at an impasse. Russia, Turkey and Iran have real leverage," he said.

© REUTERS / Omar Sanadiki
Hundreds Gather for Christmas Celebrations in Liberated Aleppo (VIDEO)
The political analyst further mentioned that Russia will not leave the assassination of Ambassador Andrey Karlov without a response.

"Terrorists will pay" for the murder of Russia's envoy to Turkey, he noted. "They will all be destroyed by hook or by crook. I am more than sure of it."

Prominent Russian diplomat Andrey Karlov was fatally shot by Mevlut Mert Altintas, a Turkish police officer, at an art gallery exhibition in Ankara. The Russian Foreign Ministry described the attack as a terrorist act. A farewell ceremony for the Russian ambassador took place in Moscow on Thursday, with President Vladimir Putin attending.

Aleppo Residents Had Access to Medical Aid Throughout Conflict