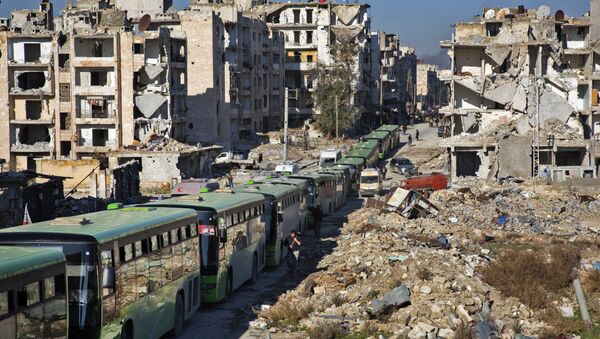 It is "a shame and a disgrace" to claim that Aleppo, one of the largest cities in Syria which has been fully liberated last week, "has fallen," Father Mtanios Haddad, archimandrite of the Melkite Greek Catholic Church, told Sputnik.

Aleppo, the commercial and industrial heart of the country prior to the war, "did not fall," he insisted. "The city has once again become part of the Syrian state thanks to countless sacrifices that our army had to make. The Syrian Arab Army paid for Aleppo's liberation with blood and suffering."

Fake Photo-Op: Staged Aleppo Disaster Videos Share 'One and the Same Scenario'
Aleppo was partially controlled by Damascus-led forces and rebels for the larger part of the nearly six-years-long war that has devastated Syria. The Syrian Arab Army freed the majority of districts controlled by the militants on December 13. Three days later, the Russian Ministry of Defense announced that the city was under full government control.

Father Haddad, a Syrian, who is currently living in Rome, also hailed Russia for its role in freeing Aleppo.

"I would like to thank Russia for Hmeymim which has become not only a military, but also a peacekeeping base, a base that reunifies the Syrian people," he added. "Russia understood the danger of terrorism and came to the assistance of the legitimate government and the people who have been infected with the virus of terrorism." 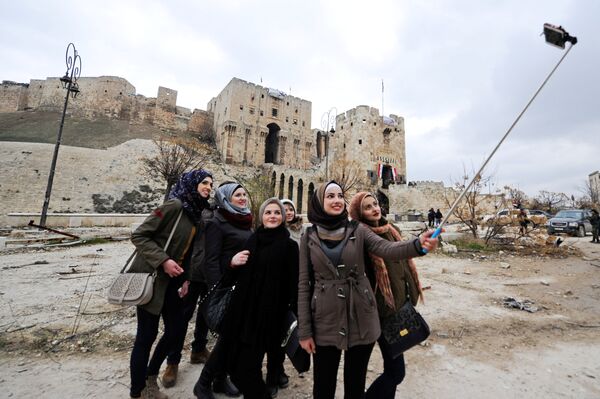 The Syrian priest further criticized the United States and its allies for playing an "evil game" in Syria.

Liberated East Aleppo Suffering From Form of 'Stockholm Syndrome'
"Policymakers in Europe and the United States were predicting that President Bashar al-Assad would no longer be in power in three months, that he had lost legitimacy. They wanted to see it all through to the end. But Syria and Russia have changed everything. We are fighting against terrorism," he said. "Countries in the West do not want to accept their defeat. They don't want to tell their people that their hands are covered with blood of the Syrian Arab Army."

Father Haddad also expressed his condolences to the family of Russian Ambassador to Turkey Andrey Karlov, who was murdered in Ankara on Monday, the Russian people and President Putin.

"I think that this murder was more than a mere terrorist act, but rather a betrayal of the cause of peace since Russia is at the forefront of the fight against terrorism and has pledged to bring at least some peace to the embattled Middle East," he said, describing the killing as "a betrayal" and "a stab in the back."

Militants in Aleppo Start Releasing Captured Syrian Servicemen
Distinguished Russian diplomat Andrey Karlov was fatally shot by Mevlut Mert Altintas, a Turkish police officer, at an art gallery exhibition in Ankara. The Russian Foreign Ministry described the attack as a terrorist act. A farewell ceremony for the Russian ambassador is scheduled to take place in Moscow on Thursday. Russian President Vladimir Putin is expected to attend.

In Father Haddad's opinion, terrorists have no right to target envoys because they are a symbol of the country they represent. The priest described terrorists' philosophy of life as seeking terror and the murder of other people.

"They don't want to engage in a dialogue with anyone," he said. "Terrorists do not accept other religions. They do not listen to arguments put forward by other people. They destroy them. This is not power, but weakness of a person who does not want to see anything different to what he believes in."