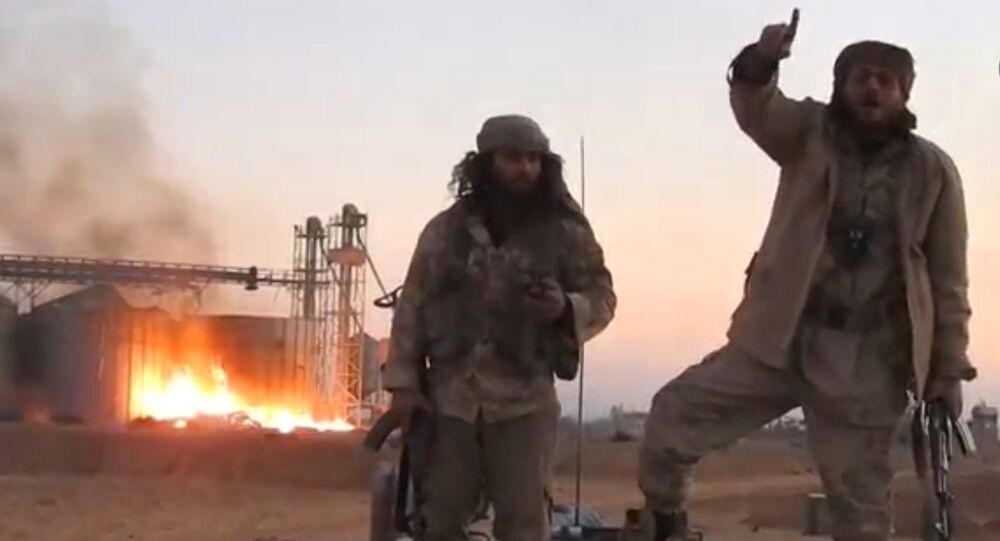 Daesh's attack on the ancient Syrian city of Palmyra was staged for propaganda purposes, and it also reflects a desire to make government forces withdraw from Aleppo, experts told RIA Novosti.

© Sputnik / Mikhail Voskresenskiy
Some 80% of Palmyra Residents Evacuated, Rest Still in Danger - Homs Governor
Speaking to RIA Novosti, experts suggested that Daesh's assault on the Syrian city of Palmyra was intended to compel government forces to pull out of the city and boost the jihadists' morale in the wake of their recent defeats.

The experts spoke amid reports that Daesh had managed to retake Palmyra, hours after they were driven back by Russia's Aerospace Forces.

The Russian Center for Syrian Reconciliation said that more than 4,000 Daesh militants regrouped and attempted to reclaim Palmyra, which was liberated from the jihadists earlier this year.

Boris Dolgov of the Moscow-based Institute of Oriental Studies described Daesh's attack on Palmyra as "a deceptive maneuver aimed at distracting the government troops from Aleppo, where they operate quite successfully."

Another factor is the fact that Palmyra is situated near the intersection of roads that lead to the various regions of Syria, and that a spate of oil fields are located near this ancient city, according to Dolgov.

"Also, Daesh's assault on Palmyra has a significant propaganda effect. The attack was conducted in order to increase the morale of Daesh terrorists and their affiliated groups and to show that they are still able to advance," he pointed out.

He was echoed by Sergey Demidenko of the Russian Presidential Academy of National Economy and Public Administration, who also pointed to the propaganda effect of Daesh's attacks against Palmyra.

"As for Palmyra, it is a city which first of all has an archaeological value rather than a strategic or economic one," Demidenko said, referring to Daesh's propaganda ballyhoo around its recapturing Palmyra.

Meanwhile, Homs Governor Talal Barazi has announced that Syrian government forces had managed to evacuate about 80 percent of Palmyra's population, and that the fate of the rest is cause for concern.

He noted that the Syrian Army is regrouping promptly with allies, suggesting that control over Palmyra could be reestablished in the near future.

© Sputnik / Mikhail Voskresenskiy
Looted Palmyra Treasures Discovered in Geneva Warehouse
The Syrian Arab Army, backed by the Russian Aerospace Forces, liberated Palmyra in March, 2016, nearly a year after it was captured by the internationally-condemned terrorist organization Daesh in May 2015.

During the invasion, the militants destroyed a number of ancient objects, including a necropolis, the Arch of Triumph, as well as the temples of Baal Shamin and Bel.