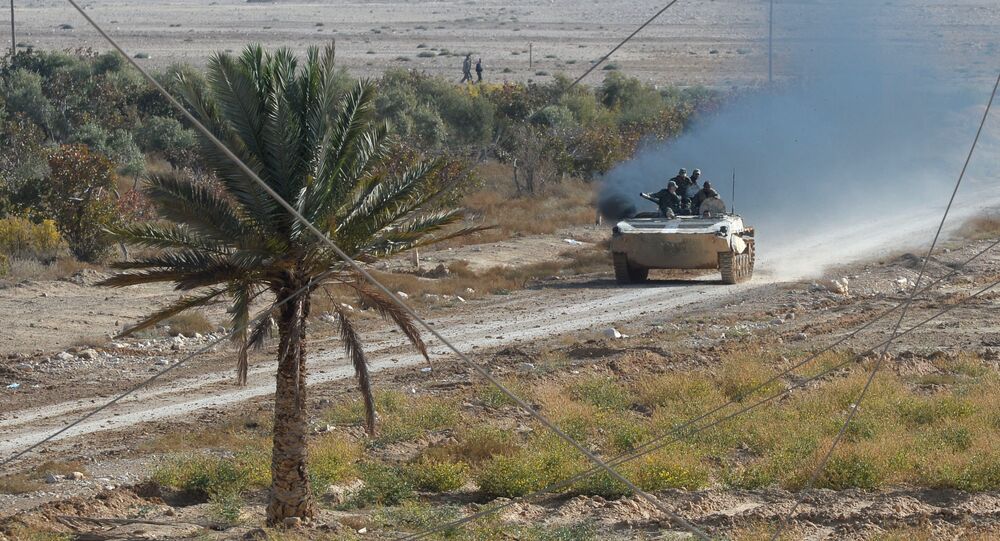 In its analysis of the recently-intensified Daesh assaults to the east of Palmyra, Russian media have noted that they might be due to government forces having redeployed from this area to Aleppo, intentionally weakening the area; however, it say, their tactical blunders should not be safeguarded with the lives of Russian servicemen.

The outlet also refers to the recent downing of a helicopter carrying two Russian pilots which resulted in the death of both Russian servicemen.

The newspaper therefore suggests that the Syrian General Staff has intentionally weakened its group near Palmyra by redeploying additional units to Aleppo and Damascus province.

It notes a successful assault the SAA conducted with the help of the Hezbollah units on leftover Al-Nusra Front units in Damascus’ East Ghouta.

At the same very time, it says, the government forces have intensified an assault on jihadists in Aleppo.

© Sputnik /
Russian Tu-22M3 Strategic Long-Range Bombers Destroy Daesh Camp, Tanks & Group of Militants in Syria
The outlet notes that while the attack on Aleppo, with the help of the Russian air strikes, looks more or less reasonable and successful, the General Staff could have well waited with the operation in East Ghouta, a region of Greater Damascus.

It argues that in order to succeed in these operations, Damascus has to redeploy a considerable number of units, exposing the area near Palmyra.

The report stated that the continuous redeployment of forces between fronts has a negative impact on the overall combat effectiveness of the army. However, Damascus seems to think differently, it notes.

As a result, the tactical miscalculations of Syria's General Staff are being safeguarded with the lives of Russian pilots.

Is This the American ‘Plan B’ Washington Has Threatened Russia With?

In a separate analysis on the conflict, Semyon Bagdasarov, Director of the Moscow-based Center for Middle Eastern and Central Asian Studies, says that the militants have used the Russian-brokered ceasefire to rearm their units.

“During the cessation of hostilities the jihadists have not only recruited new fighters into their ranks but have received modern armament,” he said in an interview with the Russian online newspaper Svobodnaya Pressa.

© Photo : twitter.com
Heroic Russian Pilots in Syria 'Died Having Stopped a Terrorist Advance'
Turkey, he says, was one of the suppliers. For example, he says, a Man-Portable Air-Defense System (MANPADS) Stinger was used by the terrorists to bring down the helicopter carrying the two Russian pilots on July 8 near Palmyra; it was assembled in Turkey under an American license.

Syria's Minister of Information, he says, warned as early as May that the militants had received dozens of MANPADS and that Russia should brace itself for the loss of its aircraft. So here they come.

The analyst warns that it will be more difficult to shut the border crossings and clean up Aleppo.  He also says that there are many Turkish professional servicemen fighting alongside the Daesh militants. Already half a year ago the Turkish Special Forces were fighting in the frontier zone, and now they have been noticed near Aleppo.

“All of this reminds us of the Plan B the US threatened us with,” he said.

“The arms supplies to the jihadists have intensified. Let us put in place our mirror-image “Plan B”, he suggested.

The expert explained that it might include assistance to the military wing of the Kurdistan Workers Party (PKK), the intensification of arms supplies to the Syrian Army and assistance to the People’s United Revolutionary Movement.  The group was only established in May but has already performed well in the fight against Turkish servicemen.

When asked whether these shipments could provoke Ankara's wrath, Bagdasarov replied that it is highly unlikely that Turkey would choose to exacerbate a proxy-conflict with Russia. It itself is nearly on the brink of the civil war and its open interference in Syria might well result in its own collapse, he concluded.