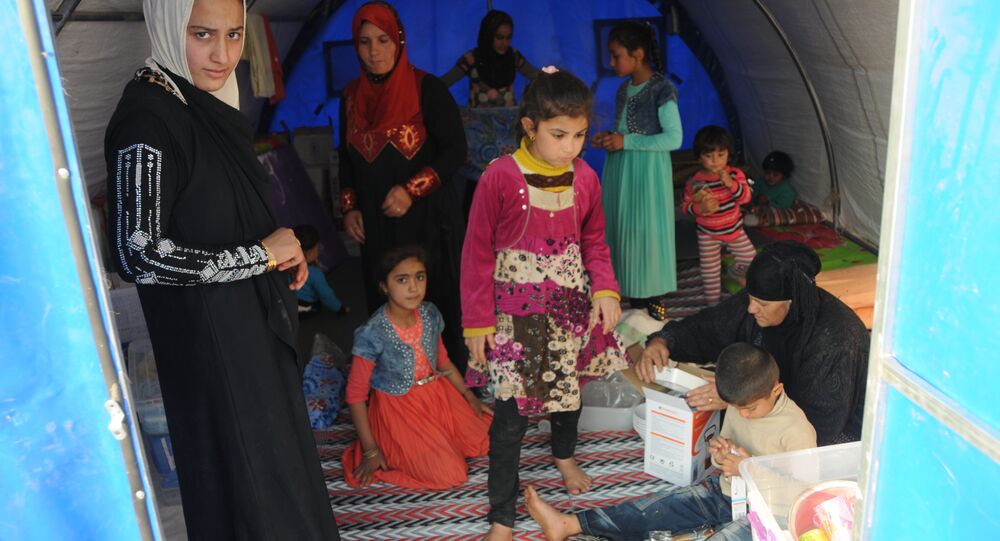 The past few days have seen an ever-increasing number of civilians fleeing the northern Iraqi city of Mosul, where a military operation against Daesh is under way.

© Sputnik / Hikmet Durgun
'Unsavory Mix': Liberating of Mosul Will Not Bring Iraq's Troubles to an End
With a military operation in Mosul, Iraq currently under way, the flow of civilians fleeing the city and the nearby villages and taking shelter in Peshmerga-controlled areas increases with every passing day.

On Wednesday, another 1,800 people, who fled from the villages of Bazdava and Kornama east of Mosul, were accommodated by Peshmerga fighters in the Hazir refugee camp in Erbil, the capital of Iraqi Kurdistan.

At the entrance to the Hazir camp, the refugees, most of them Kurds and Arabs, passed through security screening and passport control.

Speaking to a Sputnik Turkey correspondent, a 32-year-old Kurdish woman, Newal Hazım, who fled the village of Tobzavа north of Mosul, said that she and her four children were very afraid of being blown up by land mines laid everywhere by Daesh (ISIL/ISIS) terrorists.

"The children started to cry when my three-year-old daughter said that she doesn't want our house and our village. The wars in Iraq never end. The war between Iran and Iraq, between Iraq and the Peshmerga and the US invasion of Iraq turned our life into hell. I was displaced four times in my lifetime, and we live in permanent fear. We are tired of the war," she said.

60-year-old Medine Yusuf, resident of the village of Gorcelil east of Mosul, told Sputnik Turkey that the Iraqi army launched an offensive using heavy equipment in order to liberate her village from Daesh terrorists and that government forces had helped her flee the village, opening a passage to the country's north.

She said that she is alarmed by rumors that the situation in Iraq will never improve and that the war will not stop.

"The endless war has ruined our lives, antagonizing people against each other. Now a person has to first of all answer questions about his nationality and the religion he practices rather than his name. All this disappoints us very much," she said.

Speaking to Sputnik Turkey, 64-year-old Kurd Zeki Ali from the village of Hemdaniye north of Mosul said that "because of the oil reserves, all the major powers decided to establish their control over our territory, which is why the war does not stop affecting our loved ones, our children."

"When they invaded Iraqi land, the Americans claimed that they would bring democracy to our country, but all they brought us ten years on was Daesh.  Now we don't know how to get rid of this evil which forced us to lose our home and our Motherland. This nomadic life even prevents our children from getting a normal education," he said.

On October 17, Iraqi Prime Minister Haider Abadi announced the start of a military operation to recapture Mosul from the internationally-outlawed terrorist organization Daesh, with the help of US-led international coalition airstrikes.

© Wikipedia / Wmeinhart
German Magazine Uses Daesh Propaganda Video to Show All is Well in Mosul
Meanwhile, Iraqi Interior Ministry spokesman, Col. Saad Moen said that Iraqi security forces had killed over 1,100 Daesh terrorists and recaptured hundreds of miles of land as the advance against the Daesh stronghold from the south continued earlier this week.

In another development, Iraqi government troops, along with Peshmerga forces, have already liberated at least 81 villages from Daesh terrorists as part of the liberation of Mosul, according to media reports.