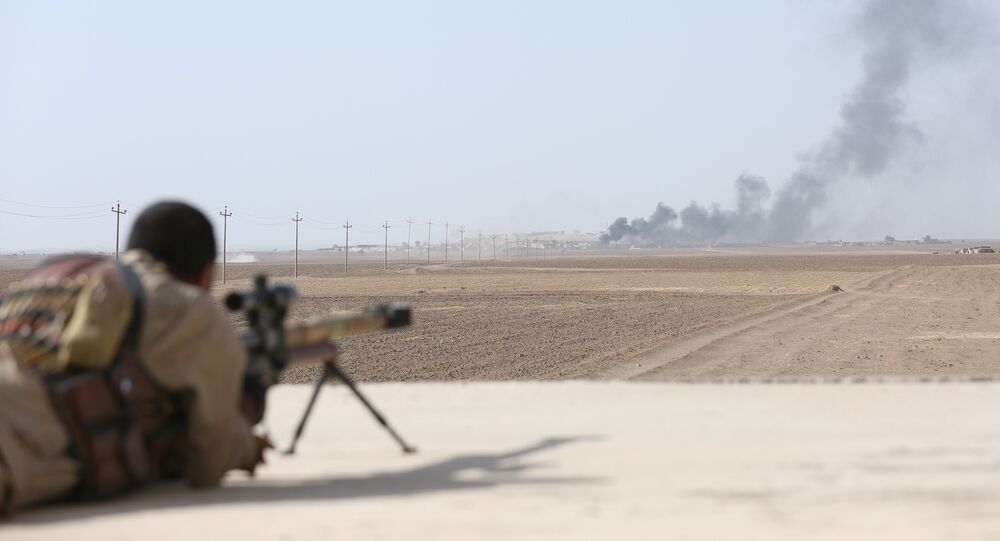 The Iraqi Air Force managed to kill a leader of the so-called Jund al-Khilafah, a terrorist known as Abu Tariq al Hayali, in an airstrike on an Daesh headquarters in the center of Mosul, according to Iraqi media.

MOSCOW (Sputnik) — The leader of Jund al-Khilafah, also known as Soldiers of the Caliphate, which has pledged loyalty to the Islamic State (ISIL or Daesh), has been killed in a strike by the Iraqi Air Force in Mosul, local media reported Tuesday, citing its source.

"The Iraqi Air Force has managed to kill a leader of the so-called Jund al-Khilafah, a terrorist known as Abu Tariq al Hayali, in an airstrike on an IS headquarters in the center of Mosul," the source told the Alsumaria broadcaster

© Sputnik / Hikmet Durgun
From Within the Belly of the Beast: Mosul Natives Taking Up Arms Against Daesh
Six other militants accompanying the leader were also killed in the airstrike, the source added.

The operation to retake Mosul from the Daesh, a jihadist group outlawed in Russia and a number of other states, is ongoing since October 17. More than 30,000 Iraqi and 4,000 Kurdish fighters are taking part in the offensive, backed by about 5,000 US troops and supported by coalition airstrikes. Mosul has been occupied by Daesh since 2014.