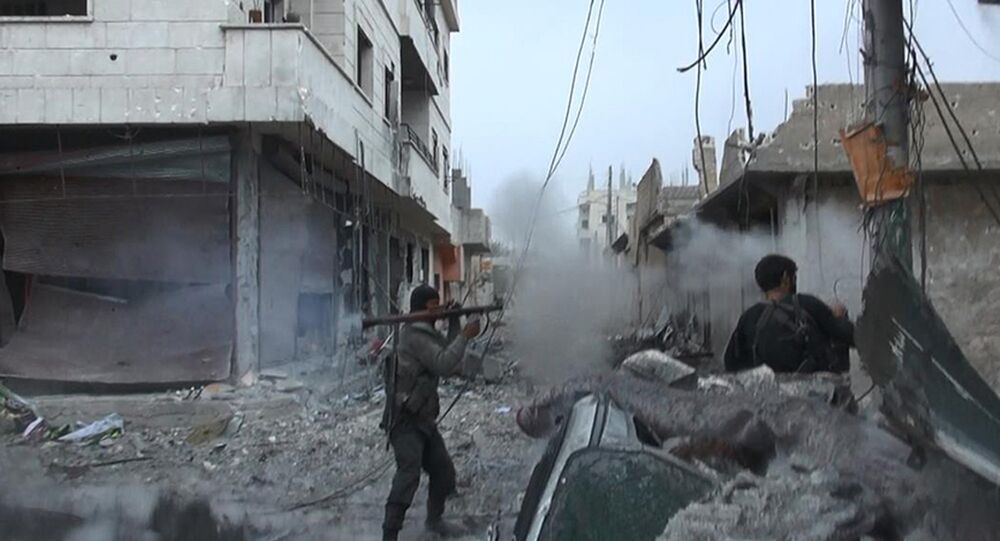 The United States has announced the beginning of the operation to reclaim Raqqa from Daesh in Syria, before the battle for Mosul in Iraq has ended, leading many to ask what ground forces are available to lead the new offensive.

Writer and political analyst Pepe Escobar assessed the prospects of the assault on Raqqa, and Syria’s future, on Radio Sputnik’s Loud & Clear program.

“It’s completely absurd to think about taking over Raqqa, especially in the sense that we already have a heady mix in the battle of Mosul,” Escobar commented, referring to the recent announcement by Steve Townsend, the commander of US forces in Iraq and Syria, who vowed an “urgent” offensive in Syria.

The move by the Pentagon comes in the wake of an upcoming reshuffle in US military brass, the analyst said, citing that current US Defense Secretary Ashton Carter will likely resign in three months. At the same time, spokespersons claiming to represent Daesh have announced that attacks outside the Middle East are in the planning stages. Still, the timing of the new offensive may not be opportune, Escobar asserted, as the seizure of Raqqa could take months.

© AP Photo / Marko Drobnjakovic
What's the Rush: Pentagon Waging 'Strange War' in Mosul and Raqqa
“It’s going to be an absolute nightmare,” Escobar claimed. “The battle of Raqqa will be an even headier mix [than the battle for Mosul], especially because it’s going to take place in Syria,” in regions where many armed militant groups are active.

At the same time, the Pentagon is “ambiguous” about what forces will be fighting alongside the Americans, Escobar noted. In an interview with CBS, Defense Secretary Carter mentioned Kurdish YPG and specific Arab factions as being the lead forces to launch an assault on Daesh in Raqqa. Escobar believes that, in Syria, the US can only count on YPG and what remains of the Free Syrian Army, at least the part that has not yet been absorbed by al-Qaeda.

“There are hundreds of fighters that won’t be capable to retake Raqqa,” Escobar suggested, adding that the only side that has the manpower to succeed in Raqqa is the Syrian Arab Army.

“It’s completely crazy when the head of the Pentagon is telling the world that they are going to reconquer Raqqa, which is inside of the Syrian territory and is officially controlled by Damascus,” he said. “They are going to do it with a bunch of expat troops and infiltrated forces, and that is absurd.”

© Sputnik / Hikmet Durgun
Turkey Not to Fight in Syrian Raqqa Alongside Kurdish Units
Concurrently, Turkey, NATO’s second-largest army and a longstanding US ally, has its own interests in Syria, Escobar said. Ankara is working hard to prevent Syrian Kurds from enjoying any autonomous rule, as the administration of Turkish President Tayyip Erdogan fears that self-rule would signal to the Kurds in southeast Turkey, the largest minority in that country, that they can enjoy the same freedoms.

“Washington doesn’t want to jeopardize fractured relations with Erdogan,” Escobar claimed. “At the same time they support the Peshmerga in Iraq. They cannot, though, openly support YPG and not enrage Turkey.”

Ankara wants to create a ‘safe zone’ along its border with Syria to prevent Syrian Kurds from uniting three Kurdish cantons that would serve to initiate a new Syrian Kurdistan.

“How could they [Turks] contribute to the battle for Raqqa if they will be fighting against Kurds? It’s impossible,” Escobar asserted, adding, “We will have two different battles: a battle to reconquer Raqqa and a battle between YPG and Turks along the borders.”

© Sputnik / Hikmet Durgun
Secret Insurgent Tactics: Daesh May Go Underground to Survive Mosul Offensive
Retaking Raqqa is not a real US objective, Escobar said. Citing a 2012 leaked intelligence report, he offered that the Pentagon would like to establish a Salafist principality in Eastern Syria.

“Syria is already dismembered, in fact,” Escobar stated. “The whole of  Eastern Syria is in turmoil, with Daesh fighters scattered across it. That suits the American purpose – keep Damascus in check and interfere with its sovereignty on its own territory.”

A Salafist principality would be out of the control of Damascus, and suitable for sustaining managed chaos in the region for the foreseeable future.