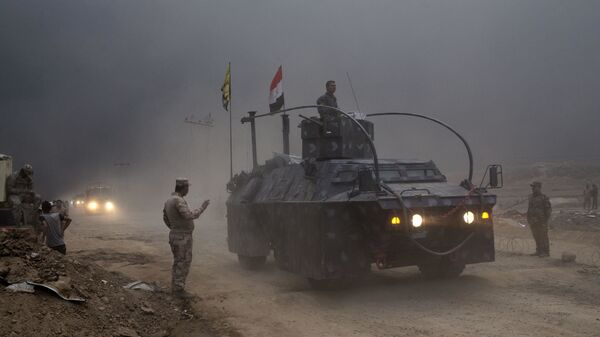 © AP Photo / Marko Drobnjakovic
Subscribe
The Pentagon is capable of conducting simultaneous operations in Mosul and Raqqa, US defense chief Ashton Carter asserted, but journalist Svetlana Kalmykova said that the anti-Daesh offensive in Syria will hardly help to speed things up in Iraq at a time when the operation for Mosul has "floundered," fueling doubts over Washington's "true goals."

'No Way to Avoid It': US Must Work With Russia to Settle Syrian Conflict
"From the strategic point of view, an offensive in Syria will not help the coalition secure the victory over terrorists in Iraq sooner. But this will allow [Washington] to justify increasing Western military presence on the Syrian territory. By the way, without the authorization from Damascus," she wrote in an opinion piece for Sputnik in a piece titled "Neither Here nor There: America's 'Strange War' in Mosul and Raqqa."

On Wednesday, US Secretary of Defense Ashton Carter confirmed that an operation aimed at liberating Raqqa, the so-called capital of Daesh's caliphate, will begin in weeks. The campaign is scheduled to be launched in 2016. This plan, according to Carter, has been in place for months. "We will be capable of resourcing both," he claimed.

Kalmykova pointed to a second possible reason behind the Pentagon's decision to rush into Raqqa.

Aleppo Police Confirm Terrorists Shelled School in City's West
The United States, she said, is trying to "secure a firmer footing in Syria at a time when al-Nusra Front and similar organizations are under threat of being destroyed. They are desperately fighting against the advancing Syrian Arab Army in Aleppo."

The journalist further mentioned a point made earlier by defense analyst Konstantin Sivkov, President of the Academy of Geopolitical Problems, in an interview with Radio Sputnik. He said that what some perceive as Washington's mistakes in Syria and Iraq are in fact "planned" steps aimed at boosting US-backed radical forces.

"It follows then that airstrikes carried out by the US and its allies by mistake are not really accidental. In any case, they necessarily lead to the militants mounting an offensive," she said.

The Pentagon's increasing activities in Syria, Kalmykova added, could be interpreted as an admission that Washington "is extremely concerned" for US-backed rebels in Aleppo.

"But they could also betray their sponsors, like it happened in Iraq where the militants have refused to surrender Mosul. As a result, plans to present the liberated [Iraqi] city to Hillary Clinton ahead of the presidential election have been ultimately derailed," she said.

For his part, journalist Evgeny Krutikov pointed out that Ashton Carter was vague on details when it came to the Raqqa operation, adding that the Pentagon was apparently ready to pit Iraq and Syria against each other.

"The US secretary of defense forgot to mention what army must invade Syria and take Raqqa under control," he wrote for Vzglyad. "Perhaps, he thinks that the Iraqi security forces or the Kurds will become cannon fodder in this operation, but these are nothing more than fantasies."