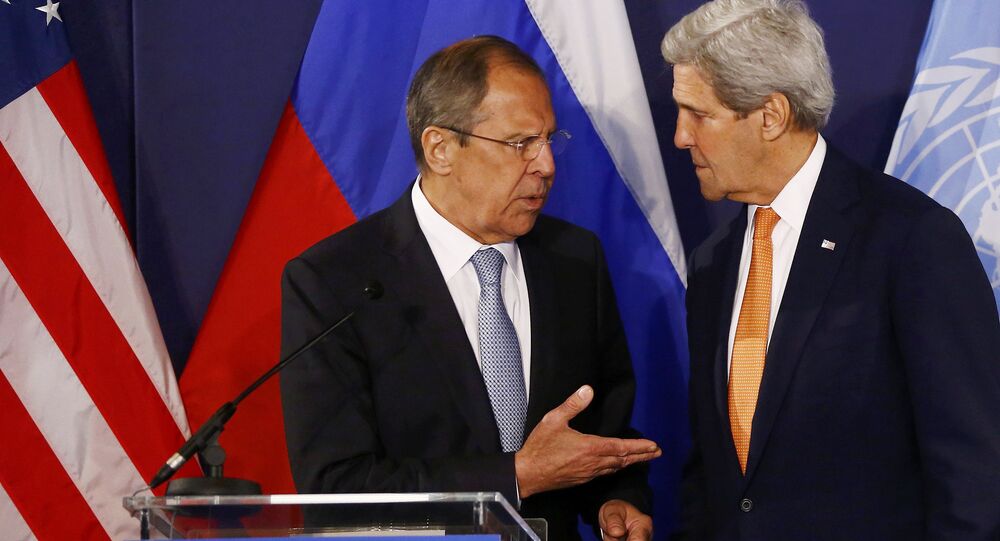 Leaked Syria Ceasefire Agreement Might Be of Benefit to Both US, Assad

On Thursday, the US State Department made public one of the five Syria ceasefire documents agreed upon by Sergei Lavrov and John Kerry on September 9; and while its leak to mass media instead of an official release left Russia's Foreign Ministry puzzled, Russian parliamentary deputies explained who might have benefitted from it.

© REUTERS / Darren Ornitz
Lavrov-Kerry Talks: 'Diplomatic Dancing on Syrian Minefield'
On Thursday, AP news agency published one of five documents from the Russia-US brokered Syria ceasefire deal without revealing how they got their hands on it.

Even though Russia's Foreign Ministry has always encouraged the release of the details of the deal, it was left puzzled why the document was leaked to the media instead of being officially released.

“We believe that the publishing of these documents will contribute directly to their implementation and the way toward the Syrian settlement," Russian Foreign Ministry spokesperson Maria Zakharova said on Thursday after the leak of the document to AP.

Zakharova however said that she was surprised that the documents have been leaked instead of formally released on the official website of the State Department.

“But that represents the style of our American colleagues,” she said.

The document however later appeared on the official website of the US Department of State.

© Sputnik / Michael Alaeddin
No-Fly Zone in Syria to Benefit Terrorists, 'Who Have Everything But Aircraft'
Meanwhile RIA Novosti has discussed the leak with the deputies of the new convocation of Russia's State Duma, the lower chamber of the country's parliament.

Leonid Kalashnikov, first deputy chairman of the Russian State Duma Committee on International Affairs said that the release was unfavorable for the US and the Syrian opposition while it might be to the benefit of President Assad who "might have got tired coping with the US double standards: on the one hand, the US had signed it, on the other, refused to release it."

"I don't think that the US was interested in this release," Kalashnikov told RIA Novosti.

"It might have been more of an interest to President Assad to be able either to urge to stick to the signed accords and fully implement them or put a full stop there and fight further," he added.

First deputy chairman of the state Duma Committee on Defense Andrei Krasov suggested that the release was of benefit to the Americans to be able to accuse Russia and save their face before the Syrian opposition.

© Photo : The Northern Fleet
Fully Armed: Admiral Kuznetsov Carrier Steps In to Support Russia's Anti-Daesh Ops in Syria
"They might have leaked it themselves but could claim that it was Russian hackers who stole the documents and leaked them to AP," the deputy suggested.

"I think that the Americans are pursuing their own interests and want to save face before the opposition," he suggested.

Leonid Kalashnikov further suggested what the US was afraid of should the documents be made public.

Kalashnikov however added that the revealed items of the agreement were "balanced enough" and would have forced both President Assad and the US to make certain concessions, which is an "essential practice in normal negotiations."