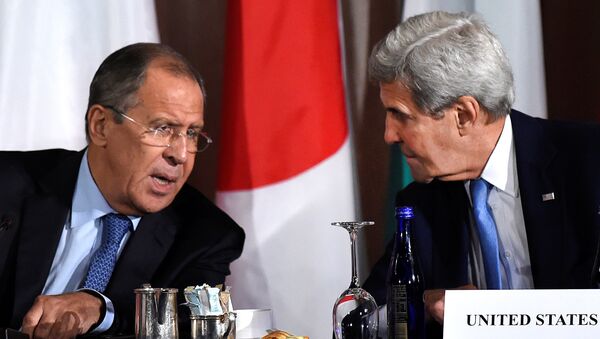 As top diplomats from Russia and the US are set to meet again on Friday for further Syria ceasefire talks, experts analyze the prospects of a cessation of hostilities in the country and what a bilateral agreement between Sergei Lavrov and John Kerry might entail.

US, Russia to ‘Consult’ Again Friday on Syria Ceasefire
Russian Foreign Minister Sergei Lavrov and US Secretary of State John Kerry intend to meet again on Friday to discuss a cessation of hostilities in Syria.

Following the second meeting of the International Syria Support Group (ISSG) on the sidelines of the UN General Assembly on Thursday, Sergei Lavrov noted that its major outcome is that the sides have agreed to continue working on ceasefire in Syria.

Russia's top diplomat however noted that the armed opposition must reciprocate Syrian government peace efforts and not let terrorists benefit from the stalled ceasefire.

"Some of our partners made attempts to force the Syrian government to undertake unilateral steps. We insist, and are being supported in this, that the opposition should make reciprocate steps," Sergei Lavrov told journalists after the meeting.

"They should do it to prevent ISIS (Daesh) and Al-Nusra to exploit lack of ceasefire in Syria. I think we have such common understanding but the details are still needed to be worked out," he added. 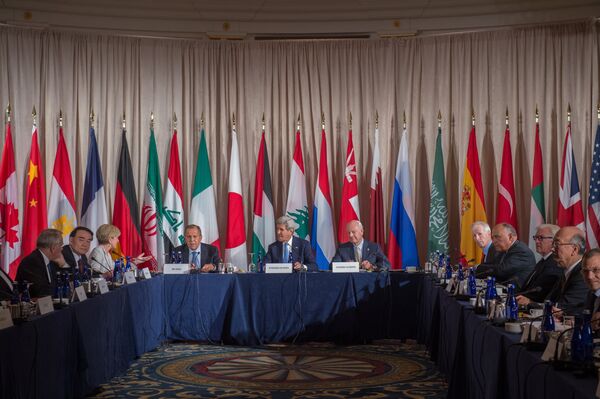 Meanwhile, the US Secretary of State also made a statement after the meeting where he claimed that he and his team "have exchanged ideas with the Russians and plan to consult on Friday with respect to those ideas."

The Washington's foreign policy on Syria seems to look like "if the Russians come back to us with constructive proposals, we will listen."

"If Russia demonstrates that it is serious, we will work with the opposition to reciprocate and to pull back from this cycle of escalation, because the opposition also has a responsibility to observe the cessation of hostilities if the government does and to disassociate from al-Nusra."

In his statement however John Kerry attempted once again to push for what amounts to a 'no-fly zone' — the grounding of all Russian and Syrian aircraft.

"The only way to achieve that [cessation of hostilities and violence] is if the ones who have the air power in this part of the conflict simply stop using it – not for one day or two, but for as long as possible so that everyone can see that they are serious."

Kerry's 'Parallel Universe' in Syria Revealed in 'Scant, Factless Show'
Commenting on the above push, Jim Jatras, a former US diplomat and foreign policy adviser to the Senate GOP leadership called it opportunism.

He referred to Kerry's words that “we all agree that ISIS (Daesh) and Al-Qaeda are our common enemy.”

"How does grounding the Syrian Air Force and Russian Air Force…defeat ISIS, defeat Al-Qaeda? It doesn’t. In effect, they would be the beneficiaries of these policies," Jatras said in his interview with RT.

The former diplomat also commented on the recent attack of the humanitarian convoy in Syria.

"This is the kind of thing we’ve seen so many times before, not only in Syria but in Bosnia, in Kosovo, Libya and other places," he told RT.

"Something happens and within minutes Western officials are saying “this is who is at fault, here is what happened, and here is the blame for it.”

And then only afterwards, "after all the headlines have gone around the world about responsibility, do we hear any argument about what the details are, what might or might have not happened. And those will be on page 19 somewhere," he added.

Syrian Army Announces Major Offensive Against Terrorists in Eastern Aleppo
The former diplomat also referred to the major operation of the Syrian army against terrorists in the eastern outskirts of Aleppo, which it announced on Thursday.

"Let’s be clear: Right now, the Obama administration has one priority and that is to stop eastern Aleppo from falling to Syrian government forces," he said.

Strategically, he explained, if the jihad terrorists lose eastern Aleppo, this war is over. The fighting may go on for a while, but that will be "the tipping point in terms of who is going to win. "

"They can dance around any way they want, but the bottom line is always going to be to try and stop the Syrian and Russian forces from decimating these jihadists and changing the outcome," he stated.

With regards to the Friday meeting of Russia's and US top diplomats, Jatras noted that while Lavrov and Kerry "may seem to agree on various details, in terms of where the two countries want to go in Syria they are poles apart."

"The bottom line for the Obama administration is regime change, which means a jihadist victory in Syria, and that is the rabbit they are constantly trying to pull out of the hat," he said.

US, Russia Have Hours, Days for Make or Break Deal on Syria Ceasefire
"I don’t know why the Russian side keeps talking to them as though they have common goals and interests, when in fact they don’t. They are dealing with ideologues here who are dancing to the tune called by the Saudis and other supporters of radical Islamic forces, and they’ve got to stop entertaining that they can somehow make a deal on this… There are no real moderates. They are all Wahhabists, they’re all terrorists, they’re all jihadists," he finally stated.

While the results of the meeting are still remain to be seen, political analyst Elena Suponina also suggested that it will be hard to avoid new incidents as the two countries "hold talks on the minefield. And this field is called Syria."