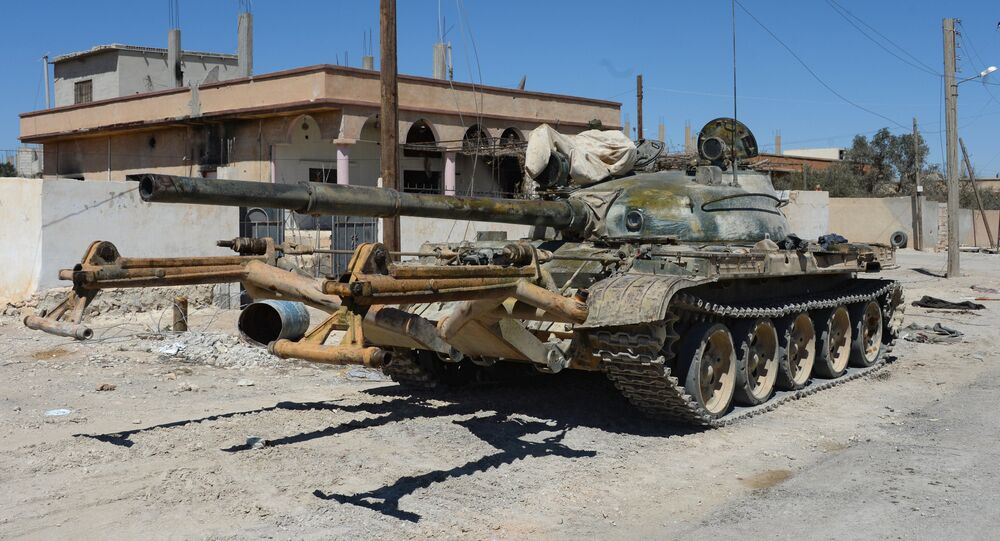 The new US-Russia agreed ceasefire has been generally holding in Syria and, most likely, Moscow and Washington will launch the Joint Implementation Center next week, provided that humanitarian requirements are also met, Russian envoy to the United Nations Vitaly Churkin said.

MOSCOW (Sputnik) – Churkin said that all elements of the US-Russia agreement will kick in, if the humanitarian requirements are met.

"Lately I’ve heard some encouraging news about the humanitarian effort [in Syria]. If the humanitarian effort is going to proceed as planned then hopefully also all other elements [of the US-Russia deal] are going to kick in including the start of the operation of the Joint Implementation Group," Churkin told journalists on Friday, adding that the "cessation of hostilities regime has been holding, for the first 48 hours and another 48 hours…it will be sufficient for the Joint Implementation to go into effect."

© Sputnik / Mikhail Alaeddin
UN Security Council Consultations on Syria Canceled - United Nations
On September 9, Russian Foreign Minister Sergey Lavrov and US Secretary of State John Kerry announced a new peace plan to address the five-year conflict in Syria. The ceasefire stipulated by the agreement came into force on September 12. Humanitarian access, along with seven days of reduced violence, are some of the conditions of the US-Russia deal.

"There is still much to be done by the United States in the separation between al-Nusra and the so-called moderate opposition groups. Now, they have made some steps in that direction but those steps are not sufficient," Churkin stressed on Friday.

Syria has been mired in civil war since 2011, with government forces loyal to President Bashar Assad fighting a number of opposition factions and extremist groups, including Islamic State (IS, also known as Daesh), as well as Jabhat Fatah al Sham (also known as Jabhat al-Nusra, or Nusra Front). The United States has been supporting the so-called "moderate" opposition forces in Syria, while Russia has been supporting Syria's legitimate authorities — the government of Bashar Assad.

© AFP 2020 / GEORGE OURFALIAN
Syria Support Group to Meet in New York on Tuesday, Russia’s Envoy to UN Says
If the conditions of the US-Russia agreement are upheld, particularly the holding of the ceasefire until Monday, September 19, Russia and the United States will work together to establish a Joint Implementation Center and carry out joint airstrikes against terrorist groups in Syria.

The details of the US-Russia agreement on Syria have not been revealed, mainly because of US unwillingness to do so, according to Churkin. UN Security Council (UNSC) consultations on Syria planned for Friday were cancelled because the United States was not prepared to share the documents of the agreement, the Russian envoy told journalists.

"We have no doubt that it [US-Russia agreement] needs to be implemented. If they [Americans] have some doubts, I don’t know. Clearly, there is a lack of unity within the US administration…The deal was made and we expect it to be implemented," Churkin stressed on Friday.

Earlier on Friday, Russian Foreign Minister Sergey Lavrov told US Secretary of State John Kerry in a phone call that the entire package of US-Russian agreements on Syria should be made public. Later in the day, US State Department spokesperson John Kirby stated in a briefing that the United States is still not prepared to publicly release the details of the US-Russia negotiated Syria ceasefire agreement.

US State Dept. Unable to Speak to How Turkey Vets Forces in Syria